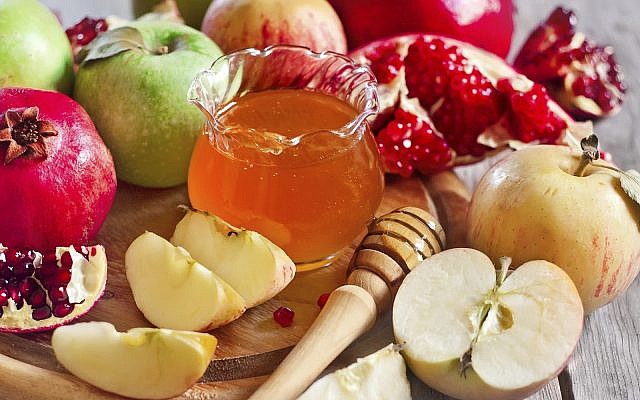 A rebbe was once asked if a non-believing Jew should make a blessing before s/he eats. His answer was: No, because that would be hypocritical (to acknowledge someOne Who one doesn’t recognize) but s/he should pause a second before eating. He called that: the pause that humanizes.

The question I want to raise is, can a Jewish Atheist have a meaningful Rosh Hashanah? I added the word meaningful to make sure we’re not just talking about eating an apple dipped in honey and pomegranate and singing Naomi Shemer‘s

Though, one could do less.

Traditionally, Jews check their ethical and ritual behavior and decide what to improve for the next year, to hopefully merit to stay alive. Maybe more importantly, we should do so, not just to prolong our days on earth but also to increase their value and meaning.

Smart people make only tiny new year’s resolutions. When we delivered them, we can plan a next step. Big pledges are bound to fail, as the saying goes: the way to Hell is paved with good intentions.

A popular trick to check our “Soul” is to see how we do with different Commandments. However, that should not charm your average Jewish Atheist. Let me suggest an alternative that should work for them.

So, I see a very meaningful Rosh Hashanah preparation for the average Jewish Atheist of checking how they are doing in their relationships. How do you treat your close ones? (If you don’t have any, what are you going to do to get them?) How do you relate to people who are dependent on you (spouse, kids, waiter, cleaner)? How well do you ignore stereotypes and go against your set expectations of others? Do you treat everyone as valuable, worthy of your respect, as an equal, as an honor to meet? How well are you at being humble and not having to resort to anger or threats to feel safe and communicate gently what you want to say? Which people from oppressed groups make you feel uncomfortable and are under-represented in your life (Blacks, Gays, the Handicapped)? Do you prioritize hanging out with people who see you and treat you well? Are you generous enough to others, in money, time  and friendliness?

Will you just plod on the rest of your days, until your life comes to a hold, or will you rise to the occasion and make an effort to improve yourself?

These are not just private exercises for Atheists to excel in. Religious folks should ask non-believers to teach them these things more deeply.

I wish everyone a good and sweet Jewish New Year – especially Atheists!