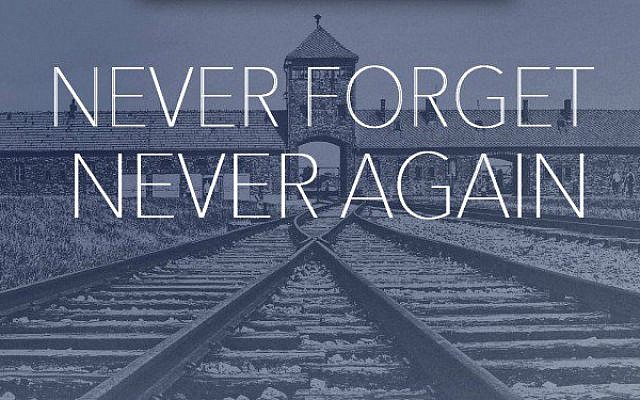 Last week, Deborah Lipstadt, Professor of Modern Jewish History and Holocaust Studies, wrote a very powerful and popular article entitled, “Jewish Myopia in a Perfect Storm of Antisemitism.”  In this article, she described the confluence of many different factors, from the political left to the political right to Islamic fundamentalism, that have helped fuel an increase in antisemitism.  She also blamed Israel’s political leadership for cozying up to authoritarian leaders of countries that have incited antisemitism and that have engaged in efforts to deny responsibility of their countries’ role in the Holocaust.

When we consider that the last of the Holocaust survivors are dying out, how a recent CNN poll showed that 66% of millennials could not identify what the Auschwitz concentration and death camp was and how a third of European respondents to a poll knew just a little or nothing at all about the Holocaust, we know that as Jews we must affirm, “Never again.” We must spot the seeds of antisemitism as they begin to sprout and crush these seeds before they grow.  We must redouble our efforts in this climate of increasing antisemitism and extremism to protect ourselves.  And yet, our responsibility as Torah observant Jews is much greater.

The Torah has a perspective on how we respond to tragedies, because, after all, we experienced a tragedy literally of Biblical proportions when we were enslaved in Egypt, and Pharaoh attempted to commit genocide against our people by ordering the death of all baby boys.  What should be our response to this suffering under a brutal Egyptian regime?  Revenge?  Never again?  We must develop a strong Jewish military?

Immediately after God set down the basic principles of governing our nation through the Ten Commandments, He legislated societal laws that are necessary for any functioning society in Parshat Mishpatim, beginning with the laws of slavery.  In his work, “Exodus and Revolution,” written by Michael Walzer, one of America’s foremost political thinkers, Walzer proudly asserted that the exodus and the remembrance of Egyptian slavery shaped an ethic of compassion rooted in Jewish identification with this nation’s history as slaves.  Rabbi Shalom Carmy and Dr. Brachi Elitzur have written articles here and here that assert that the brutality of the slavery is not emphasized shortly after the exodus in Sefer Shemot to the generation of adults that left Egypt, but it is emphasized in Sefer Devarim to the generation of children that left Egypt who are now adults forty years later.  As an example, the phrase of “v’zacharta ki eved hayita b’Mitzrayim” – “and you should remember that you were slaves in Egypt,” is not mentioned once in Sefer Shemot, Vayikra or Bamidbar, but it is mentioned five times in Sefer Devarim as a reason to care about the dignity or others and to not to mistreat the stranger.  As many Biblical commentators pointed out, initially after we emerged from Egyptian slavery, we still possessed a slave mentality, and perhaps this led to feelings of shame and degradation in fully reliving the pain of slavery.  So the Torah begins Parshat Mishpatim with the laws of slavery, highlighting the fact that we care about the treatment of the slave, but the emphasis on the pain and suffering of the slave in Parshat Mishpatim is muted until subsequent discussions in Sefer Devarim.  Ultimately, though, the Torah transformed this national tragedy into something positive, into an ethic of compassion for the underprivileged, the vulnerable and the helpless.

Similarly, after the Holocaust, many of the founders of the state of Israel viewed those Jews who died in the Holocaust as representing the old, weak Jew and the founders were embarrassed of them.  In fact, when the founders of the state of Israel wanted to establish a date to commemorate this tragedy, they selected a date that commemorated the most significant act of Jewish strength and heroism in the Holocaust, the Warsaw Uprising.  THeir motto was highlight the strength and hide the weakness.    Additionally, many survivors did not speak about their experiences in the Holocaust until the Eichmann trial because they were initially too ashamed of the tragedy to speak about it.  But once we talk about it, what should our message be?  Never again?  Jewish military strength?  Fight to protect our people?  These are very important messages, but the Torah demands more.

I was listening to a podcast by Yoram Hazony who compared John Locke’s political worldview which many people claim is the basis for a liberal government with the Torah’s political worldview.  Locke believed that the purpose of government is to protect those natural rights that individuals cannot effectively protect alone.  That is an important value, but the Torah has a higher standard.  God told Avraham Avinu to leave his land, his birthplace and his father’s house to father a new nation.  If the goal of government is protection of individual rights, then why should Avraham leave his sole source of protection, his homeland, and journey to a faraway unknown land?  The answer is that, “v’e’escha l’goi gadol” –  Avraham will father a great nation, a nation later referred to as a “mamlechet Kohanim v’goi kadosh” – a kingdom of priests and a holy nation.  “Va’a’gadla shmecha” – God will make Avraham famous, such that “v’nivr’chu v’cha kol mish’p’chot ha’adama” – through Avraham all nations will be blessed.  The primary goal of Avraham’s nation, of an authentic Jewish government, is not to protect the natural rights of the individuals of that nation, but it’s to teach the world and to be a source of blessing to the world.  We do that by transforming everything that happens to us, even our slavery in Egypt, into something positive.

Holocaust memory is about learning what leads to antisemitism and learning how to protect ourselves from antisemitism.  But it’s a lot more than that.  Holocaust memory is about responding to genocide, bigotry, hate and intolerance throughout the world and not simply say that everyone hates the Jews and other minorities and we can’t change that so we can only try to protect ourselves.  I believe that it was the Jewish ethic of compassion, tolerance and equality that eventually paved the way to abolish slavery throughout the world and I believe that it is our continued persistence to fight for the dignity of others that will eventually win the day.  It may take a long time, years or even decades, but we will win.  The truth is that we have no choice, because this is our sacred mission.