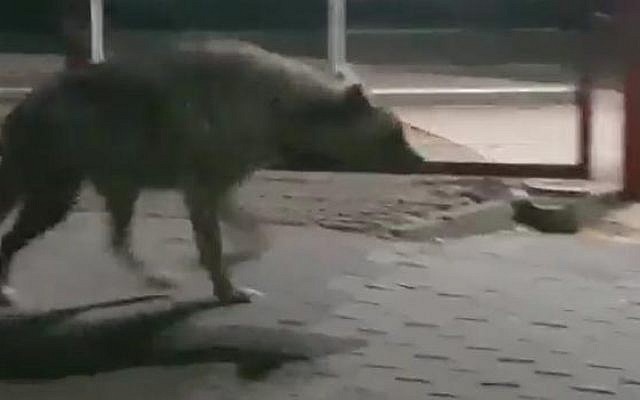 The growing clash between Israelis and their natural world

My city of Modi’in is abuzz over a recent court order for the capture and deportation of Rutti from her home in the sleepy Reut neighborhood. Rutti is a 1-and-a-half year old, locally-born female hyena and by all accounts a very friendly animal. The court’s decision sparked a heated debate, something rare in the otherwise complacent bedroom community: does a wild predator’s presence constitute an unacceptable danger to the public? Or should we learn to live together with the indigenous representatives of the animal kingdom? These are difficult dilemmas. In truth, Rutti’s predicament raises far more troubling questions.

The facts of the controversy are not in question: the southern hills of Modi’in are one of the last ecological corridors in the center of Israel. Alongside magnificent archaeological ruins from the days of the Maccabees is an extraordinary ecosystem of gerbils, gazelles, foxes, jackals and…. four hyenas. Then Rutti was born, and there were five. Too many, apparently, for the carrying capacity of a relatively small habitat.

Despite the bad “rap” hyenas get and Whoopi Goldberg’s demonic caricature in The Lion King, hyenas are not as pernicious as their reputations. They are scavengers, who only rarely attack humans. They perform an ecologically critical role by ridding the landscape of rotting carcasses that could otherwise become vectors of disease. They are feminists – working well together, because unlike most species, an alpha female runs the pack. And yes – their “giggle vocalization abilities” give the impression that they really know how to laugh.

Hyenas are also resourceful. When Rutti realized that there wasn’t enough room for her, she looked over the hills and saw the handsome duplexes of Reut, a community built to house some of the country’s most storied military officers. Her keen sense of smell led her to their trash cans, which offered an “all you can eat buffet” that was too good to be true! Rutti didn’t think twice.

With a full belly, single and fancy-free, she wandered the suburban streets and parks in the evening hours, stretching her legs, getting to know the neighborhood. Many of her new neighbors, however, were not charmed. Irate phone calls to the local wildlife authorities from terrified residents demanded Rutti’s immediately removal. The Nature and Parks Authority sent in its rangers and veterinary team, capturing the wayward animal, returning her to the city’s surrounding open spaces. But Rutti, apparently, could not forget the delicious fixings in the local garbage. She had little trouble returning to her old haunts, greeting astonished citizens of Reut once again.

With a transmitter strapped around her neck, Rutti was easy to track down. Once more she was taken to her original habitat. But soon she found her way back to Reut and an increasingly large group of devoted followers – and hostile antagonists. That’s when the lawyers got involved. They filed a suit against the Nature and Parks Authority, demanding that it take the beast far enough away that she never disturb their safe suburban lives again. Rutti, naturally, could not afford an attorney. And so, the rangers are now required to move the young hyena way down south, to the Yotvata Hai-Bar reserve, outside of Eilat. There, they claim they will try to prepare her for life in the wild.

The competing praise and insults by Rutti’s fans and detractors made their way to the local newspaper: Dozens of young people were fascinated and inspired by this spirited animal, who livened up their otherwise humdrum community. Having been born to hyenas who enjoyed far more temperate climates than the southern packs down south, they feared for her life. Either she would starve to death or be torn apart by unfriendly local packs. Worse yet, maybe she would never be deemed ready for prime time. This would leave her doomed to a life sentence in the Hai Bar’s “Predator’s Center.” The Center essentially is an appalling example of how zoos should not be designed: agitated animals pace in small enclosures and are deprived of a minimally acceptable space and lifestyle. 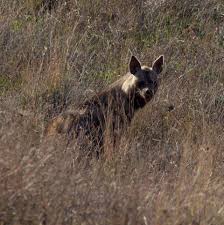 Philosophically, the “pro-Rutti” camp is Romantic: humans chose to move onto lands that had always provided habitat to large mammals. Given Israel’s diminutive dimensions, we have to learn to live together, much as the ancients lived in harmony with a much larger cast of predators that included lions, cheetahs and bears.

Thirty-five years ago, E.O. Wilson, the great American ecologist, introduced the “biophilia hypothesis.” Technically the word biophilia means a love of life or living systems. Wilson argued that human beings are born with an innate instinct to seek a relationship with the natural world. It is manifested in children’s connection to their teddy bear; or the modern pet industry and society’s affinity for cats and dogs. For nature lovers, Rutti, represents the “real deal” – a reminder that we too are wild mammals who should seek fellowship and show loyalty to our fellow creatures.

The anti-Rutti camp paternalistically claims that it has her best interests at heart. Loitering around town, it is only a matter of time until she is run over by a car; or when a small child or poodle will become too tempting to turn down for lunch. Tracking her movements through the transmitter, Rutti’s routine in Reut appears much closer to a feral house cat than that of a wild predator. There is nothing edifying or noble about leaving this disaster waiting to happen. And yes – people have a right to be frightened. After all, a quick google search reveals several cases of hyenas turning on children or sickly adults.

Both sides represent legitimate perspectives. The problem is that today’s errant hyena constitutes a warning of a far more disconcerting tomorrow: Every year about 20 square kilometers of open space disappear in Israel. Israel’s heartland is giving way to expanding urban areas and the roads that link cities together. Israel is blessed with an astonishing biodiversity which includes some 115 mammal species. But as the human population swells at the expense of local habitats – the animals have no place to go. And so they slowly perish.

Rutti reminds us that the writing is on the wall. As Israel’s population increases, the land of Israel will have less and less room for nature. It will be a more crowded and disagreeable country. As author Yizhar Smilansky warned in 1962, it will be a “hotel” and not a “homeland.” Without the wild populations who have called it their home from time immemorial, Israel will be a far lonelier place.