Only after we arrived at the massive base “somewhere in the Negev” for our Milluim we were told that we would be going to a small isolated group of tents in the middle of nowhere. Upon arrival at our million star accommodation the folks in our unit started asking if anyone had brought a Chanukia (aka Menorah). One guy strangely had brought candles, but no one had a Chanukia.

One of my lasting memories of the combat medics course I took during my regular service was the phrase, “a good medic knows how to improvise.” That day we had “live fire” exercises with a lot of different ordinance.   I collected nine 0.5 cases from the big Browning machine gun we were using and the links from the sand and reconnected them. I realised that the diameter was too big for the Chanukah candles. So at first I tried 5.56 from our M16’s but that went straight in the opening of the 0.5. I then tried 7.62 from the MAG light machine gun and “walla!” The rest is history. 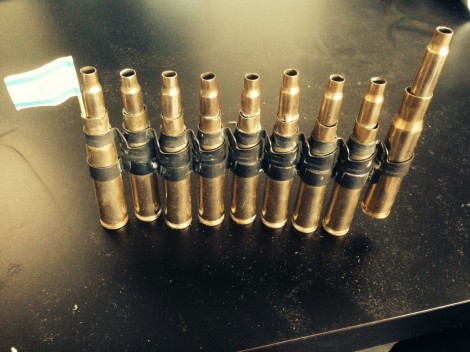 I vividly remember that night lighting that Chanukia for my combat unit in the middle of the desert and singing together with my fellow IDF brothers-in-arms from all different ethnic and religious backgrounds the Al Hanissim (“for the miracles”) prayer of Chanukah and thinking of the significance of the words. “The few against the many…in those days and at this time.”

I recall standing on that very special Chanukah night, wearing the most meaningful suit of clothes I have ever had the honour to wear, the IDF uniform, under starlit sky of the Negev desert.  I heard the sounds of modern Jewish fighters singing about ancient military victories against seemingly insurmountable odds ringing in my ears. At that profound moment, as I sailed back over the seas of our history to the Hebrew warriors of the Hasmonean revolt I understood what it meant to be, in the words of Yonatan Netanyahu, “a link in the chain of Jewish continuity.”

In Israel today, Chanukah has become a holiday that inspires the modern nation, as it commemorates the ancient struggle for independence. Today’s Israelis see themselves as successors to the Maccabees; the few who won their freedom and independence.”