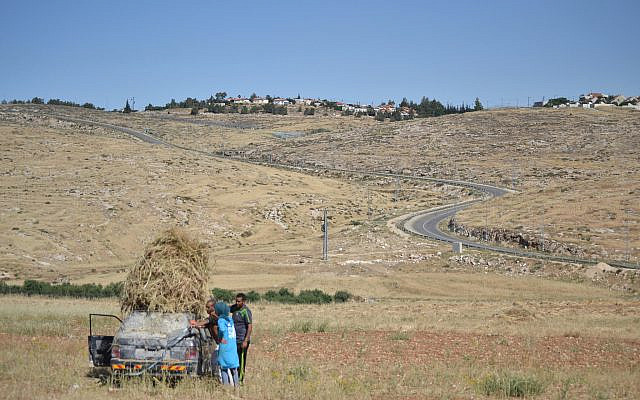 On the day we call Shemini Atzeret but which in Israel is Simchat Torah, the Rejoicing of the Law, some residents of a settlement south of Hebron, known as Avigayil, took time off from celebrating the festival to go on a rampage at the nearby Palestinian village of Mufagara.

Although some people have described the incident as a pogrom, no one was killed, but the settlers threw stones at the villagers leaving one child with head injuries leading to a haemorrhage in his skull which necessitated his being transferred to Beer Sheva hospital. His mother as a Palestinian resident of the West Bank was not permitted to accompany him. They smashed windows of houses in the village, vandalised cars, rolled some down the valley, killed livestock belonging to the villagers, and severed water pipes. As is usual with violence against Palestinians, the incident has  received very little coverage in the, supposedly anti-Israel, British Press and none at all in the Jewish communal Press.

Several shocking things stand out. Avigayil is a settlement which is illegal even under Israeli law and was scheduled for demolition under the road map in 2003. Not only has it not been demolished, it is linked in to the Israeli national grid for both electricity and water, whereas the neighbouring Palestinian village has neither. This makes the severing of water pipes to the village by the settlers particularly  sinister. Water is vital for life in that parched area. The average Palestinian has 28 litres of water for his use per day, whereas the average settler has 211 litres. Such gross inequality is not much mentioned. Cut off the supply of water to the village and the residents will simply have to leave – which is, of course, the settlers aim.

More shocking still, is the attitude of the army. They were present at this incident but did nothing to restrain the settlers. Pictures have been shown of settlers, or at least nonmilitary men, carrying military ordnance, some of which was used to attack the villagers. Those villagers, who retaliated by throwing stones at their attackers, had tear gas fired at them by the soldiers.

None of this is a one off.

When the settlement project began in the sixties and seventies the army saw their role as neutral enforcers of the law. In recent confrontations, however, the army have increasingly been seen as allies of the settlers, rather than enforcers of the law. In an encouraging sign, however, the Head of Central Command Aluf (Major General) Yehudah Fuchs visited the village after the incident. Although he stayed for only a quarter of an hour, he did say that the job of the army is to protect all the residents. Although this seems obvious, it is important, as this is not the first attack from these quarters and almost certainly will not be the last. The villagers have no illusions. Whilst they do not want to move they know that staying will not be easy.

Another question should occur to those of us who are observant. Clearly these vandals, prepared to desecrate the festival to damage their neighbours property and create mayhem, were not the most strictly observant Jews. But did we need this episode to know this? They were living in a settlement that was illegal under Israeli law. Therefore they were defying the law of the law which in Jewish law is binding on all subjects. But is a settlement like this, in any case, legal under Jewish law?  Theft from a non- Jew is not permitted under halachah, (Jewish law) even by the most nationalist authorities. I am no halakhist but surely settling on land without the consent of the previous owner/occupant and without paying him any compensation whatsoever should not be permitted. Some argue that the land Avigayil was built on was not anyone’s property before the settlers arrives. In part, this is plainly moot, since it is generally acknowledged that some settlements are built on private land. But even those, that are not built on private land, are built on land held for the benefit of the community and when settlers come and seize it the community is deprived of an asset.

It is not likely that we will hear anything from our religious leaders. In the first place these stories, like the killing of Eyad Hallaq, don’t get any publicity. Few people know about them, fewer still care. Those non-Jews who do care can be dismissed as anti-Semites and the Jews can be dismissed as self-hating liberals. Those claims that get through can be fobbed off with whataboutery; after all it is undoubtedly true that far worse things are happening in other countries. We can be sure our leaders’ docile consciences will not be too troubled.

PS. Since writing this article there appears to be a major piece of good news. Major General Fuchs has announced that Mufagara will be entitled to the same amount of water as the settlements around it. A small step but a significant one. Possibly as a result of demonstrations by concerned Israelis the General has looked at the villagers and seen people with needs, rather than an adversary to be crushed. He should be applauded as should all those who took up the villagers cause.