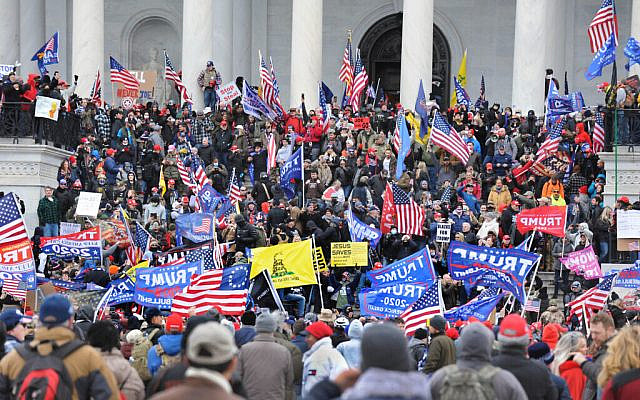 The Pro-Trump rally at the US Capitol, Washington DC on January 6, 2021 (Lloyd Wolf via JTA)

“Rabbi, I won’t be in class tomorrow, I’m traveling to Washington for the Trump rally.” That was one of the few text messages I received from students in Los Angeles, Chicago and Florida on January 5th, 2021. I laughed them off, thinking that this was the “Trumpers’” last hurrah before the Biden administration began governing two weeks later. I couldn’t have been more wrong. The next night I watched in Israel, aghast, worried and scared as the first images of the riots flashed across the screen in my study.

I gathered my family to explain to them — in real time — that we could possibly be watching the downfall of America. I have escorted my students through the Capitol countless times, hundreds of Congresspeople have spoken to us, and we’ve even prayed as a “minyan” five times at midnight on the floor of the House. The House is a holy fortress, to watch it desecrated by violence and destruction seemed nightmarish. Where would this end? Why wasn’t the president telling them to stop? Where was the army?!

Thankfully, America survived January 6th and in the early morning hours of January 7th, then-vice president Pence, Speaker Pelosi and the American Congress ratified the 2020 presidential election. I taught my students that week and ever since, that they watched an attack on American democracy on January 6th and even the most ardent supporters of then-president Trump should have been disconsolate over the events that day.

Supporting the riots in Congress on January 6th or the absurd notion the election was stolen contradicts everything educators stand for; facts, intellectual honesty, and civil discourse. Politicians who are leaders and push citizens to be better people, and peddle the lie of a stolen election, whether because they believe it or for political expediency, should be ashamed of themselves.

AIPAC, the American Israel Political Affairs Committee, has always been loyal to the principle that it only discusses the US-Israel relationship. I’ve been to over 30 AIPAC conferences, attended countless events and read thousands of emails (yes, we read them!), and except for an outside speaker breaking their promise not to discuss other issues, I’ve never heard a word about other issues at an AIPAC event. AIPAC’s members know that AIPAC only discusses the US-Israel relationship.

I understand Americans who want every single elected official who expressed support for the January 6th riots and the idea of a stolen election out of office. This issue goes to the heart of America’s very democracy and America’s values. I don’t question any voter who prioritizes this issue. As one of my friends tweeted to me in a language I could relate to, “This is the entire [American] Torah.”

Hailie Soifer is the CEO of the Jewish Democratic Council of America. Ms. Soifer is a lover of Israel and a leader I greatly respect. I’ve asked her to speak to my students and some of my best students have gone to work for her and her organization. She recently penned an op-ed criticizing AIPAC for endorsing candidates who she characterizes as aligning with insurrectionists and white supremacists. She is referring to Republicans who she feels supported the January 6th riots and the position that the 2020 election was stolen.

As much as I respect Ms. Soifer, I disagree with her criticism that AIPAC shouldn’t endorse pro-Israel candidates who she feels supported the January 6th riots and the position that the 2020 election was stolen. As my words above demonstrate, my disagreement with her position doesn’t stem from not taking the issue seriously.

As an American and an AIPAC member, I value the role AIPAC plays by endorsing candidates based on one litmus test only – whether they support the US-Israel relationship. As an educated voter I can balance various issues important to me myself, I don’t need AIPAC to play that role. In addition, as an Israeli, I perceive Ms. Soifer as putting American domestic issues above support of Israel. Ms. Soifer, and every American, have every right to balance different priorities when deciding which candidates to support. I’d never tell another American how they should vote, but as an Israeli, the message I hear from Ms. Soifer and those who agree with her, is loud and clear – there are American domestic issues that take priority over our support of Israel. This isn’t a confidence building or unifying message.

I look forward to a day when support of the US-Israel relationship returns as a bipartisan issue and Republicans and Democrats stop using it as a wedge issue. As an independent, I watch both parties blame the other for making support of Israel a wedge issue, but I blame both parties. American support of Israel is a no-brainer; America and Israel share values, strategic objectives and unfortunately, enemies. All Americans should support Israel.