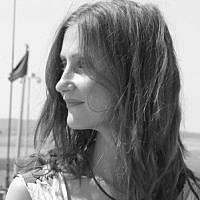 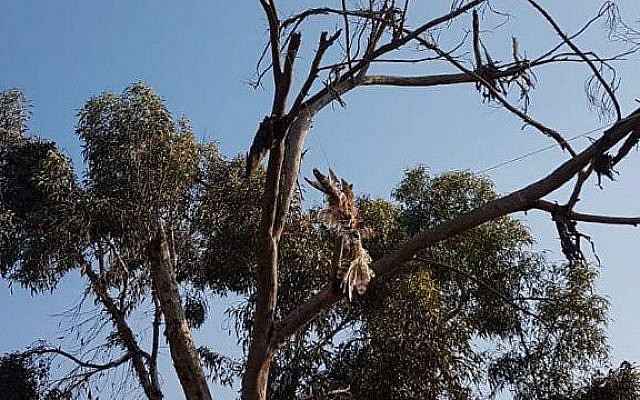 A falcon found dead in a tree, tied to an incendiary device, on July 16, 2018, near the Gaza border. (Nature and Parks Authority via The Times of Israel)

I am a firm believer that we humans need to be the voice of those who cannot speak for themselves. Our furry, scaly, feathered, four legged, eight legged, carnivore, herb,ivore, amphibious, flying, nocturnal, diurnal, horned, spotted, striped, maned and all around exquisite animal friends.

We can all wonder at the majestic falcon as it flies and swoops so elegantly as it hunts its prey.

Sadly, these noble feathered predators have now become the prey.

Not content with sending kites, balloons, condoms (yes, you read right) with incendiary devices attached to them, arson terrorists in the Gaza strip have now attached these to falcons with the aim of destroying thousands of acres of Israeli agricultural land and nature reserves.

The south has been burning for several weeks, killing wildlife and destroying farmlands. Now many of you think that this is all in the name of “resistance” or “peaceful protests.”

Those who love the land don’t burn it.

At first “protestors” set fires to rubber tires, creating an environmental hazard. Turkeys choked to death on the fumes. Nobody said a word.

At one “peaceful protest,” a donkey was set on fire. The poor, tortured creature was still alive.  Nobody said a word.

And now these incredible raptors have been turned into Molotov cocktails. Will you continue to be silent?

We Israelis have become quite cynical when it comes to the silence of the world. We are well aware of the double standards of human rights activists who have excluded us from the family of nations. This past weekend nearly 200 rockets and mortars rained down on our terrified citizens who scrambled for their shelters. The world was silent. Did you know that these weapons are stored and fired from within civilian infrastructure including the zoo?

Continued silence sanctions this behaviour. This is not about being desperate or resistance, this is depraved torture.

You may not like our politics and prefer to stay out of conflicts that involve humans, but I appeal to you, the environmentalists, eco-warriors, animal activists and even my fellow bunny-huggers, for the love of G-d, say something, stand up to this abject cruelty against those who cannot speak for themselves — our animals.

About the Author
Rolene Marks is a passionate advocate for Israel and has appeared on radio, television and has been published in numerous publications. Rolene is a member of the Media Team Israel, an advocacy body that fights media bias against Israel.
Related Topics
Related Posts
Comments