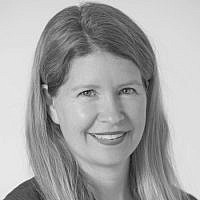 The Blogs
Lisa J. Silverman
Apply for a Blog
Advertisement
Please note that the posts on The Blogs are contributed by third parties. The opinions, facts and any media content in them are presented solely by the authors, and neither The Times of Israel nor its partners assume any responsibility for them. Please contact us in case of abuse. In case of abuse,
Report this post.

When you asserted last Wednesday that Israel’s first prime minister, David Ben-Gurion, should have “finished the job” by expelling all Arabs from the country when it was founded, what immediately came to mind was Pirkei Avot (Ethics of the Fathers) 2:16:

“You are not required to finish your work, yet neither are you permitted to desist from it.”

The real “job” is the complete opposite of the one that you invoked while speaking from the Knesset plenum. Your inflammatory comments should be easy for anyone to condemn. But they struck a particularly personal nerve for me due to the work I am honored and humbled to perform in support of the University of Haifa, whose campus is a place where Jewish-Arab coexistence is not only an aspiration but a way of life.

Our diverse community of 18,000 students hails from all of Israel, but mostly from the northern periphery. They represent the fabric of Israel, and yet most of them are the first members of their families to pursue higher education. They come to the University of Haifa in part because, as the university did for one of its high-profile alumni, Minister of Education Yifat Shasha-Biton, the experience of rigorous academic work propels them into compelling careers and higher on the socioeconomic ladder.

Further, these students come to University of Haifa to study with our faculty, who also embody the institution’s commitments to diversity and social mobility. As neurobiology professor, Dr. Mouna Maroun, head of the Committee for Enhancing Accessibility of Higher Education to the Israeli Arab Population, has poignantly said, “As an Arab woman, my belief is that the revolution towards gender and ethnical equality starts top-down at the academic institutes. Active recruitment of excellent women — Jewish, Arabs, Ethiopians, and Haredim — as faculty members, especially in sciences and technology, is one of the first steps to ensure the representation of women in higher education and to convey a clear message to the young generation that there is no glass roof for a girl’s dream.”

To start, our student diversity can easily be seen on paper. More than 32 percent of the university’s students are Arab, including more than 40 percent of its undergraduates, far exceeding the Arab population share of Israel as a whole.

Yet the commitment to diversity goes far beyond enrollment numbers. We understand that our work as Jewish Israelis is to make peace — for us, for our children, for our region, and for our world. This directive translates not to “finishing the job” by throwing out Arabs, but rather working towards the finish line of peace. And what exists across that finish line is a day when Jews and Arab flourish together — not only coexist — in all aspects of life.

This work can only be accomplished by bringing diverse populations together in every possible environment and context — through personal interactions, through students studying side by side and performing community service side by side, through researchers conducting experiments for the betterment of humanity side by side, through faculty members designing curricula side by side.

This mission is also accomplished even more proactively through initiatives that are specifically designed to foster coexistence, such as our Jewish-Arab Community Leadership Program, which facilitates dialogue and multicultural social interaction between Jewish and Arab students. Students who are active in the program work to bring about improvement in the social and educational conditions of the mixed Jewish-Arab population in the city of Haifa through joint community projects, while developing and raising social community initiatives among the Jewish and Arab student populations on campus. Jewish and Arab students also engage in meaningful and impactful collaboration through the university’s Haifa Innovation Labs, a start-up incubator whose programs focus on social innovation and impact entrepreneurship.

This is our work. We will not likely finish it, but we must not desist from it or worse, detract from it. And yes, as a public servant, it is also the “job” that you should actually be trying to finish.

MK Smotrich, I welcome you to join us in this work. Come to the University of Haifa campus to witness it for yourself. Engage in the work that none of us are permitted to desist from.

About the Author
Lisa J. Silverman is CEO of the American Society of the University of Haifa.
Related Topics
Related Posts
Comments