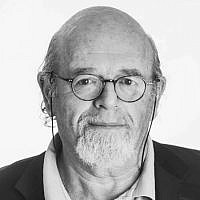 The Blogs
Alan Baker
Apply for a Blog
Please note that the posts on The Blogs are contributed by third parties. The opinions, facts and any media content in them are presented solely by the authors, and neither The Times of Israel nor its partners assume any responsibility for them. Please contact us in case of abuse. In case of abuse,
Report this post.

Dear Board Members of Ben & Jerry’s,

In today’s ruthless, global, cut-throat business environment, it is refreshing and impressive to see your company’s accentuation on social justice causes as a foundation for maintaining brand integrity and corporate core values, as well as improving the quality of life locally, nationally and internationally.

Advancing such genuine values as human rights and dignity, supporting social and economic justice and protecting and restoring the Earth’s natural systems – all have the potential of rendering the taste and quality of your ice-cream products more palatable, both literally and figuratively.

However, when it becomes evident that such noble values are tainted by naïve or deliberate misinformation, by manipulation and political pressure of agenda-driven groups and individuals, or by a prevailing, consistently held and discriminatory political fixation entertained by members of your board, then the taste of your product becomes sour, its brand integrity flawed and its quality polluted.

To claim that your company and its founders are based on principle and integrity, would regrettably appear to be misleading.

Your decision to end business in “Occupied Palestinian Territory” is based on what you perceive to be the notion that “a majority of the international community, including the United Nations, deems to be an illegal occupation”.

But this premise is patently inaccurate, mistaken and misleading, inasmuch as it relies on non-obligatory UN resolutions, adopted by an automatic and political majority that cannot claim to determine legality or illegality of Israel’s presence in the territory.

On the contrary, your decision ignores the legally acknowledged fact that the Palestinians themselves and Israel have agreed, in the internationally sanctioned Oslo Accords, to divide the governance of the territories between them pending completion of their mutual negotiation on permanent status of the territories.

Your determination that the territories are “illegally occupied”, and are “Palestinian” is simply wrong, and presumes to prejudge the outcome of the agreed-upon negotiation process and predetermine their legal status. As such your reasoning for ending business in the territory is based on a false premise and runs counter to the Palestinians’ own wishes and legal obligations, in the Oslo Accords.

Your additional reason for ending business in the territories, that Israel’s policies “violate basic human rights of the Palestinian people”. This is, by the same token, based on flawed, wildly biased and misleading propaganda by curious, fringe movements such as “Vermonters for Justice in Palestine” and others that appear to be manipulating your decisions.

Such elements openly peddle in irresponsible, one-sided and misleading propaganda against Israel on the flawed and spurious assumption that ending Israel’s occupation, or Israel’s very existence will, in and of itself, bring about peace.

They choose to ignore the realities of the situation in the Middle East, and the extent and volume of Palestinian terror and violence directed against Israel’s civilian population through indiscriminate firing of rockets, deliberate pollution of Israel’s atmosphere by massive burning of tires, deliberate aiming of incendiary balloons into Israel’s territory with the intention of causing civilian casualties, burning fields, orchards and agricultural produce, as well as killing wildlife.

One might have expected that an environmentally conscious company like Ben & Jerry’s would be concerned by such blatant Palestinian humanitarian, environmental and agricultural violations.

Above all, one might have expected that Ben & Jerry’s would take into account that any progress toward peace between the Palestinian and Israeli peoples can come about only as a result of bona fide negotiation between them and a genuine political will to achieve peace.

Peace cannot be advanced through adhering to the irresponsible directives of the BDS (boycott, divestment and sanctions) movement whose aims are the undermining of Israel’s very existence. It cannot be advanced through a one-sided, discriminatory commercial boycott by Ben & Jerry’s that achieves nothing more than to send a message to the Palestinian leadership by proffering support for their continuing hostility and intransigence.

By taking the action that you have taken, by permitting yourselves to be manipulated, you will not advance peace by one iota. You are not only depriving a warm and willing population of a product that it has always loved, but you are also threatening the livelihood of loyal and devoted workers, mostly from immigrant families as well as from among the Palestinian population of Israel and the territories.

By taking such action, despite any honest and noble intentions that you claim to have, and whether you intend or not, you are in fact unavoidably labelling yourselves as an openly anti-Israel company. The actions you are taking are distinctly and solely directed against Israel and as such are inherently discriminatory. They do not represent the realization of similar values vis-à-vis other countries to which you supply your product, that have serious human rights records.

Through such discrimination and singling-out of Israel, you are in fact, possibly unintentionally, but nevertheless allowing yourselves to be perceived by the many elements in international society that maintain a strong hostility towards Israel and the Jewish People, as meriting the regrettable and ugly blemish of anti-Semitism.

About the Author
Alan Baker is an Israeli expert in international law and former ambassador of the state of Israel to Canada. He directs the Institute for Contemporary Affairs at the Jerusalem Center for Public Affairs.
Related Topics
Related Posts
Comments