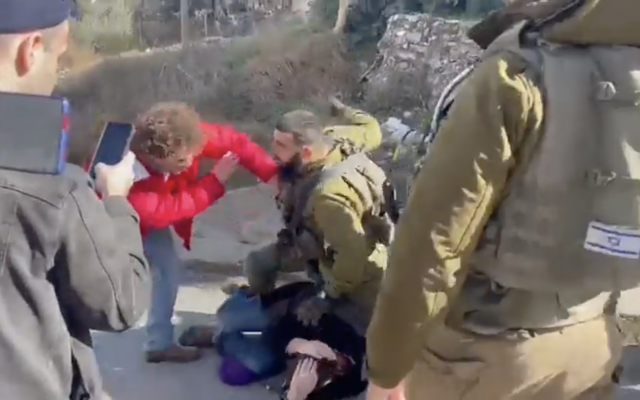 An Israeli soldier is seen punching a left-wing activist in Hebron in the West Bank, November 25, 2022. (Breaking the Silence)

In 1945, when philosopher Karl Popper published ‘The Open Society and its Enemies,’ his landmark critique of historicist philosophy, he probably did not suspect that only three years later a Jewish state would be established in a distant part of the Middle East. On the other hand, perhaps he did. Because he was Jewish he had been obliged to flee his birthplace Vienna, finding refuge first in New Zealand and then in the UK. His book became a foundation stone of philosophical thinking about the nature of the state and the power it can wield, and although his thinking stemmed from his critique of the philosophers of Ancient Greece, the lessons of his time were apparent to all who read the book.

In the book Popper decries the totalitarian tendencies of societies that adhere to the fallacy that progress is allied to historical positivism, pointing out that liberal democracy is the only form of government that allows institutional improvements without violence and bloodshed.

But what if democracy is used to introduce institutional change that is to the detriment of large segments of the population? Contrary to popular belief, a democratically elected government is not automatically concerned with improving the situation of the general public. As we are seeing in Israel now, the government that is in the process of being formed is concerned primarily to forward an agenda that suits a minority of the population which, because of coalitionary pressures, has gained the upper hand in the negotiations for ministerial appointments and their attendant powers.

A democratically elected government can introduce legislation that is racist, discriminatory and immoral, as Hitler did in 1933. The government now being formed by Binyamin Netanyahu panders to the demands of the ultra-right-wing, ultra-religious, misogynistic politicians who represent a minority of Israel’s population but by no means the majority. Some of those politicians have themselves been convicted of illegal actions. And as for Binyamin Netanyahu, his own record has been sullied by accusations of fraud and corruption.

Because I have tried to avoid watching the ubiquitous football on television (World Cup mania) I happened to find myself watching an interview with the latest recruit to Netanyahu’s government, the odious representative of Israeli fascism, Itamar Ben Gvir. Asked about an incident in Hebron where a group of Israelis who had come to show solidarity with Palestinians were physically attacked by some Israeli soldiers – a situation that makes my flesh crawl – he defended a soldier who felled and punched an Israeli demonstrator. ‘Don’t make excuses for them (the demonstrators),’ Ben Gvir said, ‘They’re not left-wing. They’re anarchists.”

Welcome to George Orwell’s world of Newspeak, where war is peace, and bad is good. Only now we can call it Ben-Gvir-speak, where anyone who holds left-wing views is labeled an anarchist.

The enemies of the open society are fully entrenched among us.