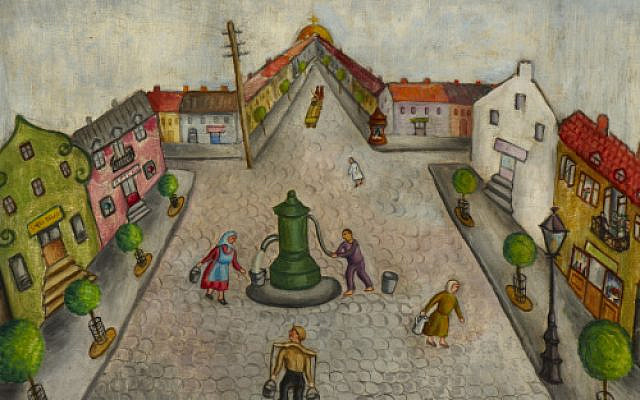 “My little bird, my little Chavaleh, last night I couldn’t fall asleep, so you know what I watched on the TV?

“Fiddler on the Roof” for the seventh time. And I sang all 12 “Fiddler” songs by memory.

So Chavaleh, ‘Wanna know why I watched that movie for the seventh time?'”

“Honey, I know you love “Fiddler.”

I know that “Fiddler” is part of your DNA. Just like it’s in the blood stream of all Jews.”

“Yup, “Fiddler” is my chopped liver schmeared on challah.”

But what I find hard to believe is that you know all the words, to all 12 songs in any musical?  Let alone the words to “Anatevka?”

“Not only do I know the words but I sing them like I sang my haftorah at my bar mitzvah.

With my open hands stretched out, I expounded:

Watch my gestures and my facial expressions;

Pay attention to how I enunciate each word;

Listen to my heart sing for the town I have lost.

Chavaleh, this is how it’s done on Broadway.

This is the way Bock and Harnick wanted sung.

What do we leave? Nothing much.

Where else could Sabbath be so sweet?

Where I know everyone I meet.

Soon I’ll be a stranger in a strange new place,

Searching for an old familiar face

I belong in Anatevka,

Chavaleh jumped out of her seat applauding. Her eyes begged for a bissel more of my shtick.

“You nailed it. I felt your pain. I saw your tears. I thought I was on Broadway. It was like you lost your own home town.”

“Well my little bird, I like Tevya, did lose my home town. And to this day, I miss it. If you got the time, let me tell you a tale about my home town.”

“Of course I got time. With covid creeping on our streets, I got nothing but time.”

“Well as a child, my parents took my sister and me to see Zero Mostel play Tevya on Broadway.

On our drive back to the Catskills, we stopped at the Red Apple. And over a hot pastrami on rye, I had a realization—an epiphany.

My home town, Woodridge, was a replica of Anatevka—a folksy hamlet filled with the ancestors of Eastern European Jewry—a slice of the old country found in the New World—an Old Testament village surrounded by a New Testament nation.

So that night, I created a list of similarities between the towns. And I determined the two towns were amazingly alike.

Yes, my little bird, you may ask, ‘What similarities am I talking about?’

Well here’s an example a line straight out of “Fiddler.” When summer tourists drove through Woodridge, they didn’t even know they had been there.”

Chavaleh’s smile seemed to warm the room like a fireplace in a shtetl home.

“Honey, please go on. I’m so interested. What an original idea. What an epiphany.”

“Well, if you strolled down Main Street studying Woodridgian faces, you saw the village had its fair share of the underfed and overworked.

And while these poor folks shopped, if you paid a bissel of attention, you knew that Yiddish was the town’s second language.”

“Some similarities. Next you’re going to tell me, “On winter nights, both villages were blanketed in white sheets of snow.”

I laughed knowing I needed to supplement my list.

“How about both towns having characters named:

“Now you’re just pulling my leg and making stuff up.”

“Okay you got me. I circumcised a bissel of the truth. But in Woodridge there were many similar names. But this fact is totally true. In both close-knit communities everyone knew everyone else’s name and everyone’s personal business. Both towns were filled with wisdom, wit and lots of gossip. Both towns had their intimate secrets  and their obstinate characters. ”

“Well that I can believe.”

“Good. Now I’ll remind  you of some “Fiddler” wisdom. If gossip were a commodity, the streets of Woodridge would have been paved in gold. These Catskill Mountain country folks said they knew how to keep secrets. But they lied. These gossips only had one rule: Secrets were only to be discussed with anybody that would listen.”

“Well my sweet Broadway-singing man, what a surprise. Next you’ll tell me that both towns had dairy and egg farmers, tailors, doctors, butchers, rabbis and mohels.

Again, I laughed at my love’s sarcastic wit.

Then she asked, “Was Sabbath as sweet in Woodridge as it was in Anatevka?”

I paused to answer and then heard.

“Of course it was!” I bellowed.

“Every Friday night, Woodridge women—wearing head coverings—lit the Shabbat candles. They prayed with all the passion found in a shtetl’s synagogue on Yom Kipper. Covering their eyes with their shaking hands, they thanked Hashem by praying:

‘Blessed are you, Lord our G-d, king of the universe, who has sanctified us with his commandments and commanded us to light the Shabbat candles.'”

“I’m impressed. You managed to memorize a women’s prayer.”

“Chavaleh, here’s another female memory and another similarity. Do you recall the women wearing red, blue and yellow babushkas. They wanted protect their hairdos from the elements. Flowered babushkas so tightly tied below their chins, so that no wind had a chance of messing up their hair.”

“Yes, that I remember. I recall white floral patterns and purple paisley shapes adorning those babushkas.”

“Do you also remember how the locals loved to tell tales?”

“Do you recall the one about a Tevya-like milkman, and his wife and their three daughters living on the Glen Wild Road in the 1920’s?”

“I never knew if there was a kernel of truth to the story because I planted roots in Woodridge’s soil in 1955. By then, I doubted if Tevya was still alive.

But there were still dairies on the Glen Wild Road. So I imagined Tevya continued his trade in the Catskills. But instead of an old nag pulling his milk cart, Tevye drove a beat-up Ford or Chevy truck filled with milk cans.”

“Even if Tevya didn’t live in Woodridge, it’s streets were filled with a long list of Anatevkan losers: Schmucks, schmutzers, schmoozers, shnorrers and schmearers.”

Chavaleh laughed at my alliteration and said, “Sholem Aleichem and Isaac Bashevis Singer would have a heyday writing about these unfortunates. It would have taken them years to capture all the characters on paper.”

“Chavaleh, forget about those characters, think about the tastes and  smells of Woodridge. The Mortman’s freshly baked bialys, bagels and rye bread, Proyect’s ripe plums and apricots, and his fresh flounder and pike and the sawdust that carpeted Kessler’s butcher floor. Aleichem and Singer with their noses and their tongues would have transported right back to the Russian Pale of Settlement.”

“Chavaleh my little bird, our discussion brought me back to my home town.

And I had a realization—an epiphany.

I belong to Woodridge. And Woodridge lives inside of me.

The dear little village of my youth, the little town of my past.”

“Honey, the next time—even if it’s late at night—you want to watch “Fiddler” invite me, we’ll watch it together.”

The painting and painter information—-Thanks Wikipedia:

Chana  Kowalska Winogora was a Polish/Jewish painter and journalist whose artworks reflect her rural origins. Chana Kowalska was the daughter of Judah Leib Kowalski, a Zionist rabbi and politician. She studied painting in Berlin. Later she moved to Paris and became active in Jewish communist organizations, participating in the Jewish cultural event at the 1937 Paris World Exhibition. While in Paris during the German occupation, she was active in Jewish Communist organizations.  She was also active in the French Resistance. Chana was arrested by the Gestapo and deported to Auschwitz in July 1942, where she was murdered by the Nazis.

Her artwork is appreciated as representative of a female artist living in Paris as a Jewish communist during the German occupation. Of particular interest is her painting Shtetl depicting one of the many small Jewish towns in eastern Europe which were destroyed by the Nazis in the 1940s.