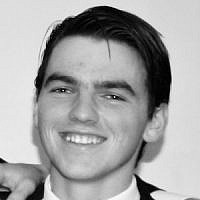 The Blogs
Christopher Eames
Apply for a Blog
Advertisement
Please note that the posts on The Blogs are contributed by third parties. The opinions, facts and any media content in them are presented solely by the authors, and neither The Times of Israel nor its partners assume any responsibility for them. Please contact us in case of abuse. In case of abuse,
Report this post.

It is said that if we forget history, it is doomed to repeat itself.

It goes without saying that the history of this world hasn’t been the most pleasant. Life takes us on many twists and turns, many crossroads that lead individuals and nations to decisions resulting in life and death—oftentimes with a cataclysmic death toll.

I have had the special opportunity to work some in the archaeology field, specifically uncovering this momentous journey of history within Israel. There is nothing quite like archaeology—slowly excavating a patch of dry, “boring” earth, seeing items from the past emerge that paint a picture of how life used to be. And, in a sense, if we do not learn the lessons of the past, they paint a picture of how life will be in the future.

I worked on a couple of excavations on the Ophel, situated between the Temple Mount and the City of David. I was one of several volunteers from Herbert W. Armstrong College (based in Oklahoma), working in joint participation with the Hebrew University’s Dr. Eilat Mazar and her team. During our 2013 excavations, an incredible 7th century AD gold hoard was found, including a large medallion bearing the Israeli symbols of the menorah, Torah scroll, and shofar. It was the find of a lifetime—and a tribute to the inherent historical connection the Israeli people really do have with their land of Israel—no matter the comments from armchair critics who would see the land of Israel taken away from them.

Between 2005 and 2008, our college joined Dr. Mazar in completing digs further south, within the City of David. These excavations revealed a couple of very interesting finds: two bullae (clay document-pieces stamped by the seals of prominent officials). One of these bullae reads: Le Gedaliyahu ben Paschur (Anglicized: to Gedaliah, son of Pashur). The other, Le Yehuchal ben Shelemiyahu ben Shavi (to Jehucal, son of Shelemiah, son of Shavi). These bullae are unique in that they both precisely reference personalities found in the very same verse of the Bible.

It would make sense that these two personalities, mentioned together in the Bible, would also be found together in the same physical location! The verse is Jeremiah 38:1: “Then Shephatiah the son of Mattan, and Gedaliah the son of Pashur, and Jucal the son of Shelemiah, and Pashur the son of Malchiah, heard the words that Jeremiah had spoken unto all the people, saying …” An amazing connection between two tiny, ancient, one-centimeter-in-diameter bullae, and a verse of the Bible! Jeremiah 37:3 also references one of these personalities: “And Zedekiah the king sent Jehucal the son of Shelemiah …” These bullae are currently on special loaned display at our campus auditorium in Oklahoma (see them here).

Reading the biblical account we find that the two personalities, Gedaliah and Jehucal (sometimes spelled Jucal), were two princes who were fierce opponents of the prophet Jeremiah. At that time, the kingdom of Judah was under siege from Babylon. King Zedekiah was ruler at the time, and failed to heed the warnings of the prophet Jeremiah. These two officials, Gedaliah and Jehucal, contributed to throwing Jeremiah into prison. Judah was finally overthrown, and the rest, as they say, is history.

Or is it? As I stated at the top of the article, history not remembered is history doomed to repetition. Perhaps we can look at this history in a different light. President Obama has received enough congressional support for the Iran nuclear deal to pass through without a hitch. The way is being cleared for Iran’s nuclear program to keep steaming along, now essentially with the official support from the international community.

The deal seems to be passing through without meaningful contest. This is despite the countless warnings from officials, despite countless pleas from PM Netanyahu to reject a “bad deal.” This, despite Iran’s Supreme Leader Ayatollah Khamenei recently saying that Israel will cease to exist within the next 25 years, and calling publicly (during the agreement process) for death to America.  This, as Iran continues to work on an intense intercontinental ballistic missile program. This country, that has been regarded as the world’s number-one sponsor of terrorism (and is still listed by the State Department as a terrorist sponsoring state). Who even thinks about writing a $150 billion check to a state sponsor of terrorism? Apparently America does.

The warnings have all been made, just as they were in Jeremiah’s day. Yet the West seems to ignore them, and feels it appropriate to entrust the Islamic State of Iran with nuclear technology. Gedaliah and Jehucal attempted to remove Jeremiah from the scene through his imprisonment. I’m sure the nuclear deal makers would also like for those warning about a “bad deal” to just fade quietly into the background—those who simply love their country enough to speak out when they see blatant threats to their people’s existence.

In the 6th century BC, the land of Israel was on the precipice. The prophet Jeremiah was scorned, abused, imprisoned—we have recently uncovered this additional material proof of that. And Israel, indeed, got swallowed up and plundered by the Babylonian Empire. Those two preserved bullae are a testament to that history. Today, once again, the nation of Israel finds itself on the precipice, a hostile nation bearing down on her, repeatedly calling for her destruction; a hostile nation that could very well end up with nuclear weapons in a short amount of time, and with the ideology to use them. Yet life just seems to keep going on. The news on the nuclear deal is starting to fade into the background. The warnings have again been made, and largely ignored.

Nearly 2,600 years on from Jeremiah, Gedaliah, and Jehucal: what will be the consequences this time around? What will those in the future, who study our past, remember our decisions by?

About the Author
Christopher Eames is a New Zealander, educated in the USA, working in England, who has an enormous passion for Israel. Some of his best life experiences have been excavating and traveling around Israel with his friends. He has always had a passion for things buried in the dirt - and no dirt is more interesting than Israel's!
Related Topics
Related Posts
Christopher Eames
Comments