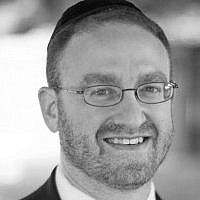 The Blogs
Ken Brodkin
Apply for a Blog
Advertisement
Please note that the posts on The Blogs are contributed by third parties. The opinions, facts and any media content in them are presented solely by the authors, and neither The Times of Israel nor its partners assume any responsibility for them. Please contact us in case of abuse. In case of abuse,
Report this post.

This summer, while travelling on the east coast, I received an excited message from our shul treasurer: the congregation was the proud owner of a long-lost Israel bond!

Cleaning out an old desk drawer after many years, a former member of the synagogue board made a discovery. Under of pile of his personal papers, lay an Israel Bond from 1981 that belonged to our shul. He returned the note to the synagogue, and we learned that the bond was still redeemable.

It is one thing to “have” resources. It is quite another to know they exist and to access them. Without knowledge of our own resources, the greatest of assets are useless. But how do we discover our hidden treasures?

When Hagar was stranded in the wilderness, she realized her flask was empty, the water consumed. Unwilling to witness the death of Yishmael, she distanced herself from her son as she raised her voice and wept. But instead of losing her child, Hagar heard the voice of a Malach (angel). The Malach informed her that G-d was listening to Yishmael’s cry.

Rise up and lift up the boy and hold your hand upon him, for I will make him into a great nation. (Genesis 21, 18)

This is a great promise, but how will the boy survive this precarious moment? Where will Hagar find the water source to save his life? The answer lies in the next verse:

The Torah says that “G-d opened her eyes.” Did she lack sight prior to this moment? Did the well exist all along? According to the Seforno, Hagar was not blind, and the well had always been there. Nevertheless, she did not see the well until HaShem “placed the knowledge within her to recognize the place of water that was there.”

As G-d opened her eyes, Hagar was given the knowledge to finally behold the water source. Without divinely given knowledge, Hagar was unaware of the very resources in her midst. Only in her moment of intense need and prayer was knowledge finally bestowed upon her.

Our world is filled with boundless resources. G-d “sends the springs into the streams, they flow between the mountains. They…quench the wild creatures’ thirst.” (Tehillim 104).

Yet, even in a blessed world, accessing resources can be elusive… Sometimes it takes a moment of painful thirst to realize how much we need that flowing stream. When you arrive to that time of longing, call out from your place of desolation. Pray that G-d will open your eyes.

Behold the wellspring that was flowing all along.

About the Author
Rabbi Ken Brodkin is the rabbi of Congregation Kesser Israel, in Portland, Oregon, where he lives with his wife and children.
Related Topics
Related Posts
Comments