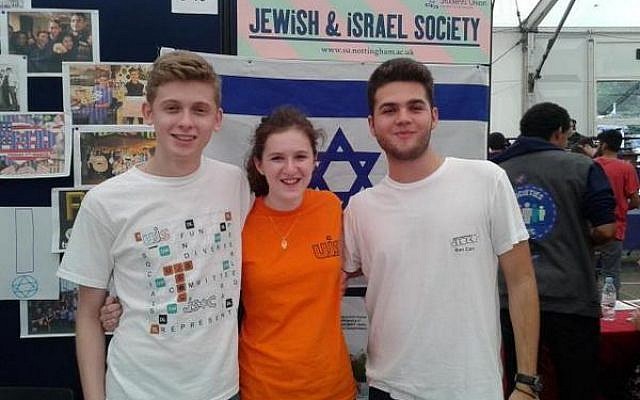 UK's Union of Jewish Students president Ella Rose (center) at Nottingham. 'On Israel, we are unified but not uniform,' she says. (courtesy UJS)

Not many people are still talking about the Pew Report on American Jewry from 2013, but there was one response to one of the questions in that study that still, five years later, really irks me.

It was the one where those questioned were asked to rate a number of items as either: essential to what being Jewish means to them, important but not essential or not important at all.

The list included: remembering the Holocaust, leading an ethical and moral life, having a good sense of humor, observing Jewish law, working for justice and equality in society, being intellectually curious, eating traditional Jewish foods, caring about Israel, and being part of a Jewish community.

Which one scored the highest as being essential to the greatest percentage of these American Jewish respondents?

Let that sink in for a second.

To this cross section of American Jewry, remembering (a non-action) the Holocaust (the greatest mass killing of our people ever) is more essential to what being Jewish means to them than: being part of a Jewish community, caring about Israel or even eating challah and matzah balls on Shabbat.

Now, yes, one can spin this in a positive way and make the argument that what it essentially means is that Jews find meaning and inspiration in the fact that their nation has survived and persevered through so many hardships, up to and including the Holocaust. And that makes them proud to be Jews and motivates them to continue the tradition.

But if that was true, then being part of Jewish community, observing Jewish law or even eating traditional Jewish foods would have been the next items on the list as being most essential to their Jewish identity. Actions that express a commitment and a desire to keep the Jewish tradition moving forward through the generations.

In fact these specific Jewish actions, as opposed to other universal items on the list like living a moral life or being intellectually curious, appear only at the very bottom of the list. Even having a good sense of humor outscored them all as being more essential to what it means to be Jewish.

Now my intention here is not actually to talk about the role of the Holocaust in Jewish identity today.

I raise this point only because I have a fear.

I have a fear that in another short span of time, a future group of Jews, perhaps the Jewish youth of today, will be asked by a future Pew Report and, upon being asked what is most essential to their Jewish identity, they will answer:

And learning all about the…

(Think about that for a moment.)

Let me explain where this fear of mine comes from.

We are living in a generation that is following Holocaust obsession with a growing obsession about the conflict Israel has been entangled in with the Palestinians and her neighbors for close to a century. A conflict which has seen the face of Israel’s enemies change from official countries to terrorist organizations to “peace and justice” movements, and whose goals have morphed from preventing a Jewish state (pre-1948) to destroying the Jewish state (post-1948) to delegitimizing the Jewish state (today).

The growing anti-Israel movement of this generation is causing panic amongst many, specifically American, Jewish institutions, and in their desire to prepare their children and their students for what they will likely encounter, or already are encountering, on college campuses, they are investing more and more time and money in teaching about “The Conflict”.

But the conflict is so complex and so complicated and has been going on for so long that it has accumulated an awesome number of parts and pieces that need to be understood in order to sufficiently and intelligently speak about it. Which requires hours upon hours of classes and speakers and workshops, in addition to lots of personal reading, in order to train students to be Israel’s defenders against apartheid-accusing, BDS-promoting, shout-you-down-if-you-like-Israel activists wherever they shall be found.

Of course, the desire to teach students how to speak out and against the demonization and delegitimization of Israel with intelligence and confidence is completely understandable, justified, and proper. Israel is being attacked and must be defended in the public sphere.

In our desire to defend our people’s homeland and country against those who seek to weaken it and even destroy it, I believe we must ask ourselves a couple of questions:

Are we spending too much time talking about the conflict?

Are we investing an inappropriate amount of time, money and resources into training our students to be defenders of Israel at the cost of other things that are equally, if not more, important?

We want our children and students to thoroughly understand the intricate details about the impact of the years 1948 and 1967, about settlements and the Green Line, but wanting them to understand the finer details of living a strong and committed Jewish life is often viewed as crossing a line.

We want them to know about areas A, B and C and what BDS and JVP and SJP stand for, but are not investing sufficient time and effort into making sure they can read or speak Hebrew.

It seems that a new norm is forming where knowing about the conflict in all of its exciting details is enough to feel Jewish, as if we’re guided by a new version of an ancient philosophy: “I think (about the conflict), therefore I am (Jewish).”

As if God Almighty proclaimed from the top of Mt. Sinai, “And let there be…the Palestinian-Israeli conflict!”

I heard from a friend of mine who, like me, works in the field of Jewish and Israel education, that one of his students from America, in summing up his time in Israel, said, “Jewishly, this program has had a great impact on me. I now know much more about the conflict than I ever did before and that feels good.”

He is linking his Jewish identity with facts and figures about the Palestinian-Israeli conflict?? His Jewish soul “feels good” because he now knows more about U.N. Resolution 242, the 2nd Intifada, and the pros and cons of the two-state solution??

How did we get to this place??

Just like all of the museums and memorials and courses and curriculums dedicated to the Holocaust did not produce new generations of strongly connected Jews, nor did they stem assimilation and intermarriage, so too all the workshops, websites and pamphlets on Israel advocacy won’t increase Jewish connection or pride in this and subsequent generations.

It will just create more Jews who understand more things about the conflict.

And, of course, this obsession about the conflict is also coming from the other side of the political spectrum in the American Jewish community. Those who are highly critical of many of Israel’s actions involving the Palestinians want the conflict to be spoken about wherever a Magen David or mezuzah is to be found. On Birthright trips and in Hillel houses, at Jewish summer camps and at synagogue events. In their eyes, if the leadership and staff of these institutions don’t talk about the “situation” full on and from all sides then they are hiding and lying and doing a great disservice and injustice to their participants, students, campers and congregants. As if wherever and whenever Judaism or Israel is mentioned, settlements and the two-state solution must be discussed openly as well.

The recent “Birthright walkout” can become a dangerous precedent of demanding that programs of a non-political nature in the world of Jewish and Israeli education spend more time talking about the conflict, taking precious time away from what they really want to do– help create strong bonds between Jews and Judaism and Jews and Israel.

Being Jewish today cannot become centered around knowing about the Palestinian-Israeli conflict. It is a conflict, not an inherent part of our national character. It is but a chapter, albeit an important and serious one, in the unique and inspiring story of the Jewish people returning home to their native land. But it’s not the only chapter and certainly not the most important one (unless we allow it to be).

If we obsess with making sure that our children have the right tools to be able to defend Israel, we might realize too late that, along the way, we didn’t invest enough time and resources in fostering the pride one could and should feel in being part of the Jewish people and the beauty and meaning of the Jewish tradition.

Don’t get me wrong. I have the greatest respect for the Israel advocacy and education organizations of our day and the work they are doing combating anti-Israel movements. Their work is necessary to insure that Jews who know little or nothing, or just not enough, about the complex web of politics and realities that shape the conflict is educated and able to stand up and defend Israel against distorted and biased accusations.

But, again, we can’t let it take center stage.

We can’t allow it to become the main thing that brings meaning to one’s Jewish identity.

At least not if we want to see a strong and vibrant future for the next Jewish generation.

And not if we don’t want to see a future Pew Report on American Jewry tell us that yet another generation of Jews finds Jewish ritual, Jewish community and the Jewish state less essential to their Jewish identity than something essentially not Jewish and certainly undesirable: the Palestinian-Israeli conflict.