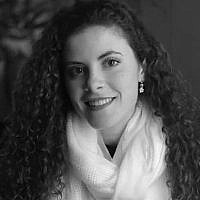 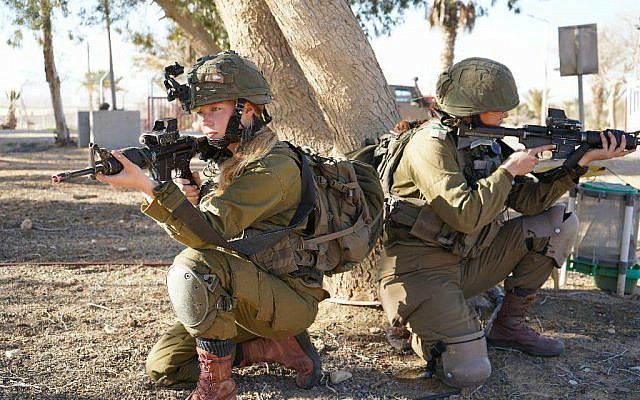 Illustrative: Female soldiers during training, in an undated photography published by the military on June 7, 2022. (Israel Defense Forces)

At the end of my eight-month training as a combat soldier in the Combat Field Intelligence Unit, I, along with 30 or so women with whom I completed training, debated on a commemorative t-shirt to represent successfully reaching our finishing ceremony. After some back and forth, we decided on a maroon colored t-shirt with our platoon emblem and draft year printed modestly over the breast, and the quote from Mulan — “And I’ll make a man out of you!” — stamped across the back.

At the time, it felt like the perfect choice. We — like Mulan who disguises her femininity in order to bravely infiltrate the all-male Chinese army — chose to accept traditionally male-roles as our military service, accepting too, a much more difficult experience. We — like Mulan who trains and fights alongside the men and overturns gendered expectations of women to fulfill domestic duties — made up a small percentage of female fighters who endured the same physically, mentally, emotionally, and technically taxing training as our male counterparts in the squadron. Even though the Israeli Defense Forces, like the American Army, underwent reform in recent years in efforts geared towards gender inclusivity and equality, women constitute approximately 5.7 percent of combat soldiers, which is a tiny fraction of the force.

A few years later, this shirt sits tucked away in my drawer. But now, the Mulan lyrics are no longer a symbol of triumph emblazoned across the back. Instead they hum an ironic tune about the enormous gaps in true gender equality that not only the IDF but other gender-inclusive militaries have yet to fill. When I think back to my experience during those months of training and deployment on three or more missions a week on the Jordanian and Egyptian borders, I recall the strongest group of women I’ve ever known. We faced the same grueling conditions and challenges that the men did, but not a single one of us transformed into a man as a result of our training. Nobody made “men” out of us.

Weeks of shooting practice in the desert, crawling and running drills through the mud and the dirt, nights and days out in the field learning to camouflage, collect information, defend ourselves, force ourselves to stay awake for 48 hours engaging in exhausting tasks, or drills learning to carry injured friends on our backs to safety (as just some of what filled those months) did not turn even one of us into men. The mentality that was drilled into us, and which contributed to the printing of this t-shirt, was that if we, as women, were accepting to take on this role, we needed to be able to prove that we could handle every single thing that a man in our position could. If not, why should a woman be there, struggling in her physical, mental, and emotional inferiority, when a man could easily take her place?

Socialized within us was an internalized “manliness” that we had to uphold, consciously or not. It also dictated the way we were treated, the way we were viewed and pushed ourselves, and ultimately, it served as an excuse to ignore the very real experience of a woman as a combat soldier in the army as a fundamentally different one than that of a man.

You see, expanding gender inclusivity does not mean that women should be treated exactly like men. This is not what women are asking for, because this denies the radically different developmental and long term emotional, physical, and mental implications of military service on women, and it perpetuates a patriarchal hold over what dictates strength, ability, and military success. More broadly, this has implications for what dictates success in any traditionally-male role where women are taking on the same duties.

Yes, gender expansion in the IDF and other armies is progressive, but it skillfully camouflages itself to look like equality even though it is really just handing a woman a man’s uniform and telling her to put it on without any adaptations to the needs of her different physique; if she wants to wear it, she better just put it on and ignore her needs. The uniform is both real and metaphorical.

The women I completed training with did the same things the men did. But, some found themselves having to get abortions over the weekends and immediately returning to night-long running drills and 12-kilometer gear-heavy hikes a few days later. The men never did.

The women I went through training with did the same things that the men did. But we had to sit cramped in three-foot tall camouflaged huts in the dirt with six other women or through weeks of shooting practice with no showering, all while needing to safely change our menstrual gear. We had to deal with crawling through the dirt and mud carrying half our weight while dealing with bursting ovarian cysts, or UTIs, or painful period pains–all the while with little access to gynecological services. The men did not.

Gender equality and gender inclusivity do not mean that in order for a woman to succeed in a “man’s” role, she must “be made into a man,” the way Mulan’s squadron thinks she ought to. Now that gender equality and inclusivity is at the forefront of so many conversations, it is time to understand that much of the way we see roles is based on a centuries’-old foundation of patriarchal rule, and upholding that is nothing but harmful.

Instead of just allowing women access, true progress means amending and reshaping our approach to such roles to better fit an informed, rational understanding of the complex intersectionality that constitutes the demographics of our social environments and industries. Doing so does not weaken a military or a company.

As we undergo yet another round of elections which may result in a dangerously compromised female representation in the Knesset, we urgently need, now more than ever, to get women on the agenda. We need to recognize the undeniable need for systemic reforms to ensure the sustained health of women in our forces.

The girls and I proved that we could do a “man’s” job, but we didn’t have to become men to do it. We entered as women, were confronted even more forcefully with our womanhood, and we left having made even stronger women out of ourselves.

About the Author
Daniella Coen is originally from Los Angeles, California and she currently resides in New York. She is also an Israeli citizen and lived all around Israel for 6.5 years. She is an undergraduate student at Columbia University and Tel Aviv University where she studies Psychology and Literature. She has lived in 4 countries, served in the IDF, and her hobbies include writing, binging true crime documentaries, yoga, drinking wine with friends, meeting dogs, and hiking in nature (ideally doing both of the latter simultaneously).
Related Topics
Related Posts
Daniella Coen