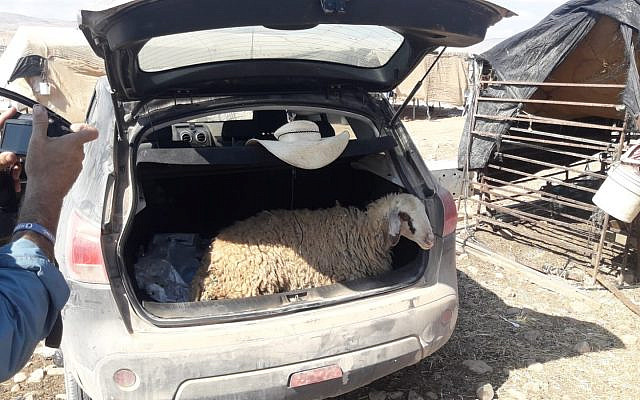 Run Over Sheep In My Car (Courtesy)

And the sheep was silent. Not even a tiny bleat. Apparently it is not the way of sheep to complain too much. But it hurt me just to think about the pain she must be feeling after a settler on an all-terrain vehicle scattered the flock at Ein Sukot (Jordan Valley) on Wednesday, ran over her, and fatally injured her. She couldn’t drink or eat. She couldn’t stand or walk. If, as I understood, her spine was injured, or even if it was “only” a major blow to her internal organs, it must have also been very painful when Ahmed lifted her into my car, we took her out at home, put her in the car again to take her to where we would meet the veterinarian, and brought her home again. Ahmed frantically called several times in order to know when the veterinarian would arrive, but predicted that he would not be able to do anything. He was correct.  The veterinarian looked at her for a few seconds and said, “Slaughter her and eat her. There is nothing that can be done for her.” The sheep continued to calmly look at us and at the world. I thought that I would see some pain or sadness in her eyes, but I didn’t see anything. Perhaps she had achieved the inner calm that comes before death.

Ahmed actually said that they don’t have problems with all of the settlers from Shadmot Mehola. Soldiers and settlers do come to tell them where they can’t go. This particular settler comes once a week to threaten and expel.

Ahmed showed me his broken phone. He says that,  as he was fiddling with it to take a picture, the settler with his big kippah came up from behind, grabbed the phone, and smashed it to the ground. The settler continued to scatter the rest of the frightened sheep for twenty minutes or so, escaping when he saw the police arriving. The officer couldn’t figure how to access the fields, and drove away.

In this week’s Torah portion we read of the creation of the entire universe, including the animals. Human beings are to rule over the animals (Genesis 1:26), but also to protect and take care of the earth and its creatures, or at least the Garden of Eden.  (Genesis 2:15). The midrash teaches that God created and destroyed many worlds before this one. (Bereshit Rabbah 3:7). After God created this world, God was pleased. God showed Adam (and perhaps Eve) what God had created and said, “Look at My works, how beautiful and praiseworthy they are! And all that I have created, it was for you that I created it. Pay attention that you do not corrupt and destroy My world: if you corrupt it, there is no one to repair it after you…” (Kohelet Rabbah 7:13)

But, apparently this settler didn’t think he was required to protect this sheep. In his eyes, it wasn’t part of what we are commanded not to destroy. It was not a corruption of this world to cause suffering to a lowly sheep, or injustice to her owner.

Many commentators say that a “behema” is for human needs, while “khiyot ha’sadeh” are freer.  A sheep, after all, is just a behema. True, the laws of kashrut demand that even a behema we intend to eat deserves to be slaughtered with minimal pain. True we are taught to feed our behemot and care for them before we eat ourselves. According to the midrash, humans did not eat the flesh of animals until the time of Noah. (One of the reasons I am a vegetarian.) But, what is the life or the pain and misery of one simple sheep owned by a non-Jew for one who believes he is obligated to “redeem” the Land of Israel and the waters of Ein Sukot from non-Jews?  After all, does not Rashi teach that the entire purpose of beginning the Torah with the story of creation is to establish the right of God to give the Land of Israel to the Jewish people? True, Ramban disagrees. He argues that the Torah starts with creation because it is the basis of faith.  I would add that we are to learn that God has implanted what is right and what is wrong into the very fabric of the universe.  In the world as I understand it, a sheep counts. Intentionally running over a sheep is not right according to the laws God embedded in the universe. But, this settler has his truth. It seems to me that, in his world, the sheep and her non-Jewish owner are inconvenient interferences delaying God’s destiny for the Jewish people.

I don’t know what the fatally injured sheep understood from all of this. Without Divine intervention, she was already in the process of exiting this world. Dying, what did she care about settlers and the Land of Israel and Jewish privilege, or even the struggle of her shepherd to survive? She couldn’t drink or eat, and was suffering from what had to be unimaginable pain. She could only take a last look at the world and remain silent, as is the way of sheep.

But, what about us? Is it our way to turn our heads and remain silent??