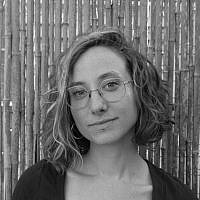 The Blogs
Maya Eshel
Apply for a Blog
Advertisement
Please note that the posts on The Blogs are contributed by third parties. The opinions, facts and any media content in them are presented solely by the authors, and neither The Times of Israel nor its partners assume any responsibility for them. Please contact us in case of abuse. In case of abuse,
Report this post.

“Oh my god! Look at those kids!” my friend said to me, as we passed a group of young boys being detained by IDF soldiers on the side of Route 60, a major West Bank highway, in the South Hebron Hills. As we approached the group, we saw six young Palestinian boys bent down on their knees, shivering in the cold, as three IDF soldiers stood over them, their M16s at the ready.

The moment I saw the scene I asked my friend to pull over. After a few months of working on the ground documenting settler and military violence against Palestinians living in Masafer Yatta, I knew both that my very presence, as well as my privilege, may force the soldiers to refrain from escalating their abusive treatment towards the kids. But apart from that, I knew that documenting their actions was important in order to expose the day to day reality of the occupation and how it affects Palestinian children in particular.

The older children – the oldest of whom was 18 – tried to keep calm in front of the soldiers while comforting their younger friends, while the youngest, aged only eight, cried and begged us for help. They told me they were from a neighborhood nearby and were walking down the street when the soldiers stopped them, accused them of throwing stones, forcing them at gunpoint to kneel by the side of the highway and wait in the cold until a higher-ranking officer arrived. Meanwhile, the three soldiers remained apathetic to the boys’ shivering and crying and had each kid pull down their hood in turn to take pictures of their faces – including that of the eight year old – as if they were criminals.

Part of the reason I became active in the anti-occupation movement was due to my own experience as a soldier. I served as a ‘mashakit tash’ in the Etzion Regional Brigade. A base in the Bethlehem region of the West Bank that also has a detention center where Palestinians of all ages are brought to when arrested. During my time there I saw many Palestinian detainees being escorted in and out of the base. I remember one day seeing a small Palestinian child there, probably not more than about ten years old, handcuffed and blindfolded. It dawned on me that in a parallel universe, I could have been his babysitter – yet here he was on my base, not being treated as a child, but as a suspect. I think it was the first time I really saw a Palestinian child, and in that moment I saw myself too. I saw the occupation from up close, what it meant in practice, and how different it was from the narrative I’d grown up with.

Back to the South Hebron Hills. On the day of the arrests, a few activists on the ground pitched the story to several Israeli news outlets and were rejected by all of them. The laconic response given by the IDF Spokesperson’s Unit described the children as “suspects,” accusing them of throwing rocks; for the Israeli media, that was enough to make this story not newsworthy. Just like that, these were no longer children but terror suspects. The lack of any evidence whatsoever for the IDF’s claim made no difference. The children were yet to face the worst of their ordeal – enduring the detention center to which they would be taken, and the interrogation of Israeli military and security officials. But from the point of view of Israel’s mainstream media, there was no need for due diligence. The word ‘suspects’ was enough to keep this story out of the Israeli public’s sight and attention.

But I suspect that the media’s decision to ignore the incident wasn’t only about the IDF’s designation of the children. The truth is that Palestinians – including children – are arrested so frequently, that this simply didn’t make the cut. It was a non-story from the get go. 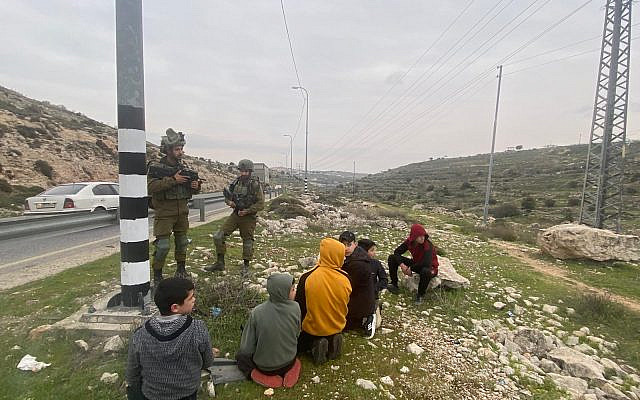 A group of young boys (8-18 years old) being detained by IDF soldiers on the side of Route 60 in the West Bank.

According to statistics collected by the Palestinian NGO Defense for Children International – Palestine, every year there are between 500 and 700 Palestinian minors arrested and detained by the Israeli military. A year ago, after footage of five children aged eight to 12 being arrested for allegedly picking Akub (a wild herb) too close for the settlers’ comfort in the South Hebron Hills went viral, Israel was widely criticized. But none of this seems to have penetrated beyond the surface of Israel’s mainstream media, which continues to push a very specific narrative, framing everything through the Israeli security lens, and thus casting anything which could potentially challenge the status quo, as well as the worldview it supports, as ‘suspect’ or terror-related and thus a threat. Palestinian children in the West Bank live their lives under constant military and police surveillance; their homes are always at risk of being invaded (usually at night); their opportunities are heavily curtailed by Israeli restrictions on movement; and the threat of settler violence – the perpetrators of which almost always enjoy impunity – is ever present.

Arresting and detaining children is not only a direct violation of their rights; it is also a dehumanizing process that can have severe physical and mental repercussions for the children and their families. Following their release from detention, many children suffer from post-traumatic stress disorder (PTSD) as a direct result of the violence and humiliation they experience while in custody, according to Doctors Of The World. The ensuing feelings of insecurity often lead to children dropping out of school and can place their relationships with family members and friends in jeopardy.

This is the reality which Israeli news outlets insist on ignoring, keeping themselves and their audiences safe in the bubble of deceit they’ve created in order to remain indifferent to the abuse of Palestinian children.

Although we are raising generations of Israelis who either see no wrong or do not speak up against violence and oppression, I still want to believe that the Israeli people are better than this. I wish it didn’t have to take violence to force people to wake up, but the documentation of this ugly event should have quickly spread within mainstream media outlets. On a personal level, I wanted to know whether we Israelis are capable of seeing injustice for what it is; or are we so lost in our own narrative of victimhood that we are willing to sacrifice the childhoods and futures of thousands of children. But this information was withheld from the Israeli public, so yet again, most people weren’t even put to that test.

The soldiers who treated those little kids as violent criminals, may not even have thought twice about their actions once they got home; but those children will be forever scarred by the experience, and the Israeli public will not blink an eye.

About the Author
Maya Eshel is an American-Israel activist currently engaged in daily solidarity work in the South Hebron Hills. She is based in Tel Aviv.
Related Topics
Related Posts
Comments