The Blogs
Mordechai Soskil
Apply for a Blog
Advertisement
Please note that the posts on The Blogs are contributed by third parties. The opinions, facts and any media content in them are presented solely by the authors, and neither The Times of Israel nor its partners assume any responsibility for them. Please contact us in case of abuse. In case of abuse,
Report this post. 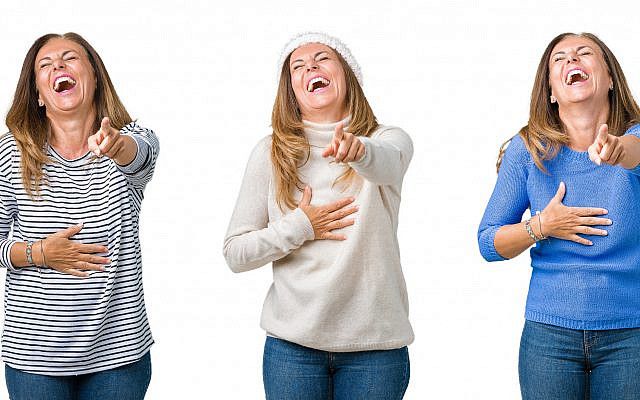 As soon as Simchas Torah was over, my wife said, “I have tomorrow off and that means I don’t have to do anything tonight and I’m not going to. I’m exhausted. I’m taking tonight off. I’m not doing anything and you can’t make me.”

To which I responded, “Actually, I can make you. I started the parsha already and it says here, ‘And he will rule over you,’ so I can.”

Which of course raises the question, what exactly does the Torah’s punishment of Chava (Eve) mean?

You will no doubt remember that Hashem tells Adam not to eat from the Tree of Knowledge of Good and Evil, but then the snake says what he says, and Chava says what she says, and they eat the thing that they eat, and then Hashem is all, “Where are you?” and “Who told you that you were unclothed?” And all of that. And then these verses:

And to the woman [God] said,
“I will greatly expand
Your hard labor — and your pregnancies;
In hardship shall you bear children.
Yet your urge shall be for your husband,
And he shall rule over you.”

Honored rabbis, beloved talmidim, friends, relatives, and total randos on the internet, when I write one of these Torah blogs, it’s usually with some whimsical insight into the foibles of life and the state of the Jewish community, or to fawn over my granddaughters. But not today. Today, I am going to say a chiddush — a novel Torah idea that is original, and, I believe, true. And it’s going to change your thinking about these verses forever, so buckle up buttercup, I’m about to blow your mind.

We all recall that immediately following these verses, the Torah tells us the punishment that befell Adam.

To Adam [Hashem] said, “…Cursed be the ground because of you;
By hard labor shall you eat of it
All the days of your life:

Thorns and thistles shall it sprout for you.
But your food shall be the grasses of the field;

By the sweat of your brow
Shall you get bread to eat,
Until you return to the ground —
For from it you were taken.
For dust you are,
And to dust you shall return.

Hashem punished Adam saying that hard work would be his lot and the field would only yield its produce after much hard work. And this punishment is with us until today. The deer and the walruses don’t have to go to college, the ants and the butterflies don’t need to deal with Microsoft Teams, and all the dolphins have their needs provided for them without any fretting about making their way in the gig economy. But mankind — the pinnacle of creation! — we have to deal with all of that. Because our lot is to have a hard time earning a living.

But when Adam heard that farming would be difficult, did he just accept it? Rashi to Genesis 5:29 says that the Torah is hinting to the creation of the plow or other agricultural tools. So even though the ground was cursed, mankind didn’t just go, “Oh, well.” Humanity has been working hard to find ways to make agriculture and all aspects of sustenance easier since the literal dawn of time.

Let me make this point another way.

The Torah tells us that part of Chava’s punishment was that childbirth would be painful. Even though she was described as “the mother of all living things,” and even though every deer and walrus and dolphin seems to give birth effortlessly, womenkind, the pinnacle of creation, suffers terribly to bring life into the world.

So the Torah is giving us a moral explanation for this bizarre aspect of our reality. But we don’t just accept it. I don’t know about you, but my wife happily had an epidural each time she gave birth. We don’t accept “in hardship will you give birth” as an end. We understand it as a description of reality, but we know that we are empowered, even required, to work to perfect the world and alleviate this suffering.

And that is also true for the words: “he will rule over you.” That is a starting point. It’s a description of a reality of nature if left unperfected. The natural state of the world is that men tend to be larger and stronger. Men tend to be more assertive and aggressive. In that natural state, a woman might not feel equal. But we shouldn’t accept that as the end. We have to recognize that as the challenge. Just as we are empowered to make a better plow, and to alleviate the pain of childbirth, we are empowered to perfect the natural imbalance of power in these relationships.

(I’m skipping the part that the scholars among us will know, that this verse is an allusion to a woman’s more modest and demurring approach to matters of intimacy. But you will understand that what I’m saying in general is particularly appropriate for Rashi’s understanding of the text.)

I don’t want to brag too much, but obviously, my wife’s continued laughing at me is a sign that I’ve perfected this little part of the world already.

About the Author
Rabbi Mordechai Soskil has been teaching Torah for more than 20 years. Currently he is the Director of Judaic Studies at Beth Tfiloh Dahan Community School. He is also the author of a highly regarded book on faith and hashkafa titled "Questions Obnoxious Jewish Teenagers Ask." He and his wife Allison have 6 children that range from Awesome to Fantastic. And now four precious granddaughters.
Related Topics
Related Posts