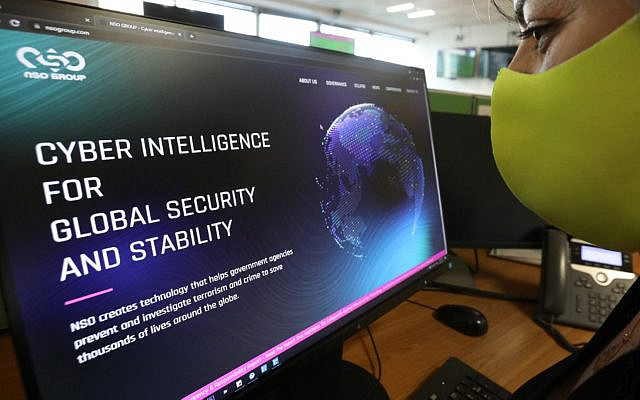 A woman checks the website of Israel-made Pegasus spyware at an office in the Cypriot capital Nicosia on July 21, 2021. (Mario Goldman/AFP)

The revelations that the Israeli police used the NSO Group’s Pegasus program in order to hack into the phones of Benjamin Netanyahu’s close circle and family members has now ensured that NSO-bashing can become that rare cause that is fully embraced by all corners of the political map.

Netanyahu supporters can decry the threat to democracy posed by the use of powerful technological tools to attempt to overthrow a popularly elected prime minister.

At the same time, Netanyahu’s opponents can decry the threat to democracy when these same tools are used to target Netanyahu critics who are exercising their democratic rights to dissent. They can further strengthen their case by pointing to the fact that it was Netanyahu himself, according to reports, who encouraged the sale of this same program to truly dictatorial regimes, who then used it, predictably, to quash dissent, to harass, and possibly murder, reporters, and to monitor and curtail the activities of human rights activists.

But while everyone can have a good time using this story as a convenient bludgeon to criticize their usual political opponents, the inconsistency and hypocrisy of it all is unbearable. After all, Netanyahu’s supporters do not raise their voices to criticize the use of Pegasus against Netanyahu’s detractors, nor its use against innocents in the countless countries whose policies are far more brutal than Israel’s. And Netanyahu’s opponents’ voices are not heard equally condemning violations of privacy that may have led to the retrieval of incriminating evidence against him, nor do they acknowledge the fact that Netanyahu is far from the first prime minister to use Israeli weapons to advance diplomatic ties with murderous dictatorships. That policy has a long and shameful history which includes selling arms to the apartheid regime in South Africa, to military juntas in South America, to the perpetrators of genocide in Rwanda and, more recently, in Myanmar, and to a long, long list of other countries engaged in wanton, intentional violations of human rights. It has been a policy adopted by both left and right wing governments, and it continues to this day.

If, however, we might for a moment transcend our knee-jerk political reflexes and biases, and take a look at the broader picture, we will understand that there is a critical message for all of us that is carried by the series of crises connected to the NSO group that have broken over the past few months. We will also understand that the correct address to lay the blame is not NSO, but the government, and that the one who is ultimately responsible for what has happened is we, the people.

When for years, endless sources pointed to the damage that the Pegasus program was wreaking all over the world against human rights activists, journalists and dissidents, the Israeli public didn’t bat an eyelash. We easily and happily accepted the excuses and explanations provided by NSO, by the Israeli courts and by the government who all defended NSO and the decisions made to allow it to provide its deadly weapons anywhere, regardless of who was likely to be targeted. These explanations, a combination of carefully worded denials and deft avoidance of responsibility, didn’t hold water for a discerning listener who cared. But as long as it wasn’t hurting us, we were content to brag about Israeli technological genius and celebrate the added income. It never occurred to most of us that the process immortalized in Martin Niemoller’s famous poem, “First they came for the Socialists” — “and then they came for me” — would happen to us.

But that is precisely what happened. We were silent when Israeli cyber technology attacked activists all over the world. And in the end, it attacked us too, Netanyahu supporters and Netanyahu opponents, right wing and left wing activists and everything in the middle.

Therefore, with all due respect to the blame that the police and NSO deserve, our basic responsibility as citizens is to respond by first raising a voice opposing the Israeli policy that has allowed Israeli companies to sell weapons, whether they be cyber technology, rockets, drones, or guns, to governments that we know will use them in immoral ways against innocent civilians.

Especially in the wake of recent events, this is a demand that can, and should, transcend political boundaries. Indeed, when it has been raised in the past, it has enjoyed support from members of Knesset spanning from Tamar Zandberg and Mossi Raz of Meretz, to Yehuda Glick of the Likud, and Moshe Feiglin of Zehut. The shock and horror at the way in which Israel used this technology must be translated into a demand not to allow it to be supplied to governments for whom far more horrible uses of these weapons come as no shock at all. We cannot tolerate the hypocrisy of having our indignation stop at the edge of our own borders. We should not continue to be silent as Israeli weapons take innocent lives all over the world. After all, it has already “come for us.” It is far past time, but still not too late, to speak out.

About the Author
Avidan Freedman is one of the founders of Yanshoof (www.yanshoof.org), an organization dedicated to stopping Israeli arms sales to human rights violators, and an educator at the Shalom Hartman Institute's high school and post-high school programs. He lives in Efrat with his wife Devorah and their 5 children.
Related Topics
Related Posts
Comments