Since my retirement (It’s Not an Ugly Word, Ernest, 1/5/18), the two most frequent questions I’ve been asked are (a) are you enjoying it and (b) what are you doing with yourself? While the answer to the first is short and sweet (absolutely!!), the answer to the second is a bit lengthier.

What I’ve done so far during this supposedly initial decompression period includes (and this is only a partial list): joining a gym with my wife (and actually using it), try short ing hard to do my daily 10,000 steps (record to date is 18,988 – if I’d known I was so close I would have made sure to do 12 more), and participating in the men’s weekly physical fitness class at Teaneck’s Rodda Senior Center; taking online courses at the Tikvah Fund with Meir Soloveitchik (“Jewish Ideas and the American Founders” – quite good though I had expected even better) and at the Harvard Extension School (“World War II and Society in the 20thCentury”), attending a number of excellent daytime presentations at Lamdeinu (and I plan to continue to frequent this worthwhile Teaneck program), and continuing to look for a daytime shiur/class that meets my interests (unfortunately, I didn’t meet a certain basic requirement to join Rabbi Adler’s Women’s Humash class); listening to numerous audio books (usually while walking or exercising  and thus getting double my money’s worth, or, if you consider I listen at double speed, quadruple); catching up somewhat on uncompleted NY Times crossword puzzles; and starting to go to morning minyan twice a week in addition to Shabbat and yom tov (I know, I know, it’s no big deal but it’s better than my previous no times a week).

And, oh yes, actively participating in the preparation for my daughter Gabrielle’s wedding to Allen Glenn that took place two weeks ago.

I always thought I had actively participated in the preparation for my daughter Raquel’s wedding almost 14 years ago. I now realize, however, that as a busy practicing lawyer then I didn’t really understand what was encompassed by preparation. Now – after attending every (yes, every!) meeting or visit with every potential (and then actual) caterer, wedding venue, florist, and printer; after driving to Brooklyn more times in the past six months than in the past 16 years; after being the designated driver for many mother-of-the-bride gown shopping trips and all bridal gown and mother-of-the-bride gown fittings in Manhattan and Brooklyn (somebody had to sit waiting in the car since legal spots are so hard to find and parking garages prohibitively expensive in New York City); after visiting more gemachs than I knew existed, covering everything one might need for a wedding from blusher veils (yeah, I never heard of them either) to hair combs to wedding shtick for dancing to Sheva Brachot flowers; after reviewing, and often redrafting, all the various vendor contracts (without, unfortunately, being able to charge my old hourly rate); and after signing numerous checks – now I have a better appreciation for what preparation truly means.

Of course, I also learned about the myriad number of ways things can go wrong: deadlines not being met, alterations requiring re-alterations, finished products not looking the way they were promised or containing (our) typos thus requiring reprinting, mail not being delivered (both invitations and response cards), and one of my two new bow ties ordered specifically for the chuppah arriving the day after the wedding, to name just a few. (In truth, this is exaggerated. Not everything went wrong; indeed, many more things went smoothly and just as we planned.  But it’s human nature, I guess, that the screw-ups seem to be more memorable.)

And yet, thoughts of all the good, the aggravating, and the expensive experiences of preparation evaporated from my mind the moment I clasped Gabrielle’s right hand and my wife Sharon clasped her left and we began walking slowly down the aisle to the Chabad anim zemirot, with smiles on our faces and tears – perhaps only metaphorical but there in some sense nonetheless – in our eyes.

As I stood under the heirloom hand-painted silk chuppah that was personally created by our artist daughter Daniele for Raquel’s wedding and which we hope will continue to be used at family weddings, I felt that although it’s not a Jewish custom, I gave Gabrielle away twice: first, when she dropped my hand and, accompanied by Sharon and her almost-but-not-quite-yet-mother-in-law Marla, circled Allen seven times, and then a second time when, after Allen put the wedding ring on her finger while reciting the traditional Jewish declaration of marriage, she responded with a more modern halachic declaration that she accepted the ring and thereby became married to him kedat Moshe v’Yisrael. That sealed it. While she’ll always be my daughter and in some ways my baby, there’s now another man in her life with a relationship, though different, that equals mine. It’s heartwarming and heartbreaking all at the same time.

There were many other special moments. Prior to the wedding we celebrated at a joint aufruf at a partnership minyan at Darchei Noam where Gabrielle and Allen had back-to-back aliyot and, standing together on the bimah, were showered with candy bags after a joint mi shabeyrach was recited. And one week later our nuclear family again celebrated, this time at a more private Shabbat Kallah in our home, with a few family guests from the Upper West Side, Canada, and Israel.

At the wedding, there also were countless meaningful moments, both private and public: watching my daughter Micole playing her oldest sibling role to perfection and being the necessary calming influence on her younger sister when times became tense; running between the traditional chatan’s tisch and the increasingly popular kallah’s tisch where Gabrielle’s sisters, relatives, and friends chanted Shir HaShirim, joyfully sang, and spoke words of Torah and poetry, and Gabrielle sang a memorable blessing of shehechiyanu; accompanying Allen, with his father Ray, to the badekin; kvelling over our grandchildren Ezra, Aviva, and Liora, the most handsome ring bearer and cutest flower girls ever (just try to convince me otherwise); listening to Allen’s aunt Nancy reciting under the outdoor chuppah (rain threatened but it held off, thank God) a special tefillah found in R’ Amram Gaon’s 9th century siddur that in a lyrical alphabetical acrostic enumerates the reciprocity of love and support between bride and groom.

And: Gabrielle and Allen’s good friend, Rav Ezra Seligson, lovingly officiating at his first wedding; warmly greeting and celebrating with friends, some made in just the last few years and others dating back to first grade (you do the math); exuberant family simcha dancing (Kaplan, Glenn, and Kaplan-Glenn); a surprise song written especially for Gabrielle and Allen and sung to them during the program; the quiet generosity of my first son-in-law Jason who took charge of the exhausting and critically important job of packing everything and everybody needed for the wedding, getting it and them to the shul on time, unpacking and knowing where everything was, and then doing the same thing for the trip home; and, well, and on and on.

Let me end with the moment that personally touched me the deepest. I’ve been an avid Peter Paul & Mary fan since I bought their first record album (yes, record album) when I was a high school junior, and all of their music now lives on my iTunes app.  All of it. And over a period of more than 20 years, I put all four of my daughters to bed by singing PP&M’s tender and emotional paean to the special parent-child relationship, a revised cover of John Denver’s “For Baby (Bobbie).”

“For Baby” was scheduled for my dance with Gabrielle.  But since the band member who knew it wasn’t present, there was no one to play it. Not a problem, though.  I gave my iPhone to the sound technician, and, on an otherwise empty dance floor, Gabrielle and I were able to dance to Mary’s touching rendition of what the Kaplan family calls the Rainbow song, thus allowing me to sing softly in her ear, probably for the last time, these oh so special words.

I’ll walk in the rain by your side/ I’ll cling to the warmth of your tiny hand/ I’ll do anything to help you understand/ I love you more than anybody can.

And the wind will whisper your name to me/ Little birds will sing along in time/ The leaves will bow down as you walk by/ And morning bells will chime.

I’ll be there when you’re feeling down/ To kiss away the tears that you cry/ I’ll share with you all the happiness I’ve found/ A reflection of the love in your eyes.

And I’ll sing you the songs of the rainbow/Whisper all the joy that is mine/ The leaves will bow down as you walk by/ And morning bells will chime. 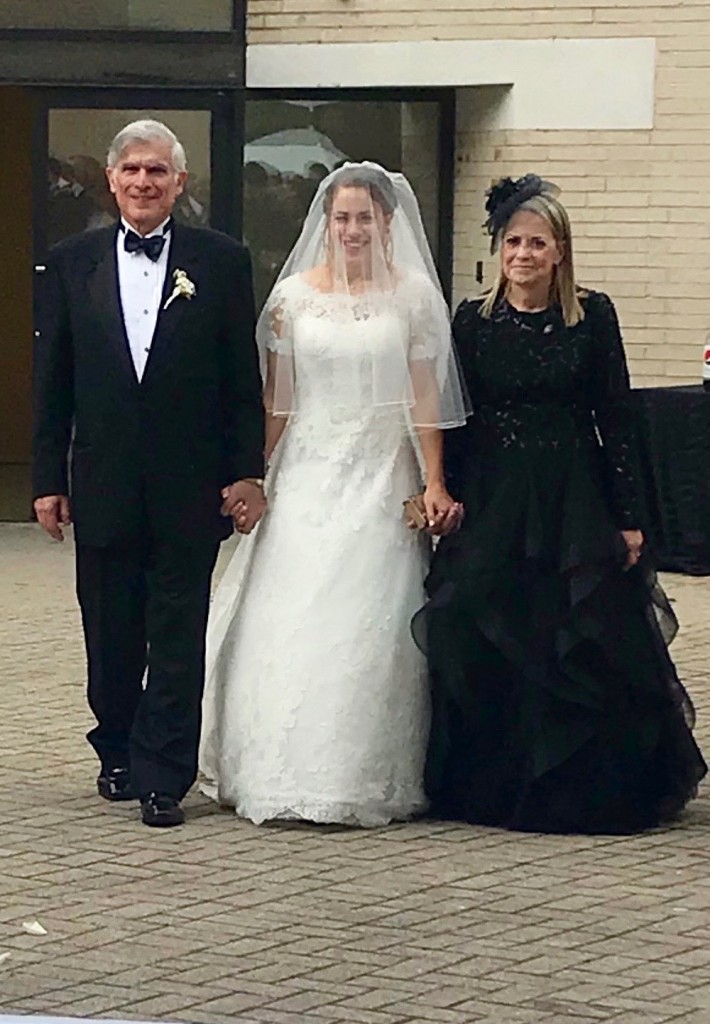 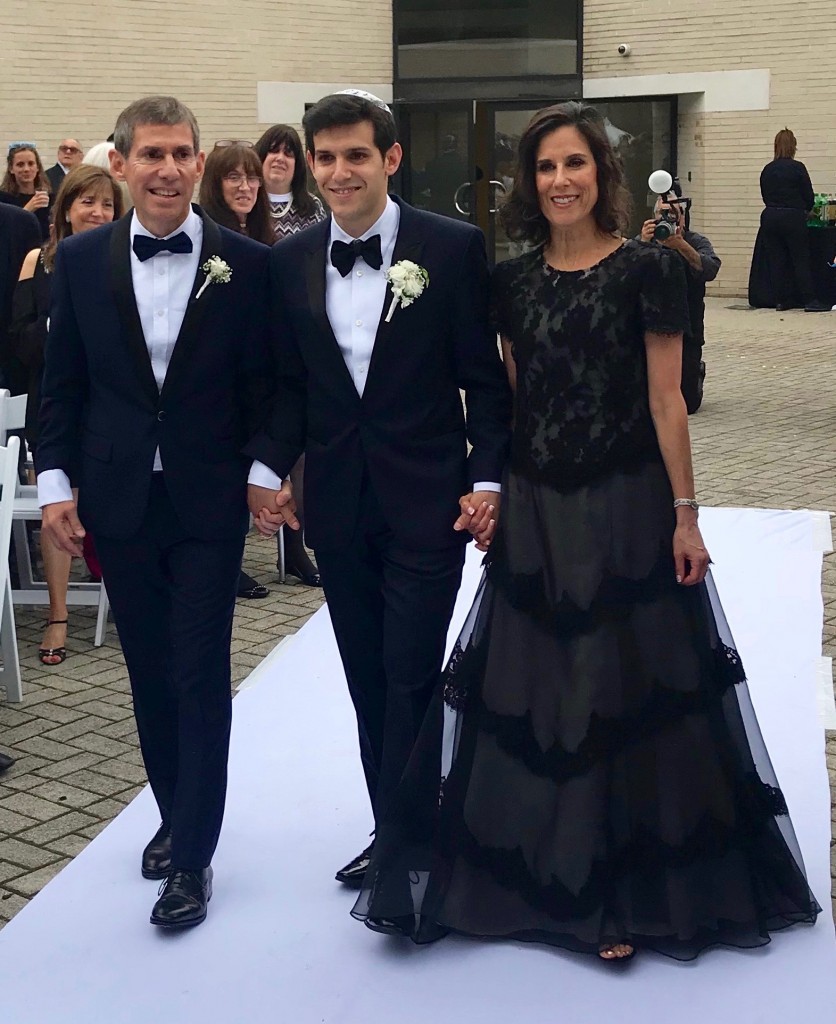