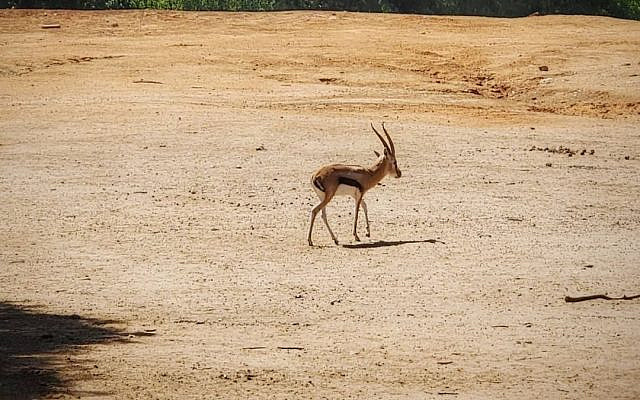 “Horses neigh and donkeys bray.” As every English-speaking child knows, roosters say “cock-a-doodle-do.” Yet, Israeli children will tell you that roosters crow, “koo-koo-ri-koo.” Similarly, while American children might imitate a dog by saying “bow-wow” or “ruff-ruff,” an Israeli child would instead say: “hav-hav.” All of these differences can be chalked up to onomatopoeia, which is the notion that some words are derived from the sounds associated with what those words denote. Because societies sometimes perceive sounds differently, they will sometimes refer to those sounds in different ways. What seems to be true across the board, though, is that in all languages the words for animal sounds seem to be derived from onomatopoeia. In this essay we will explore animal sounds in the Hebrew language and show how they are not synonyms in the same way that the English verbs meow and bark are not synonyms.

In English, we might say that a lion roars or growls, a cow moos, a hart coos, a bird chirps, a horse neighs, a bear snarls, etc… The notion that there are different verbs to denote each animal’s particular sounds is also found in Hebrew. In his epic response to Menachem Ibn Saruk (920-970), the early Hebrew grammarian Donash Ibn Labrat (920-990) was one of the first to notice that Biblical Hebrew uses different verbs to denote the sounds that different animals make. Menachem himself makes this point in Machberes Menachem when discussing the biliteral root GIMMEL-AYIN, but Donash elaborated on the idea further.

Interestingly, Donash also writes in that passage that a gever (“rooster”) is tzorayach. However, this understanding seems to be based on a mistaken reading of Tzephania 1:14 and Isa. 42:13, which use the verb tzorayach to denote the battle cry of a gibbor (“human warrior”), not gever.

In the Bible, the verb noer appears once — in reference to a lion cub’s roar (Jer. 51:38). Yet, in the Talmud (Berachot 3a), the verb noer refers to the sound that a donkey makes. Rabbi Nosson of Rome (1035-1106) in Sefer HaAruch explains away this discrepancy by noting that this verb primarily refers to the young lion’s roar, and it was used by the Talmud to refer to a donkey’s bray only in a borrowed sense.

As an aside though, the word tzanif in Biblical Hebrew means “crown” (Isa. 62:3, Zech. 3:5, Iyov 29:14). Rabbi Samson Raphael Hirsch (to Deut. 25:18) connects the word tzanif, which denotes something round whose ends are connected, to the word zanav (“tail”), which denotes the back-end appendage of an animal. His justification for drawing this comparison is the interchangeability of TZADI and ZAYIN, as well as PEH and BET.

An apocryphal Midrash describes the colorful sounds made by the enchanted animals etched into King Solomon’s throne. That Midrash associates a few more verbs with the sounds produced by various animals. Most of these words do not appear in the Bible: a hart is tzohel, a tiger is tzorayach, a sheep is chonev, a wolf is zorer/zored, a deer is mifaret, a bear is migamgem, a donkey/ibex is mavrim/mavris, an elephant is nohem/tofes, a Re’em is mitzaltzel, and a giraffe is milavlev. This Midrash is cited by the Kabbalistic work Sodi Razi (Hilchos Kisei) ascribed to Rabbi Elazar Rokeach of Worms (1176-1238), as well as by Rabbi Avraham ben Shlomo of Yemen’s commentary to I Kings 10:18. (See also Tosefta D’Targum to I Kings 10:20, and Targum Sheini to Esther 1:2.)

As is his way, Rabbi Shlomo Pappenehim of Breslau (1740-1814) offers etymological insights into some of these words for animal sounds by tracing them to their core biliteral roots. For example, he writes that the word goeh for a cow’s moo is derived from the root GIMMEL-AYIN (“exertion to the point of exhaustion”), which gives us such words as yagea (“tired”), yegiyah (“toiling”), and geviyah (“expiration/death”). This is because, as Rabbi Pappenheim explains, a cow exerts much effort in letting out those moos.

In discussing the verb mitzaftzef (“chirping“), Rabbi Pappenheim explains that the core root is TZADI-PEH, from which words like mitzapeh or zipui (“coating”), tzofeh (“gaze”), and tzipiyah (“anticipation”) are derived. The bird’s chirping expresses its anticipation and hope for the arrival of its mate and/or its food.

Concerning the word novayach (“barking”), Rabbi Pappenheim finds that its root is BET-CHET (“sound that travels through the air”), whose only other derivative is the first word in the term avchat cherev (Yechezkel 21:2), “the swooshing of a sword.”

When it comes to shokek to denote the bear’s roar, the Vilna Gaon (to Prov. 28:15) explains that this word is related to the word shokek in the sense of “desire,” because a bear is always hungry and desires food. Other commentators, like Ibn Janach and the Radak, explain that shokek does not refer to a bear’s roar, but to its sauntering gait as it walks. The way the Radak explains it, shokek is actually related to shok (commonly translated as “thigh,” but is more accurately the “calf”), which moves as one walks.

Advertisement
This beautifully written book provides an in-depth exploration of the Hebrew language, its structure, and its use in prayer and Torah study. Rabbi Klein provides a clear and concise explanation of each topic, making it perfect for beginners and more advanced students alike.

Rabbi Pappenheim argues that shokek is derived from the core meaning of the two-letter root SHIN-KUF, which means “making consecutive sounds.” He explains that when a lion is shokek, it produces consistent sounds one after the other. From this meaning, the word teshukah (“desire”) came about, because when one is in the throes of desire, one’s heartbeat becomes more noticeably consistent and consecutive. A tertiary meaning derived from this root is the word neshikah (“kiss”), which relates to SHIN-KUF either because it is the outward realization of one’s teshukah, or because kissing produces a distinct sound. Rabbi Pappenheim further explains that the word neshek as “weapon” relates to this root because the mechanics of the neshek create a certain type of noise, or because two opposing combatants approaching each other on the battlefield to fight resemble two lovers approaching each other for a kiss.

If you’ve been keeping track, there are four Biblical Hebrew words to denote the sound made by a lion: shoeg, nohem, yehegeh, and noer. Rabbi Yechiel Michel Stern (Rav of the Ezras Torah neighborhood of Jerusalem) suggests that these different words reflect the different reasons why a lion might make noise. For example, the Vilna Gaon (to Prov. 28:15) explains that a lion “roars” (shoeg) when it is hungry. By roaring, the lion tries to show its dominance in order to cause other animals to freeze up in fear and become its prey. Yet, Rashi (to Sanhedrin 102a, Berachot 32a) writes that a lion is nohem when it has a lot of food to eat, such that it becomes especially happy and goes berserk. Rabbi Stern does not explain what causes a lion to be yehegeh or noer.

Rabbi Pappenehim differentiates between these words for a lion’s roar by tracing them to their core roots. He explains that the word shoeg derives from the biliteral root SHIN-GIMMEL, which denotes “inadvertency” (like shogeg). He argues that shoeg specifically refers to the almost-involuntarily sound of letting out an emotional outburst in response to something painful or joyful.

Additionally, Rabbi Pappenheim traces the word yehgeh to the root HEY-GIMMEL, which primarily refers to “diligence” and “consistency,” making its derivative yehgeh refer to a lion’s consistent crying/sobbing.

In explaining the word noer, Rabbi Pappenheim offers a similar explanation. He traces that word to the two-letter root AYIN-REISH, which means “revealing.” Other words that come from this root include ohr (“skin,” i.e. the revealed/visible part of one’s body), ervah (“nakedness,” when a person’s body is revealed), ta’ar (“razor” a blade used for cutting hair and revealing the skin underneath), and ar (an “enemy” who reveals his enmity outwardly). Eir (“awake”) is also derived from this root because when one sleeps, his or her abilities are not readily apparent, but when they awaken, those abilities are suddenly revealed. Building on this last example, Rabbi Pappenheim explains that noer is an audible outburst that a lion suddenly lets out and reveals as being within his repertoire.

Finally, the term nohem, according to Rabbi Pappenheim, derives from the two-letter root HEY-MEM, “storminess” or “chaos.” Other words derived from this root include hamon (“multitudes,” i.e. masses joined together in a stormy or chaotic gathering) and tehomot (“depths of the sea,” where the deep sea waters are wild and stormy). When a lion is nohem, this roar is likewise an outward expression of some sort of inner turmoil and storminess (albeit done more deliberately than when a lion is shoeg).

Rabbi David Chaim Chelouche (1920-2016), the late Chief Rabbi of Netanya, argues that the words nohem and nohek are both derived from the two-letter root NUN-HEY. That root also yields the word nehi (Jer. 9:17-19, 31:14, Amos 5:16, Micha 2:4), which is an onomatopoeic interjection that denotes “sighing.” Rabbi Pappenheim, on the other hand, traces nohek to the monoliteral root KUF, which denotes “expulsion” and from which the biliteral NUN-KUF (“cleaning”) is derived. He consequently explains nohek as audible moaning or sighing intended to “clean/clear” the heart of suffering. 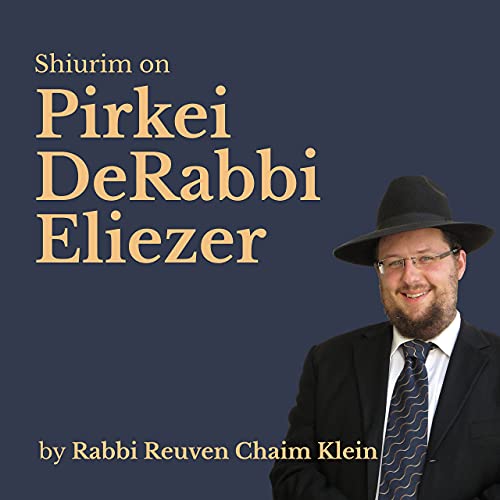 This series of lectures by Rabbi Reuven Chaim Klein provides an in-depth analysis of Pirkei DeRabbi Eliezer, one of the most important and comprehensive works of Jewish law and philosophy. Drawing on a wealth of traditional sources, Rabbi Klein provides a clear and insightful overview of this seminal text.

In summation, Rabbi Yaakov Tzvi Mecklenburg (1785-1865) notes that the very word for “animals” in Hebrew — behemot (singular: behemah) — relates to the different noises that come from them. He explains that the root of the word behemah is HEY-MEM(-HEY), which means “incoherent noise” (like Rabbi Pappenheim’s explanation of that root). Rabbi Aharon Marcus (1843-1916) similarly writes that the word behemah derives from the root BET-HEY-HEY, which is an onomatopoeic representation of a common animal sound (“baaaa”). He links this to the ancient Latin and Old Irish word bo(s) (an etonym of the English bovine, also related to bous in Greek and bol/vol in various Slavic languages). Either way, the behemah differs from the human being — who is sometimes called a middaber (literally, “speaker”) — because humans have the unique ability to produce understandable sounds through what we call speech, while animals just make sounds.