The Blogs
Peter Lerner
Apply for a Blog
Please note that the posts on The Blogs are contributed by third parties. The opinions, facts and any media content in them are presented solely by the authors, and neither The Times of Israel nor its partners assume any responsibility for them. Please contact us in case of abuse. In case of abuse,
Report this post. 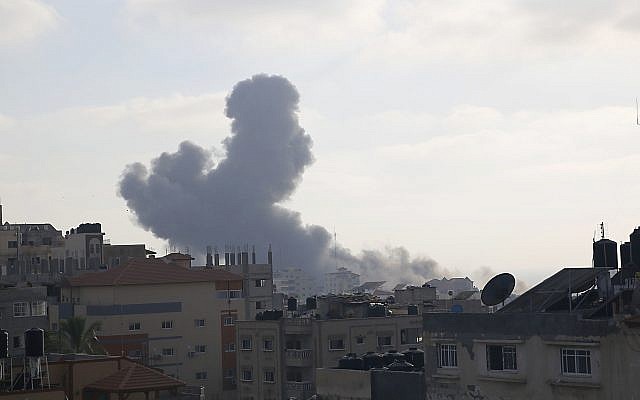 Smoke rises from an explosion caused by an Israeli airstrike in Gaza City, (AP Photo/Hatem Moussa - via Jewish News)

On Tuesday IDF troops on the border with Gaza identified shots, visual intelligence quickly identified the origination of the shots, and the green light was given to strike the lookout tower the snipers were perched in. The two Hamas snipers were killed. In the after action review the IDF admitted that the forces had misidentified the direction of the shots, as the snipers conducted a display for Hamas leadership. Since the end of July, when Hamas snipers shot and killed Staff Sergeant Aviv Levi, and injured Lieutenant Bar Vaknin in two separate incidents, troops on the border have rightly been extremely concerned with the sniper threat.

This misidentification was the opening chord for the latest round of violence with Hamas. Hamas promised retribution and on Wednesday night opened fire, again with snipers, at heavy machinery vehicles on the border, and then began an extensive bombardment of the border communities.

The dynamics of escalation, where nobody, Israel or Hamas, really wants another war, but things happening on the ground inch us there time and time again. With over two hundred rockets and mortars fired at southern Israel reaching as far as Beer Sheba and Israel’s response some one-hundred and eighty Hamas assets targeted, including command and control positions, weapons manufacturing capabilities, hot interceptions of launchers and their terrorist operators.

Carl von Clausewitz the Prussian general and military theorist wrote that “war is the continuation of political intercourse by other means”, and what we saw over the last few days was kinetic negotiations. Where the political intercourse is taking place by Egyptian and UN diplomats to try and secure a preferable security environment for Israel, and an alleviated humanitarian situation for the people of Gaza.

The kinetics emphasized that each side is trying to up the ante just a bit to send a message that “you don’t want to go there”. And indeed, this morning’s daybreak announcement that a cessation of fire has begun shows that the kinetics were effective. The problem with kinetic negotiations is the high probability of mistakes that can put leadership on both sides in a position that they have to up the ante further leading into an uncontrolled spiral of events that become war.

Unfortunately, the fundamentals of the conflict with Hamas in Gaza haven’t changed. The terrorist organization bent on destroying Israel investing millions of pounds in terrorist tools of tunnel warfare, rockets, drone and naval capabilities. All at the expense of the people it rules. The humanitarian conditions in Gaza are terrible, water conditions, energy, employment are all depleted and deteriorating. Hamas, is willing to sacrifice the people it rules as long as it can continue to hold the banner of resistance. The border riots that have taken place since the 30th of March were a strategic decision by Hamas to try and improve their situation, unfortunately it seem they haven’t learnt that Israel is never patient under-fire.

On Israel’s part, there is a deadlock with a government that always speaks with a big stick, and very small carrots. The Israeli citizens of the south have endured an unbearable reality of seventeen years of rocket and mortar fire. Since 2009 we’ve had three wars and endless flare ups of violence. The government understands that another war won’t change much, but as Hamas has seen while Israel is not interested in war, it cannot and should not, refrain from defending itself.

In this reality, Hamas as the ruling authority in Gaza must be addressed. While there is deep apprehension in Israel to engage Hamas, even though that is what’s happening behind the scenes, they must be engaged in the interest of both sides are to prevent another futile war. The reality of a future war could have three possible outcomes. First, Hamas is eradicated at a huge civilian and international cost, leaving a leadership void, that will be filled by more radical elements that Iran would nurture. Second, Hamas would be defeated militarily, but the ideology remains only to regroup and bring us back to square one. Finally, Hamas is defeated militarily, the Palestinian Authority in the West Bank try to come in to take control and a civil war breaks out between the factions again spilling over into Israel.  By acknowledging Hamas’ responsibility, it empowers their accountability. Egypt is key to this, and other international mediators could also help. By ignoring Hamas over the last 11 years, the world has forced them into the cradle of Iran with some 80 million dollars of aid per-year that isn’t being invested in anything positive. For the sake of the Israelis in southern Israel, and the Palestinian living under the brutal rule of Hamas we must treat the Palestinian arena as two separate stages. The PA for the West Bank and the Gaza Strip to Hamas. This is the reality, it just needs to be acknowledged.

The deep mistrust with Hamas, the lack of any real mechanism today that can interject some positivity in the cross-border relationship means that while diplomats are trying to create a long-term solution, it is the short term reality, instability and unpredictability that will bring us again, probably in the not so far future, to the brink of war.