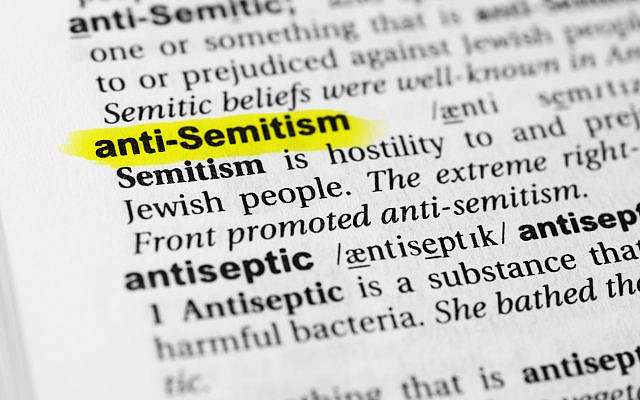 Antisemitism in the dictionary. Via Jewish News

On 10 November 2021 the Office for Students [OfS], which is the statutory regulator of higher-education institutions [HEIs] in England, announced that according to its inquiries no less than 216 OfS-regulated HEIs had “adopted” the definition of antisemitism agreed upon by the International Holocaust Remembrance Alliance some five years previously.

I have elsewhere traced the history of this definition, and pointed to its numerous weaknesses while acknowledging its strengths.[1] I do not intend now to repeat my arguments. I want, rather, to put some context into the OfS announcement.

For some time, and in my view primarily to curry favour with a variety of Anglo-Jewish communal leaderships, the present Conservative government has been pressurising the OfS into foisting the IHRA definition upon English HEIs.

The idea then seems to have been that those HEIs “reluctant to adopt” the IHRA definition would be named and shamed. Indeed on 9 October 2021 Mr Williamson, in an email to all HEIs, had warned bluntly that if by Christmas 2021 “the overwhelming majority of institutions” had not “adopted” the definition, he would “act.” And by “act” he pointed to a range of options, including directing the OfS to impose financial penalties on recalcitrant academies of learning.

Well, Christmas 2021 came and went. Some hitherto insubordinate HEIs did indeed “adopt” the IHRA definition, but in numbers far from approaching “the overwhelming majority” that Mr Williamson had so recklessly bandied about. Worse still, some universities (Oxford University, my almer mater,  is but one example[2]), whilst on paper ‘adopting’ the IHRA definition, made it clear that they would nonetheless give primacy to the provisions of relevant legislation, notably the 2010 Equality Act, the very statute that had been used by the Equality and Human Rights Commission to investigate and excoriate the handling of antisemitic complaints by Mr Williamson’s political opponents in the Labour Party under its previous leader, Jeremy Corbyn.

The tone of the OfS in relation to the IHRA definition soon changed. Or, to be more accurate, the doubts that the OfS had previously entertained about the legality of imposing financial penalties simply to force adoption of the IHRA definition began to crystallise publicly. On 29 July 2020, without admitting that ‘naming and shaming’ were now no longer its top priority,  it had already confessed to HEIs that it was “developing a list of higher education providers who have adopted the IHRA working definition of antisemitism to be published in the autumn.” On 10 September 2020 it had written privately to HEI’s that had not “adopted” the IHRA definition to confirm that this was the case. And exactly two months’ later it published its promised list of IHRA adopters.[3]

On 15 September 2020 the gormless Mr Williamson had been removed from office, and replaced by the urbane horse-rider Mr Nadhim Zahawi.  In his Jewish News article of 11 November 2021 Mr Zahawi waxed lyrical as he dwelt upon those 216 HEIs whose names appeared on the list, pointing out that they included no less than 95 fully-fledged universities.[4] What he omitted to mention was that the total of HEIs registered with the OfS numbers no less than 418. So actually, less than 52 per cent of OfS-registered HEIs have (to borrow Mr Zahawi’s trenchant turn of phrase) “signed up” to the IHRA definition. Hardly the “overwhelming majority” envisioned by his gormless predecessor!

Nor did Mr Zahawi point out (the OfS has, in a private communication with me) that some (admittedly “a very small number”) of HEIs have “adopted” alternative definitions of antisemitism. And I have noted with no little amusement that at least one HEI on the published list – the University of Kent – has, to the extreme vexation of the Campaign against Antisemitism, adopted both the IHRA definition and its rival Jerusalem Declaration.[5]

The 2017 Higher Education & Research Act that established the OfS specifically obliges it (in Section 2) to have regard “to the need to protect the institutional autonomy of English higher education providers”. The OfS was certainly not set up to breach that autonomy at the whim of any secretary of state. Is it too much to hope that this lesson has been learned?

[1]  ‘This Labour Party row will not be settled by relying on a flawed and faulty definition of antisemitism,’ Independent, 31 July 2019: https://www.independent.co.uk/voices/labour-antisemitism-tom-watson-blood-libel-jewish-conspiracy-ihra-a9029081.html

‘The IHRA definition: Good, but only in parts,’ Jewish News, 9 October 2020: https://blogs.timesofisrael.com/the-ihra-definition-good-but-only-in-parts/