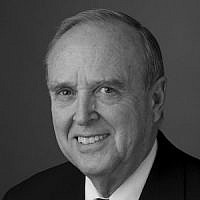 The Blogs
Michael C. Kotzin
Apply for a Blog
Advertisement
Please note that the posts on The Blogs are contributed by third parties. The opinions, facts and any media content in them are presented solely by the authors, and neither The Times of Israel nor its partners assume any responsibility for them. Please contact us in case of abuse. In case of abuse,
Report this post.

The controversy involving Steven Salaita, whose nomination to become a tenured member of the faculty at the University of Illinois at Urbana-Champaign was ultimately rejected by the University’s Board of Trustees on September 11 by a vote of 8-1, has attracted a great deal of attention. At the center of the controversy is language used by Salaita, particularly in tweets posted on his Twitter account which were first widely noticed at the time of the fighting in Gaza during the summer.

Before the vote was taken University of Illinois President Robert Easter said that “Professor Salaita’s approach indicates that he would be incapable of fostering a classroom environment where conflicting opinions could be give equal consideration, regardless of the issue being discussed.” Though the matter of anti-Semitism was not specifically raised in connection with the decision making process, widespread circulation of Salaita’s tweets has led to assertions that his statements often have an anti-Semitic dimension. This in turn has stimulated a vigorous defense of his language from the pro-Salaita camp and strong objections to any claims regarding anti-Semitism.

In my view the arguments of the Salaita defenders cast an unfortunate cloud over the issue of anti-Semitism in his writings and over understanding of the nature of anti-Semitism more broadly, particularly in today’s world. And it is those issues that I wish to explore here.

It should first be noted that the pro-Salaita camp benefits from the way much of the mainstream media has chosen to summarize what Salaita has written, with the coverage usually implying that the target of his invective was only the state of Israel and its “military action in Gaza.” But the objects of his wrath are often also Israel’s supporters, who are regarded with utter contempt and hostility. And the nature of his scornful attacks on Israel also merits more extensive attention.

“Let’s cut to the chase,” Salaita wrote on July 8, the day Israel responded to extensive rocket attacks on its civilian population by beginning to bomb targets in Gaza. He then went on to say: “If you’re defending Israel right now you’re an awful human being.” In alluding to American citizens living in Israel who died while serving in the Israel Defense Forces during the conflict, he proclaimed: “No wonder Israel prefers killing Palestinians from the sky. It turns out American college kids aren’t very good at ground combat.” (This, like much else that he proclaims, is of course nothing but nonsensical vituperation. Israel’s military is hardly significantly populated by “American college kids,” and it is unimaginable that he knows anything at all about the combat performance of dual nationals who serve in the IDF, only that at least two young men who grew up in America were killed in the early days of the conflict with Hamas.)

The primary dodge of Salaita’s apologists is to claim that however insulting and incendiary such language may be, it should be taken only as expressing the emotional and moral outrage of a person aware of the Palestinian suffering during the Gaza fighting – as though holding strong emotions excuses the use of otherwise inexcusable language.

However widespread that defense has been, its emptiness has been shown in an editorial in the Forward and a post from Northwestern University Professor Steve Lubet in the Faculty Lounge which have pointed to similar invective in one tweet posted well before the Gaza fighting began and in another posted quite soon after it did. Thus on April 25 Salaita wrote: “I’ve had a horrible influx of Zio-trolls today. It’s like getting a case of the scabies. They burrow in and you want to rip off your skin.” And on July 9, the second day of Israel’s bombing of Gaza, he said: “There’s something profoundly sexual to the Zionist pleasure w/#Israel’s aggression. Sublimation through bloodletting, a common perversion.” Meanwhile, writing in Tablet, Liel Leibovitz has revealed how such attacks on Israel and its supporters have appeared throughout Salaita’s published works, not only in his supposedly spontaneous tweets.

Charges about anti-Semitism in Salaita’s tweets are more directly rebutted by use of the familiar assertion that those charges are made by friends of Israel in an attempt to silence any criticism of that country (whereas it is of course Israel’s detractors who themselves are attempting to pre-emptively block any discussion of instances of anti-Semitism in their rhetoric). Similarly, there has been repeated testimony to the fact that Salaita himself is not an anti-Semite – reducing the entire discussion to the applicability, or lack thereof, of that personal label.

Along with those defenses, Salaita’s supporters have claimed that the tweet in which he said “Zionists: transforming ‘anti-Semitism’ from something horrible into something honorable since 1948” was interpreted out of context and that he was actually simply making an observation and expressing his regret about that, since he is opposed to anti-Semitism himself. Not surprisingly, this reading of the text has not been persuasive for those who take the sentence fragment in a more straightforward way, as meaning what it seems to, else why use the word “honorable.”

The arguments defending Salaita against anti-Semitism charges come together in an August 17 letter that was sent to Phyllis Wise, Chancellor of the University of Illinois at Urbana-Champaign, by Professor Michael Rothberg, Head of the Department of English and Director of the Initiative in Holocaust, Genocide, and Memory Studies at that university. It is a document cited in the Forward editorial as an example of attempts to “excuse [Salaita’s] language [which] would be laughable if they weren’t so dismaying.”

After telling the chancellor that he has “published work relevant to this case on antisemitism,” Rothberg wrote: “I strongly believe that neither Professor Salaita himself nor the tweets that are at issue are antisemitic….Indeed, Professor Salaita has stated repeatedly in numerous tweets and writings that have not been cited by his detractors that he opposes antisemitism and racism of all kinds….The tweets that have been reproduced again and again in reports in this case are not expressions of antisemitism but criticism of how charges of antisemitism are used to excuse otherwise inexcusable actions.”

What Professor Rothberg and others who have written in this vein miss, or choose to ignore, is that rhetoric can convey anti-Semitic content even if the author is not a dyed-in-the-wool anti-Semite. And in fact, in dealing with such matters, especially today, it can be said to be the content of the statements under consideration far more than the beliefs and professed intent of the author that is most important. The question of whether or not Salaita is anti-Semitic in his heart and as a matter of ideology (no matter how he may feel about or relate to individual Jews) is, I believe, a diversion from the key issues in this discussion.

Anti-Semitism, as we have sadly learned, is alive and kicking today, with traditional anti-Semitic motifs, images, and language frequently seen in hostile portrayals of Israel and its supporters. Thus, as Professor Lubet observed in writing about two of the tweets I cited above, “It is especially repulsive to refer to Jews (any Jews, even the hated Zio-trolls) as vermin, or to add a salacious twist to the ancient anti-Semitic blood libel accusation.”

As is so commonly the case with today’s hostile rhetoric, Zionist has replaced Jew as the demonized Other. And thus we hear about dehumanized “Zio-trolls” in one of Salaita’s tweets, while in another we hear about the “Zionists” whose actions have been so despicable that they have transformed anti-Semitism (a term invented to identify the hatred of Jews) into “something honorable.” And thus, as others have pointed out, there is a decided echo of the blood libel charge in the tweet of his which asserts: “If Netanyahu appeared on TV with a necklace made from the teeth of Palestinian children, would anybody be surprised?”

We live at a time when the hatred of Jews focuses on Israel and when traditional anti-Semitic tropes are being applied to Israel and its supporters to create what has been labelled a new anti-Semitism.. As the events in Europe this summer demonstrated, rhetoric suffused with such content can sometimes provoke violent action. But even without that result, the language creates a climate in which Jews are once more seen in stereotypical ways, as power-seeking,bloodthirsty, evil monsters.

Salaita’s most vocal supporters, out to protect his reputation while championing his cause, have muddied the waters about these matters while themselves at times endorsing his invective. But critics who claim that Salaita’s words are often weighted down with anti-Semitic baggage are not tossing around the term anti-Semitism simply as a way to impugn him personally.

In his letter to the chancellor, Professor Rothberg tells her that he hopes his comments “might at least give you pause about the way that Professor Salaita’s remarks have been characterized by those hostile to his political convictions.” I would instead suggest that it is the way those of Salaita’s advocates who share his political convictions and often his animosities have obscured serious consideration of the subject of anti-Semitism that merits attention. It is revealing and troubling that so many of his supporters deny or turn their backs on the implications of an academic’s use of language that often crosses boundaries into what at least for a while after the Holocaust was considered unacceptable discourse and enters into the dark world of anti-Semitica.

About the Author
Michael Kotzin publishes widely on anti-Semitism and related issues. A collection of his writings from 1988 through 2013 entitled "On the Front Lines in a Changing Jewish World" is forthcoming.
Related Topics
Related Posts
Comments