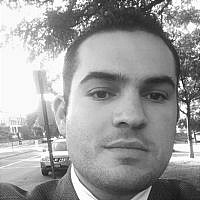 The Blogs
Maxwell Adelstein
Apply for a Blog
Please note that the posts on The Blogs are contributed by third parties. The opinions, facts and any media content in them are presented solely by the authors, and neither The Times of Israel nor its partners assume any responsibility for them. Please contact us in case of abuse. In case of abuse,
Report this post.

Anti-Semitism in the United States is back, and back in full force! (This is not to say that hatred of the Jewish people ever was truly or meaningfully stamped out) The Jewish people were lucky to have experienced a few decades long period of being relatively normalized actors in the socio-political landscape of this nation, however, we no longer have this luxury. Further, this writer has been very vocal in asserting that our people occupy an extremely weird ideological and political space in this nation. It is now time to have a nuanced discussion on how to achieve broad based support for the Jewish people from all segments of American Society.

Estimates assert that 70% of voting age Jews in this country support the Democratic Party or at least, Democratic candidates. (JNS) I firmly believe this percentage will shift significantly as the Democratic Party embraces far left factions that embrace age old anti-Semitic tropes, and the rise of the “Berniecrats” that lend legitimacy to BDS. Radical leftist dogma has dredged up classical blood libel style incitement, conveniently repackaged as “anti-Zionist” screed.

Conversely, I believe that this shift will not be all the way to the right of the spectrum. To be very clear, modern Nazism and classical White Supremacy make their home on the fringes of the right. Xenophobia, racism, and overt bigotry have always been hallmarks of extreme white nationalism that is associated at times with the fringes of the Republican Party. This is not to be confused with true patriotism, and love for the United States. I, myslef am a real patriot, but my America is the land of opportunity my grandpa found when he survived the Holocaust.

So where do the Jewish people fit into this new political matrix? We either find ourselves othered or jerked around by one side or the other to prove a political point. Many of my peers and fellow Jews expressed that Former President Barack Obama’s strained relations with Israel, and recent UN snub were hallmarks of the left (Democrats) abandoning the Jewish people. While I would not go that far, considering the last administration did approve a 38 billion dollar military stimulus package for Israel, I too was disheartened by The Democratic Party being coopted by pernicious anti-Israel/ anti-Semitic entities.

Moving on to present times I see many of my fellow Jews either claiming that Donald Trump is “not my president,” or being apologists for every action our new Commander and Chief makes. In my view, neither are beneficial for the utility(greater good) of the Jewish people in this country. While President Trump has been dissmissive and skiddish in terms of publicly condemning the spike of anti-Semitic activity in the United States, Vice President Pence personally helped to clean up and repair the vandalized Jewish cemetary in St. Louis.

So what am I proposing here? I fully understand the axiom dictating that two Jews will have three opinions, but where are my fellow moderates who want to transcend political binaries and work together to bridge the divides that are seperating the Jewish people from our essence?

My charge to the whole of The American Jewish Community is to come together in this time that WE ARE ALL being targeted by maniacs on both sides of the aisle, and work to better stand up for ourselves collectively. Instead of playing the same tired political blame game where we stick to our perpetual under-nuanced confirmation biases, let us stand together as one people. As Americans, and as Jews, the time is now to prove just how strong our community is!

Only when we do the work to become unified, can we hope to bring other ethnic and religious groups into our corner of support in a manner that is not susceptible to cooptation by self serving political interests. This may all be a pipe dream, but I am looking for people willing to aid me in this work!

About the Author
Maxwell Adelstein is a senior at Goucher College in Baltimore. He hails from Los Angeles CA, and has nothing but undying love and support for the Jewish state of Israel. He is the grandson of a Holocaust Survivor, a Hasbara fellow, a proud Jew and proud Zionist.
Related Topics
Related Posts
Comments