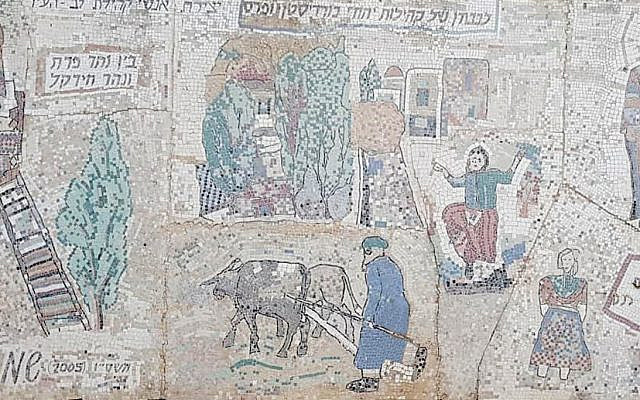 The author took the photo in Jerusalem. It is about the way of Kurdish life between Euphrates and Tigris rivers in Kurdistan. It is dedicated to the Jewish communty from Kurdistan and Persia.

When the last groups of Jewish Kurds left Kurdistan for imagined Eretz- Israel in 1951, for their Kurdish neighbours in Zakho it was an unbearable loss. The Jewish Kurds were deeply-rooted and decent neighbours. The non-Jewish Kurds could not accept these neighbours leaving them, and had shared the same neighbourhoods, tea houses, shops and markets for many generations. For the Kurds, the emigration of these Jewish Kurds coincided with the loss of the long-term established social relationship between the two groups as well as the loss of economic benefits and artistic skills that the fellow Jewish Kurds offered. These social and economic activities as well as the mutual dependence between the two groups came to an end as the Kurds were unable to prevent their neighbours’ departure.

The relationship between the Kurds and Jews has deep historical roots traced back to the period of the captivity of the Jewish tribes by Assyrians 2800 years ago according to The Talmut, and their liberation by the Medes under the leadership of Cyrus the Great in the 6th century BC. King Cyrus the Great, who is often identified as the King of Media, but also occasionally the King of Persia, conquered Assyria and caused the collapse of its empire. As soon as Jews were liberated from ruthless Assyrian captivity, he granted them the freedom to return to their holy land or to settle in cities of Medes including Erbil, Zakho, Amediye Diyarbakir, Mardin, Urmiye and Qamishlo. During the 1st century BC, many Kurds were allowed by rabbinic authorities to convert to Judaism and acquired Jewish traditions and religion.

The Kurds continued to express their Median identity as they name their children after the Medes, and used names such as Med and Medya for the first Kurdish satellite TV stations in exile. They also continued to celebrate their national, and pre-Islamic, the Zoroastrian holiday of Newroz, and to tell the story of Medes’ liberator Kawa the Blacksmith. For the Kurds, Kawa is Cyrus, who led the Medes to topple the ruthless Assyrian empire in 612 B.C.  Having regarded the Medes as Kurdish forefathers who liberated the Jewish tribes from Assyrian captivity and set them free, we can address the beginning of the relationship between the Kurds and the Jews, which has persisted for over 2600 years. Some Kurds claim that they share even the Jewish origin. They believe that they are remnants of the Ten Lost Tribes, but they were forced to adopt Islamic religion upon Arab conquest of Kurdistan.

Since the 7th century, Kurds have been forced to convert to Islam, and have been permanently under the control of oppressive Arab, Iranian and Turkish regimes. Under the Islamic rules, some of the Kurdish tribes exploited the weak and vulnerable status of the Kurdish-Jewish neighbours and adopted a policy of discrimination and exploitation, but the majority of Kurdish tribes disapproved of the discriminatory policy of ruling authorities, and afforded Jews adequate protection against Arab tribes.

The non-Jewish Kurds have been prevented from fostering this historically close relationship and affinity with the Jewish Kurds, who maintained connections with Kurdistan and its elements. This, for example, can be confirmed through cultural commonalities, traditions, and the way of life, as well as the emotional ties, collective narratives of and positive mutual perception between the Kurds and contemporary Kurdish-Jewish communities. These elements also constitute the common past and collective destiny of Kurdish and Jewish societies. Many Kurds in the diaspora who I interviewed stressed the deeply-rooted cultural, historical and spiritual ties with the Jewish community. They also underlined that this could be one of the main reasons that Kurds are targeted by Jihadists and anti-Semitic political parties in Syria, Iraq, Iran and Turkey.

The nationalistic Sunni regimes and ultra-nationalist movements in Turkey, Iraq and Syria, as well as the Iranian Regime pursue anti-Semitic approaches. Their anti-Semitic ideology and stance are not a novel matter as the members of Jewish Kurdish community were often discriminated against under the rule of the Ottoman Empire due to their identities as religious minorities in a Muslim empire. They were forced to pay double taxes and were excluded from the higher structures of the Ottoman Empire. The newly formed Iraq was no different; as soon as this state was created the persecution of Jews started, causing them economic and social hardships. In the 1940s, the Nazi regime reached out to the pan-Arabic Rashid regime in Iraq to implement genocidal politics against the Jewish community in Iraq and in Kurdistan.

Turkish and Arab left-wing groups also promoted anti-Semitism within the context of the Palestinian conflict in the 1970s and 1980s, and continue to this day. Furthermore, the pan-Arab regimes both in Iraq and Syria as well as the Turkish regimes were the main sponsors of anti-Semitism in the Middle East.  These regimes have adopted draconian measures against the Kurdish population in their homeland and continue to present the Kurds as the enemy of Israel. Ostensibly, Islamist regimes and networks, as well as mainstream media of Turkey promote anti-Semitic sentiments amongst the Turkish public. This type of anti-Semitic approach has been forcibly imposed in the Kurdish region of Turkey on the wider Kurdish population. For example, the Turkish regime intentionally promotes the organisations of Islamic days in the Kurdish capital city of Diyarbakir. The Turkish authorities turn the organisations of such events into anti-Israel rallies and stir up anti-Jewish sentiments. However, the local Kurds pointed out that the majority of individuals participating in such events are Arabs and Turkmans or those Kurds who are actually state agents, members of Turkish commanded paramilitary militias (village-Guards), or members of Turkish Hezbollah established by the Turkish MIT to oppress Kurds and Kurdish movements. Moreover, Turkish scholars and journalists writing about the relationship between the Kurds and Jews often seek to produce distorted knowledge to harm this relationship and evoke mutual suspicion amongst Kurdish and Jewish communities.

While the Turkish regime seeks to indoctrinate the Kurds into anti-Semitic ideology, many Arab tribes and regimes in Syria and Iraq accuse the Kurds of being the followers of Israel. They have threatened the Kurds if they establish any links with Jewish organisations or representatives of Israel. The Kurdish politicians of Rojava in Europe, at several public meetings, expressed that the Kurds and Jews are companions and share a collective historical plight in terms of persecution, discrimination and statelessness However, the Kurds in Rojava are extremely vigilant not to reveal this crucial tie due to the threat from their Arab neighbours in addition to similar propaganda from Turkey and the Jihadist factions that it sponsors, as this could be made into a justification to commit genocide against the Kurds. I have heard similar stories from politicians and individuals from the Kurdistan regions of Iraq and Turkey. The Kurds from Iran expressed their affiliation with the Jewish Kurds but were very careful not to overtly emphasise their sentiments due to the threat posed by the Iranian regime. In addition, during my field research, many Kurdish immigrants in various European countries shared their experience of undergoing hatred, violence and discrimination at the hands of Turkish and Arab immigrants for the stance of the Kurds against anti-Semitism and their friendliness toward the Jewish community.

Since most Kurds at home and abroad refuse to an adopt anti-Semitic approach, they have been subjected to assaults and persecution through the punitive and hostile policies of the aforementioned regimes. Such policies have included accusing the Kurds of working on the establishment of their state, which these regimes name ‘the second Israel’. As the Kurdish actors’ power does not match that of these regimes, they have limited capacity to challenge the anti-Semitic policy of these regimes and to re-establish such strong ties between the Kurds and Israel or Kurds and Jews in general.

Nevertheless, Kurdish politicians, intellectuals, and artists possess sufficient resources to reach out to distinct Kurdish constituencies in the diaspora and in the homeland to enlighten them about anti-Semitic policies and sentiments of the ruling regimes and liberate them from the toxic influence of these anti-Semitic regimes and elites. They can also familiarise the Kurdish population with anti-Semitism to consider all its forms as criminal offences, acts of oppression and racist sentiments which the same regimes form to persecute the Kurds in their own homeland and abroad. They can ensure that the mentality of anti-Semitism is not different from that of Kurdophobia. In other words, anti-Semitism is a synonym for the anti-Kurdish sentiments which stem from the same Islamic Turkish and Arab sources. Therefore, Kurdish intellectuals shoulder the responsibility to realise their commitment against anti-Semitism. The struggle against anti-Semitism matches the Kurdish demands for the acceptance and recognition of their cultural identities and political rights, as well as justice and peaceful coexistence at home and abroad. Moreover, it is crucial for Kurdish intellectuals to display the existing cultural, historical and spiritual affinity between the Kurds and the Kurdish members of the Jewish community in particular, and Jewish society in general.