I returned on Monday from a very successful trip to the US, where I met with several leading media personages, some of whom are American and some Israeli. I also attended two conferences, one in LA with over 200 of my students, and one in Washington D.C., where I was a keynote speaker at the Israeli American Council (IAC) conference.

I will provide further details on the meetings and conferences in later posts, but in this one, I’d like to focus on some of the insights I gained, and a new low in the landslide we call the “Israel-America relationship.”

First, I met with Tammi Rossman Benjamin, head of the AMCHA Initiative, an organization that strives to combat the burgeoning BDS (Boycott, Divestment, and Sanctions [against Israel]) movement on US campuses. While the descriptions of Jewish students fearing for their safety and even for their lives on American campuses that Mrs. Rossman Benjamin provided did not surprise me, they did stress the importance of hurrying in spreading the message of Jewish unity as a means for survival.

A little over a week later, I attended a discussion at the IAC where people described first hand experiences of family and friends who suffered anti-Semitic attacks on various levels of severity. These descriptions were in perfect match with what I’d heard from Mrs. Rossman Benjamin.
At the IAC, I also learned that convincing Jews (in this case Israelis living in the US) that the task of the Jewish people to be a light for the nations is as valid today as it was 3,000 years ago, and that it entails Jewish unity as the means for achieving it, was going to be a harrowing feat. But I also know there is no other choice.

Just yesterday, Eric Miller reported on Israel USA that while “the Obama administration is contemplating a sweeping amnesty for millions of illegal immigrants to the United States, the US State Department is refusing to extend a simple P1 visa currently held by Israeli basketball star Gal Mekel of the NBA. The State Department’s actions have prevented the NBA’s Indiana Pacers from signing Mekel.” What can AMCHA do against that? What can anyone do against that?

We need to understand that anti-Semitism is not a rational state of mind; it is an ingrained state of being deeply rooted in the unconscious of almost every non-Jewish person on the planet. The vast majority of those who are still not anti-Semitic will become so in the foreseeable future. The rest will become pro-Jewish, but they will be a paltry minority whose voice will not be heard when things get even worse.

The only ones who can reverse anti-Semitism are we, the Jews.

About a month ago, I met with Hebrew University Prof. Robert S. Wistrich, head of the Sassoon International Center for the Study of Anti-Semitism, for a televised discussion on the roots of anti-Semitism. Prof. Wistrich, one of the world’s foremost authorities on anti-Semitism described in fascinating detail the “incarnations” of anti-Semitism over the ages. But when I pressed him about the reasons why there is anti-Semitism to begin with, he said—after a long pause—that the information he had provided were his views as an academic. However, his views as an individual who has been “eating, drinking, and breathing” anti-Semitism for decades (those aren’t his exact words, but the message is accurate), he believes that the reason why there is anti-Semitism has to do with the age-old mission of the Jewish people. After another short pause he added that it has to do with the inclusive commandment, “love your neighbor as yourself.”

On October 29, Prof. Wistrich published in Mosaic Magazine an essay titled, “When All Is Said and Done in France…” His concluding words were “Anti-Semitism, as so often in Jewish history, may well be the immediate trigger for change. But much more is involved than that. There is also the haunting … matter of Jewish destiny.”

Earlier in the essay, he pointed out an issue that I believe is relevant to all Jews in Western countries, and not just to French Jewry: “I have also encountered well-placed and upwardly mobile French Jews who may acknowledge the current ‘national malaise’ but refuse to believe it will ultimately affect them, who are altogether disconnected from the hardships experienced by Jews and non-Jews alike at the street level, who basically deny that anti-Semitism even exists in France, or who think it is merely a passing trend that will disappear as soon as economic conditions improve. We have been there before, many times in Jewish history, and sadly it appears that some Jews will never learn.”

We need to realize that anti-Semitism won’t go away until we make it go away through our unity. Very few among the nations are grateful for our numerous contributions to science, medicine, culture, and technology. The majority, as Amos Oz said, “don’t want us to be.” This is not the kind of “light for the nations” they expect from us. They are looking for a light out of the tunnel of the social, emotional, and mental breakdown that the Western world is suffering. And that light exists in unity.

However, they will not know how to unite, as reality proves, until we show them the way. For now, the only thing that unites the extreme left with the extreme right, and the secular with the religious, is their hatred for us. This will not yield wholesome fruits even for them, much less for us.

But when we unite in order to pass on that unity to the rest of the world, meaning in order to set an example of unity, we will then be spreading that spirit all around. This is what the world needs from us. It is not my own ideas that I am spreading; it’s been the view of Kabbalists and Jewish sages throughout the ages. In my book, Like a Bundle of Reeds: why unity and mutual guarantee are today’s call of the hour, I have given numerous references to such statements.

In conclusion, I’d like to turn to my teacher’s father, the great Kabbalist, Rav Yehuda Ashlag, author of the Sulam (Ladder) commentary on The Book of Zohar. During the late 1940s and early 50s, he wrote The Writings of the Last Generation. In that composition he stated, “Judaism must present something new to the nations. This is what they expect from the return of Israel to the land! It is not in other teachings, for in that we never innovated; we were always their disciples. Rather, it is the wisdom of bestowal [referring to the wisdom of Kabbalah], justice, and peace. In this, most nations are our disciples, and this wisdom is attributed to us alone.” 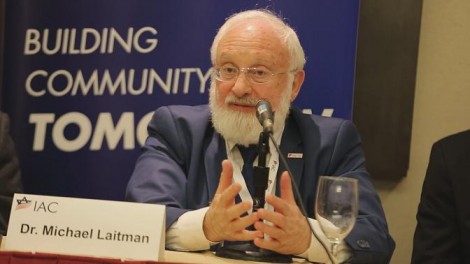