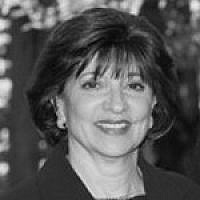 Long before I blogged for the Times of Israel, I wrote my first letter to the editor of our local newspaper. It was also to be my last one for many years.

Today, with everyone still reeling from the horrific murders at the Tree of Life Synagogue in Pittsburgh on a Shabbat morning, news articles often mention anti-semitism. Is it any wonder that the program for the opening day of the Jerusalem Media Summit recently held in Jerusalem placed a special spotlight on anti-semitism? During those conference sessions and panels, my mind wandered back to my letter to the editor so long ago.

Then came the recent news of anti-semitic vandalism on homes in Seattle, following photos and news reports of a teacher at Columbia University arriving to work to find swastikas spray-painted on her office walls. “It’s very upsetting. It makes me feel very vulnerable,” she said.

I understood her feelings.

Back in 1982, I was living in western Canada, in idyllic Richmond, British Columbia, with its flat, rolling farms and blueberry fields forever.  Pierre Trudeau (the father) was Canada’s prime minister, Bill Bennett was premier of British Columbia, and Rene Levesque was the premier of Quebec. That same year, the first female justice was appointed to the Canadian Supreme Court, the first case of AIDS was reported, and I wrote my first letter to the editor.

In those days, the food section of Vancouver Sun was excellent. I still have some yellowing scraps of paper with favorite recipes clipped from those pages. After reading extensive coverage of the Christmas holiday season followed by endless Easter recipes and articles, I was disappointed that there was no coverage of any other spring holidays, so I decided to write a letter to complain, and did so without mentioning any specific reference to the Jewish holidays. 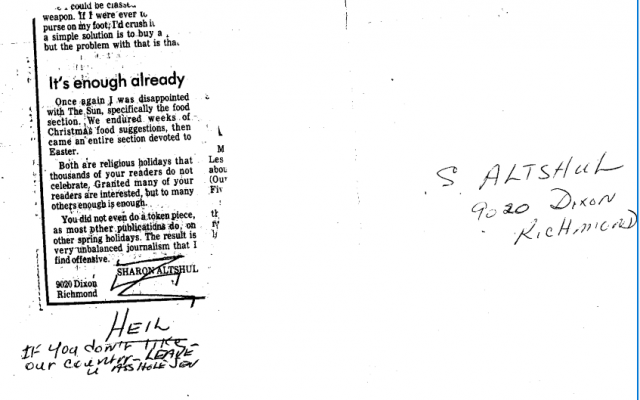 Letter found in my mailbox Richmond, BC. 1982

When I saw that my letter was published, I experienced a moment of excitement. Then that piece of hate mail arrived in my mailbox. As a stay-at-home-mother with four young children, like the Columbia professor, I too felt vulnerable.

Back then, in Canada of the early 80s, long before anyone was “anti-Zionist,” the word of the day was “multiculturalism.” It was official government policy, but still Jew-hatred simmered below the surface.

For all the current headlines about anti-semitism, and all the focus on anti-semitism at the Jewish Media Summit, by now we should be cognizant of the fact that anti-semitism in North America, whether in Pittsburgh or Seattle, or Canada, is nothing new. Like that professor at Columbia, and like me so long ago, we are all vulnerable, at any time or place.

If you don’t like our country – LEAVE – u Asshole Jew.”

Sometimes, we need is a little reminder. As President Rivlin said in recent CNN interview: “Anti-semitism is a pestilence, a dread disease, not just for us Jews but for the whole world and if the world does not confront it, it will corrupt us all.