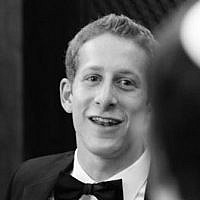 The Blogs
Zev Newman
Apply for a Blog
Advertisement
Please note that the posts on The Blogs are contributed by third parties. The opinions, facts and any media content in them are presented solely by the authors, and neither The Times of Israel nor its partners assume any responsibility for them. Please contact us in case of abuse. In case of abuse,
Report this post.

Last week the Rutgers-New Brunswick chapter of Students for Justice in Palestine held “Palestinian Awareness week” to “celebrate Palestine and its people.” One event they held, which was particularly striking was a ‘die-in’ in which students wore red-stained t-shirts and pretended to be lying dead at the center of campus. SJP claimed the event was held to commemorate the death of Palestinians during Israel’s recent Operation Protective Edge. Similar events took place on campuses across the United States.

SJP, at Rutgers and on other campuses, makes an effort to paint themselves as a pro-Palestinian organization interested in “celebrating Palestine and its people.” My question is this: how is lying down in red-stained T-shirts pretending to be dead celebrating the Palestinian people? Is it not just another attempt by “pro-Palestinian” activists to demonize Israel?

SJP often argues that being anti-Israel should not be equated to being anti-Semitic. I agree. In fact, as a strong supporter of the Jewish State, I am at times critical of the Israeli government, who like any government is not perfect. However, with regards to SJP, the line between being anti-Israel and anti-Semitic is very thin. SJP claims to be concerned about the Palestinians’ human rights, yet time and again singles out the lone Jewish State for criticism, while ignoring other states that mistreat Palestinians. As a senior at Rutgers who has followed SJP’s events for four years, never have I seen SJP rally for the 400,000 Palestinians in Lebanon barred from citizenship, desirable occupations, and property ownership. Never have I seen SJP protest the Jordanian government for discriminating against millions of Palestinians including forcibly detaining them in refugee camps and annulling many of their citizenship rights. Never have I seen SJP demonstrate for the thousands of Palestinians who have been slaughtered in the Syrian Civil War. The fact that SJP repeatedly singles out Israel for condemnation while ignoring the vast human rights violations against Palestinians in the Arab world makes me question whether SJP is truly concerned about the Palestinians or whether their motives lie elsewhere.

Furthermore, during the die-in SJP members openly shouted, “From the river to the sea, Palestine shall be free.” This statement refers to the entire area between the Jordan River and the Mediterranean Sea, including the Jewish State. This statement clearly affirms that SJP openly supports a Palestinian State in place of Israel, effectively reversing 1948 and eliminating the Jewish State. A statement like this and the fact that the only state singled out is the Jewish one is testament to the anti-Semitic nature of SJP.

Recent events in Israel and in Western Europe have reminded the world that anti-Semitism is unfortunately, alive and well. However, I am writing about this particular event, which took place on my campus and at others across the United States, to remind American Jews that anti-Semitism is not just found on the other side of the Atlantic, it is present right here on college campuses across the nation.

About the Author
Zev Newman is a Freelance Content Writer and Marketing Consultant that serves B2B and B2C companies around the world. His specialties include SEO, Content Writing, Social Media Management, and Digital Marketing Strategy.
Related Topics
Related Posts
Comments