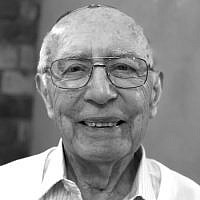 The Blogs
Ervin Birnbaum
Apply for a Blog
Advertisement
Please note that the posts on The Blogs are contributed by third parties. The opinions, facts and any media content in them are presented solely by the authors, and neither The Times of Israel nor its partners assume any responsibility for them. Please contact us in case of abuse. In case of abuse,
Report this post.

The dark Middle Ages passed and the Jewish people emerged from the period of relentless hounding by inquisitors, crusaders, blood libelers and all sorts of other fantastic accusers who pinpointed the Jewish people as a major source of evil in the bosom of humanity. We finally emerged into the limelight of brilliant enlightenment and emancipation, recognized as citizens equal to all other resident populations within the nations.

But history proved otherwise. The country of Kant and Hegel, Goethe and Beethoven, which reached the peak of modern culture, aspired to attain the zenith of freeing Europe and the Teutonic master race of the stumbling block in the path of their glorious destiny. “The Jews Are Our Misfortune,” the slogan coined by Heinrich von Treitschke, remained emblazoned above the front marchers of German culture. They wished to attain the peak of success in freeing modern Europe and the world of its most dangerous pest by the most advanced modern means created exclusively for that purpose.

From the German perspective their most glorious battle was only about to begin:

The war against the Jews had priority over the war with all other enemies;

The extermination of Jews took precedence over all economic considerations; badly needed Jewish manpower which could have made a substantial contribution to the war effort, was wiped out;

The six years of the Shoah, with its annihilation of Six Million Jews that became an inseparable part of the Second World War, struck like a thunderbolt from the clear blue. Anti-Jewish hatred seemed to peek out. It could not get worse than that.

Two and a half years after the continent of Europe was gorged with Jewish blood, the Jewish State received its recognition at the United Nations. Two and a half years after the curtain rose from the most hypocritical and obscene tragedy the universe ever witnessed, some nations momentarily overcame their crude animal instincts and cast their vote in favor of the Jewish “devil.” We earned our own state, Medinat Yisrael.

Now indeed we will prove to the world that the Jew in his own sovereign state is a different Jew from the one who went undefended, exposed to the mercilessness of the mobs for hundreds of years. Now we can prove, in the eloquent words of Winston Churchill, that we are “the most formidable and the most remarkable race which has appeared in the world.”

Mark Twain wasn’t a particularly great friend of the Jews. But this is what he said about us:

The Jew “has made a marvelous fight in this world, in all ages; and has done it with his hands tied behind him. …[Huge empires] rose, filled the planet with sound and splendor, then faded to dream-stuff and passed away;…The Jew saw them all, survived them all, and is now what he always was, exhibiting no decadence, no infirmities of age, no weakening of his parts, no slowing of his energies, no dulling of his alert but aggressive mind.”

Virulent anti-Semitism of the world notwithstanding, decimated by the ghastly Shoah — did you notice infirmities of age? Weakening of parts? Slowing of energies? Did you notice any of these as we are a top producer of high-tech? As we bring the blessings of desalinated water to a thirsty mankind? As we bring the blessings of our medical advances to friend and foe alike, including thousands of Syrians, even while they fight against us? Did you notice any dulling of our alert mind, slowing of our energies, as we are first to extend help to Tsunami or earthquake victims? The first, and the best and the most!!!

We made this country green. We turned a wasteland into a pleasure for the eyes. We gave it millions of trees, the only civilized country where the number of trees is annually growing rather than diminishing. The only country where people will stop for you if you are stuck on the side of the road with a flat tire. The only country where “angels” keep their doors open to hikers on the Israel Trail. A country shamefully denounced by shameless nations for apartheid, whose stores and beaches and places of entertainment are fearlessly filled by multitudes on their holidays whom we are supposedly persecuting. A country whose hospitals know no discrimination whatsoever, not with patients, nor with doctors, nurses and aids. A marvelous country, altogether seventy years old, surrounded by threats, and danger, and terror. A superb people recently bled white by the horrendous loss of SIX MILLION!!

We know of course that we have things to improve on:

We know. So is anti-Semitism. It is an incurable disease. But the Jewish people will outlast it — for sure!

About the Author
Ervin Birnbaum, 89, is Holocaust survivor and Exodus graduate, a rabbi, a professor of Political Science, a social activist, and the author of four books.
Related Topics
Related Posts
Ervin Birnbaum
Comments