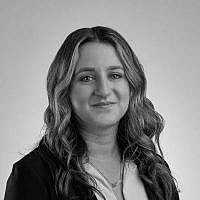 The Blogs
Hannah Rose
Apply for a Blog
Please note that the posts on The Blogs are contributed by third parties. The opinions, facts and any media content in them are presented solely by the authors, and neither The Times of Israel nor its partners assume any responsibility for them. Please contact us in case of abuse. In case of abuse,
Report this post.

I’m sure no one is surprised to see another article on anti-Semitism.

This year has been a flurry of articles, accusations and open letters; yet we are no better off than when we started.

NUS referendums have come and gone, accusations of anti-Semitism have arisen and been conveniently forgotten.

Perhaps people have come to see anti-Semitism as an inconvenience in their political agendas.

Perhaps people have, once again, forgotten the devastation that anti-Semitism can bring.

Anti-Semitism is not a pawn in your political game.

It is not something to claim to fight in order to gain support, only to forget about after a vote is won.

Our oppression is not to be used and abused, forgotten when convenient and usurped for power. It is our oppression. It ruins university experiences, takes lives and threatens an entire people.

It’s time people stopped picking and choosing which oppressions they stand by and which they ignore in order to further their political ideology and career. This isn’t about who wants to score the next point or which faction wants to win which position; this is anti-Semitism, plain and simple.

If you are reading this and are already forming arguments about how to label this as a smear, then you, in my book, are anti-Semitic. Instead of blocking out accusations, try to understand why you have been accused.

If you are reading this from a position of responsibility in a students union, contact a Jewish student, ask them about their experiences and listen to them. Do not then write an article claiming you have championed anti-Semitism, give yourself a pat on the back and return to your daily politics.

If you are reading this and have signed a letter smearing the recent anti-Semitism report from HASC so that you don’t have to listen to it, I suggest you retract your signature. This is far bigger than you, your SU, our student movement or our country. This is anti-Semitism, this has been going on for centuries, and I think it’s time it stopped.

About the Author
Hannah Rose is a Research Fellow at the International Centre for the Study of Radicalisation and PhD candidate in War Studies at King’s College London. She also holds an Associate Fellowship from the Institute for the Freedom of Faith and Security in Europe. Her research focuses on far-right antisemitism, philosemitism and its relationship with rising islamophobia. Hannah is a former President and current Trustee of the Union of Jewish Students.
Related Topics
Related Posts
Comments