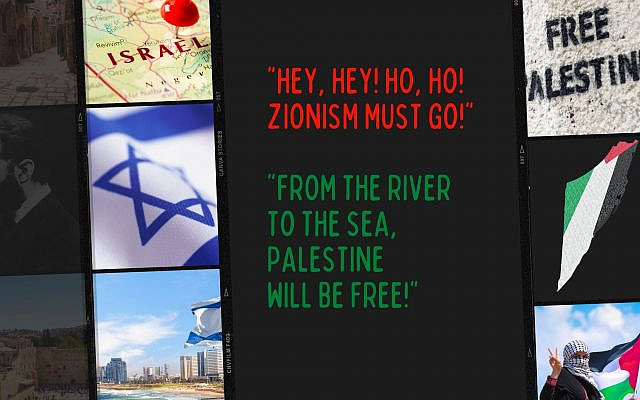 “From the river to the sea, Palestine will be free!

These are overt calls for the elimination of the Jewish state of Israel. Make no mistake: these are calls to genocide. There is no realistic way the Jewish state could transform into a Palestinian state that would not involve the mass expulsion and mass murder of Jews.

Through allyship, propaganda, and intersectionality, there has been a persistent campaign  over the course of decades to make the case that genocide of the Jewish people of Israel is an act of social justice. The idea that Israel should not exist and the idea that Jews are colonizers who have no right to remain in Israel is now commonly seen not only as acceptable but as justified. In other words, genocide, ethnic cleansing, mass expulsion, and mass murder is now commonly seen not only as acceptable but justified if it’s perpetrated against the Jews of Israel. Organizations that embrace anti-Zionism out of a sense of moral obligation and social justice need to understand the destructive, immoral, and unjust implications of their position.

Criticism of Israel by a good faith actor, by someone who believes that the Jewish state has a right to exist, is one thing. However, the arguments against Israel by those who are only going to be satisfied with Israel’s elimination are red herrings; these people are not interested in improving Israel but in destroying it. To the individual who holds the latter position, that Israel must be replaced by a Palestinian state, I say:

I don’t care if you think Israel is good or bad or if it’s a democracy or not, particularly when no other country’s very existence is placed into question on the basis of its conduct or its form of government.

I don’t care if you think all the archaeological and historical evidence of a Jewish presence in Israel going back thousands of years is true or not or if it’s relevant or not.

I don’t care if you think Jews are colonizers, particularly when no one seeks the expulsion of non-indigenous people in America and Canada who, unlike Jews in Israel, have no claim to having ancestral roots in the land in which they live.

I don’t care if you think Jews are from Mars.

If your position is that the seven million Jews of Israel do not belong in the land of Israel and you support the end of the “Zionist project”, you are for massive ethnic cleansing and genocide. That is not justice no matter how you frame it. There is no justification for it.

If you think that seven million Jews will be accepted to live, and to live freely, in an independent Palestine under a Palestinian majority (there are about 6 million Palestinians worldwide), that is unrealistic, to say the least.

When Mohammed el-Kurd, a Palestinian journalist, poet, and speaker, recently spoke at Duke University and was asked where Jews should go if Palestinians were to take over the state, he replied, “I don’t care. I truly, sincerely, don’t give a f***” And the audience cheered approvingly. The anti-Zionist vision is not one in which seven million Jews will be welcome to remain in a “free Palestine”.

As for theoretical discussions on whether or not Israel should have come into existence to begin with, these are moot points. Israel exists. It has 9 million citizens – 74% Jewish and 21% Arab. The State of Israel is celebrating its 74th year of independence this Yom Ha’atzmaut. Anti-Zionists want this Yom Ha’atzmaut to be the last one ever. And if not this one, then next year. The attempt to reverse the tide of history has very real and catastrophic implications. On a practical level, anti-Zionism is a genocidal ideology and it should be called out at every turn.

About the Author
Eyal Bitton is the cantor of Congregation Neveh Shalom in Portland, Oregon where he incorporates Sephardi/Moroccan music, Ashkenazi music, popular adaptations, and original compositions into the service. As a composer and writer, his theatrical works have been produced in the US, Canada, Kenya, and China.
Related Topics
Related Posts
Comments