British Jewry is in a state of shock. And not just because they feel that the levels of antisemitism are rising – for the first time since the Holocaust; not even because antisemitism is increasingly found in the mainstream, rather than on the dark fringes of the political spectrum.  No, it’s more than that: British Jews are shocked to realise that so much of that antisemitism is found in the Labour Party.

Following the Holocaust, most Jews in the West instinctively associated antisemitism with the extreme right.  The Left, which embraced anti-racism as one of its main defining values, was seen by most Jews as their natural political home.  Hence the shock, the frustration and the bitter taste of betrayal.

But the notion of a Jew-friendly Left has been a Western illusion.  Those Jews who survived the Holocaust in Eastern Europe tell a different story.  They have lived under Stalinist regimes that, while killing individual Jews in a far less systematic manner, resembled the Nazism in their determination to destroy Jewishness.

In fact, as left-leaning authors such as Dave Rich, David Hirsch and Prof. Robert Fine have brilliantly shown – the Left has a history of ideologically-entrenched antisemitism comparable to that of the Right.

Far-left ideologues viewed Jews as part of the structure of capitalism – and hence destined to vanish together with that obsolete socio-economic system.  Karl Marx and Bruno Bauer may have disagreed on fine points of doctrine; but they both agreed about the Jews’ ‘ugly character’.  As Marx famously put it in ‘On the Jewish Question’:

“What is the secular basis of Judaism?  Practical need, self-interest.  What is the worldly religion of the Jew?  Huckstering.  What is his worldly God?  Money. […]

Most Jews are shocked when reading Marx’s pamphlet for the first time; astounded, a friend once exclaimed: “It sounds like something Hitler would say!”  Well, it does indeed – and not by chance.  Antisemitism has been called “the socialism of fools” – by the German social-democrat ideologue August Bebel.  An alternative description, however, would be ‘the socialism of extremists’.

In fact, paradoxically the concepts of Left and Right become increasingly meaningless as one moves closer to the extremes.  The political spectrum is not linear at all; it is much better represented as a horseshoe – with the left and right extremes much closer together than we’ve been accustomed to believe.

What characterises extreme ideologies (and extreme ideologues, irrespective of ‘flavour’) is that they view the world as divided into two irreconcilable camps – ‘we’ and ‘they’.  Those camps are construed as locked in some sort of existential struggle; not a difference of opinion, but a primeval conflict between the angelic ‘we’ and the demonic ‘they’; a conflict that can end only with the physical or ideological disappearance of the ‘they’ camp.  Put simply, extreme-left and extreme-right ideologies share the same fundamental, fanatical bigotry.

Historically, both right-wing and left-wing ideologies began to take shape at a time when science gradually replaced religion as the main source of power and influence in the Western society.  Unsurprisingly, therefore, both ideological families claimed the authority of science in order to justify their tenets.  Far-right and far-left differed in terms of the concept they focused on in order to draw that fundamental divide between the good/worthy/superior ‘we’ and the bad/undeserving/inferior ‘they’: extreme right ideologies were primarily obsessed with ‘race’, ethnicity or ‘blood’; while the left focused more on socio-economic ‘classes’.

But it would be a mistake to conclude that right-wing ideologies dealt exclusively in ‘biology’, while their left-wing counterparts focused entirely on socio-economics.

In fact, both ‘families’ mixed biology and economics in various proportions.

Nazis, for instance, saw a world divided between the ‘Aryan race’/the Herrenvolk and ‘inferior races’/the Untermenschen.  But, while the concepts were born of (pseudo-)biological differences, they very much spilled over into socio-economics.  Nazis saw Jews not just as biologically inferior, but also as economic oppressors; they also viewed other ‘races’ (such as blacks or Slaves) as incapable of intellectual achievement – and hence not just biologically inferior but also less productive economically and, therefore, holding back the socio-economic progress of the Herrenvolk.  Nazis saw themselves as champions of an Aryan race that was both biologically superior and socio-economically oppressed.  It is not by chance that the full name of the German Nazi party was the National Socialist German Workers’ Party.  It saw the German nation as the vanguard of the Aryan ‘race’ – the elite of an elite; but it was also ‘Socialist’ and ‘Workers’ because it wanted to represent a class of people both oppressed and held back by the ‘inferior races’.

Similarly, while Communist ideologies viewed the world as divided into classes and more generally between ‘the workers’/the exploited and ‘the capitalists’/the exploiters, that initial socio-economic divide gradually acquired biological characteristics.  Viewed as idle parasites, ‘the capitalists’ were also portrayed as physically weak, atrophied.  Although interpreted these days as signifying only moral decay, the Leninist concept of capitalist ‘decadence’ was meant to also suggest some sort of physical frailty bordering on biological inferiority.  With the sensitive nerve tendrils of a novelist, H. G. Welles picked up on that when, in his Time Machine, described a society in which the two ‘opposed’ economic classes had evolved into two distinct species: the Morlocks and the Eloi.

The convergence between economic and biological is obvious if one compares works of art approved/encouraged/supported by the Nazis and by the Communist regimes.  They are incredibly similar: under both types of totalitarian rule, the ‘we’ camp was portrayed as not just morally superior, but physically imposing as well; conversely, ‘they’ were depicted as both morally and physically/biologically inferior.  Unsurprisingly, both the Nazi and the Communist regimes invested in physical education and assigned immense importance to success in sport competitions. 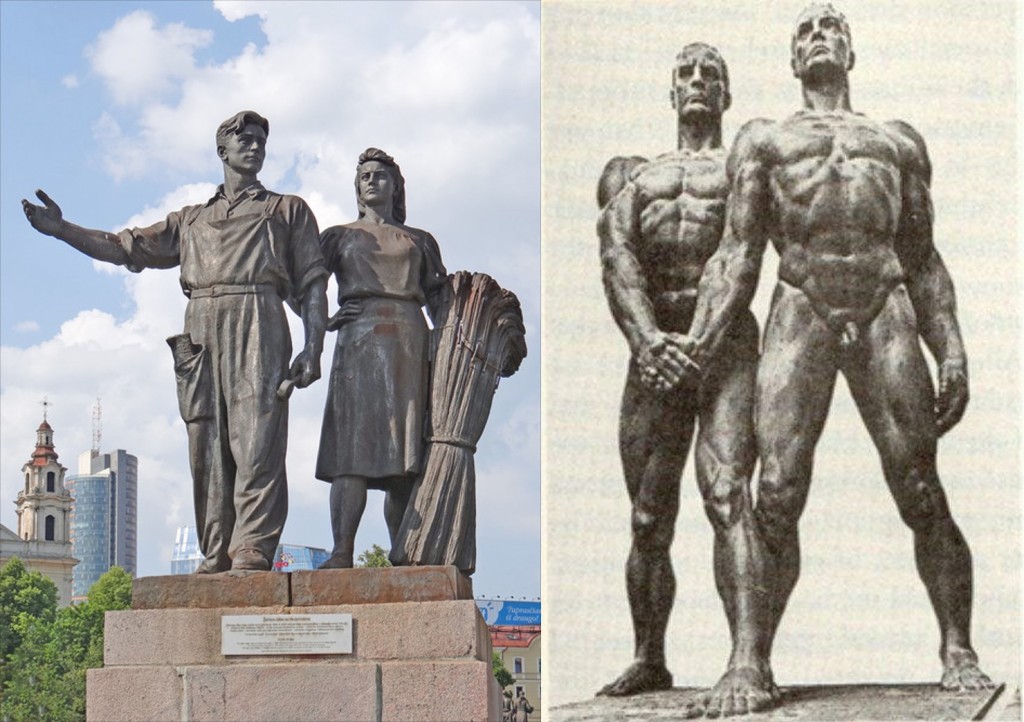 The conceptual differences between ‘class’ and ‘race’ have been much further blurred in recent times.

The extreme right increasingly sees itself not simply as the defenders of the Aryan or white race; but of a white working class they see as economically oppressed.

Conversely, the extreme left increasingly identifies ‘the oppressed’ with the non-white ‘races’ or minorities (blacks, Muslims, Asians) and ‘the oppressors’ with ‘the white race’/the West.

Thus, it would be wrong to view extreme left and extreme right as opposite political camps; in fact, each is much better understood as just the mirror images of the other.

But the two extremes share another trait: their fundamental disdain for Jews.  For both extreme right and extreme left ideologies, Jews are not just the ultimate ‘they’ – both ‘biologically’ and ‘socio-economically’; they are in fact the most convenient ‘they’.  Jews can be seen as either non-white ‘pollutants’ or as part of the privileged white race, depending on one’s argument.  In both cases, they can be portrayed as rich – and therefore ‘oppressors’ by definition. 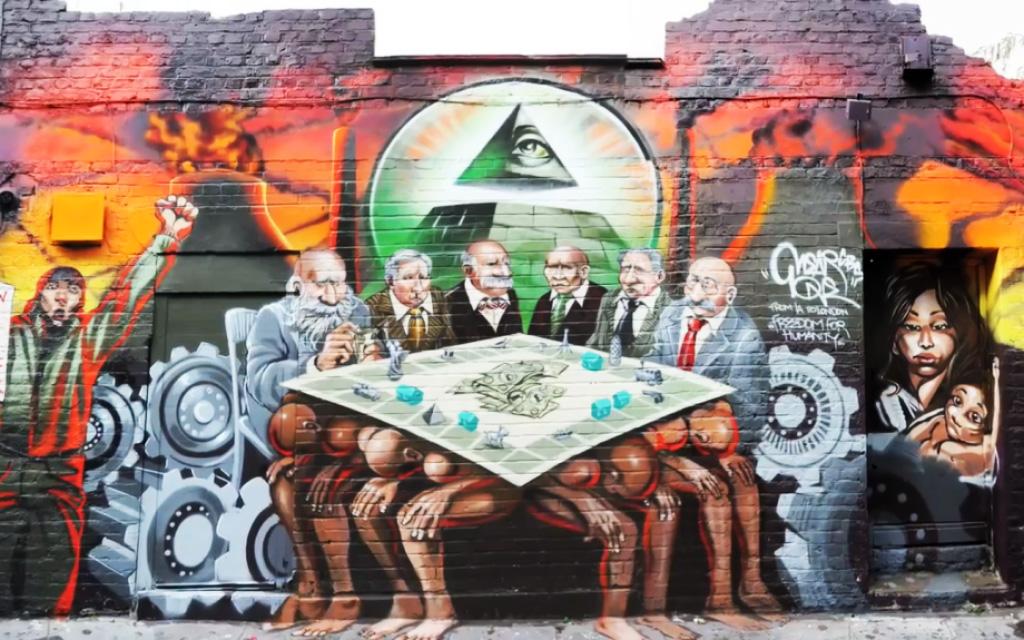 Mural by Mear One: ‘oppressors’ are white, with Jewish features; ‘the oppressed’ are portrayed with dark complexions. {Youtube screengrab}

Take for instance Mear One’s mural, which Jeremy Corbyn appeared to endorse.  Much has been written about the caricaturised Jewish features of the Monopol-playing ‘oppressors’.  Fewer people have pointed out, however, that the ‘oppressed’ (on whose backs the game of Monopol is being played) are portrayed as having dark complexions.  Jackie Walker’s contention that Jews were “chief financiers of the [black] slave trade” is a variation on the same theme.

This is significant and explains, to a large extent, the extreme-left’s knee-jerk hostility towards Israel: the Israeli-Arab/Israeli-Palestinian conflict is construed as a quintessential case of white oppressors vs. ‘brown’ oppressed.  In the extreme-leftists’ mind, hating the Jewish state and its supporters is not antisemitic; quite the opposite, it is the ultimate manifestation of anti-racism.

Pro-Israel discourse often highlights the country’s economic success, its proud status as ‘the start-up nation’.  But, far from endearing Israel to the far-left crowd, this only serves to reinforce its image as the well-to-do oppressor mistreating the pauper Palestinians.

Today’s high incidence of antisemitism in the Labour Party should come as no surprise; positioned left-of-centre in the past, the party has now been taken over by extreme-left factions.

Extreme ideologies – left or right – have an issue with Jews.  And not just because of biology and socio-economics, but because they are, in effect, religions – with adherents fuelled by messianic zeal.  ‘Believers’ cannot tolerate dissent.  But the Jews are the ultimate dissenters: whatever else they are, they insist on remaining Jews, on preserving some sort of separate identity.  For bigots, that’s heresy.

And extreme ideologies are built on bigotry – that’s why they are ‘extreme’.  For Jeremy Corbyn’s supporters, Tories are not political opponents; they do not count as people whose opinions – however wrong – are legitimate.  No, for Corbynistas Tories are demons, criminals, ‘Tory scum’.  Israel is not just another state whose actions and policies can be approved, admired or criticised – as the case may be; no, it’s the very embodiment of everything that’s evil: nationalism, colonialism, terrorism, Nazism, apartheid. 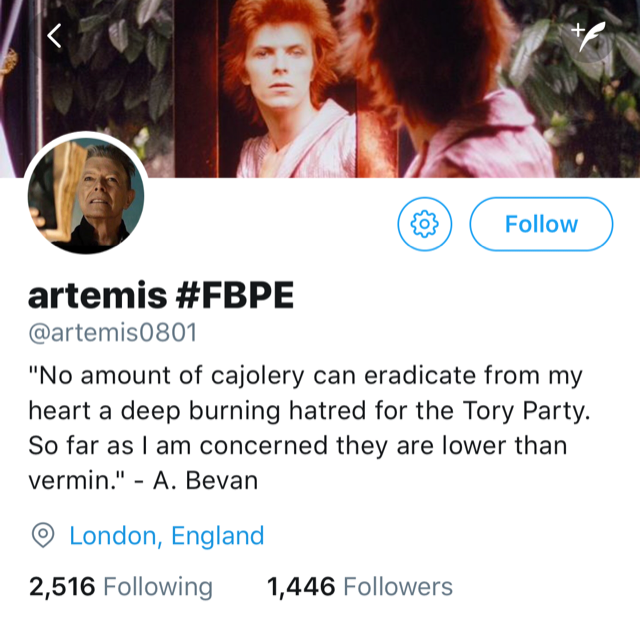 It is, therefore, ridiculous to hope (let alone expect) that Jeremy Corbyn would ‘clean’ the Labour Party of antisemitism.  One might just as well expect that kind of behaviour from a fascist.  Antisemitism is not some external infection; it’s not a virus that has somehow contaminated an otherwise sound body.  Rather, when it comes to extreme ideologies – left or right – antisemitism is organic; it is part and parcel of their ‘DNA’; it’s woven into their fundamental bigotry, into the very characteristic that makes them ‘extreme’.

As I write this, I know that many will protest: it’s not Jeremy Corbyn’s party; a party is more than its current leader, etc.  That’s all well and good – in theory.  In practice, Jeremy Corbyn has been elected leader of the party – twice; and with comfortable margins.  He’s been elected not because he suddenly became attractive, after decades of wearing out the back benches; not because ‘the country has changed’; but because the Extreme Left has infiltrated the party in large numbers and has taken it over.  The ‘believers’ have now achieved power and it is naïve to hope that they will relinquish it.  They make the rules – and they’ll make them in their favour.

As for the sane Labour membership, they need to overcome their emotional attachment to a name that no longer reflects what’s in the can.  Rather than attempting to valiantly but ineffectively fight the windmills of what should now be called Far-Labour, they should leave it in disgust and recreate the party they know and love – the True Labour.  They should do so now, while they still command seats, followers, political clout.  And dignity, and self-respect.  Or, they can stay in and suffer – while hoping for some improbable change.  But hope is not a strategy!

About the Author
Noru served in the IDF as a regular soldier and reservist. Currently a management consultant, in his spare time he engages in pro-Israel advocacy, especially in interfaith environments. He presented in front of Church of England and Quaker audiences and provides support to Methodist Friends of Israel. Noru is the Editor-in-Chief of 'Politically-incorrect Politics' (www.Pol-inc-Pol.com). Translated into Polish, his articles are also published by the Polish portal 'Listy z naszego sadu.'
Related Topics
Related Posts
Noru Tsalic
Comments