“Today, for the hate mongers, Holocaust falsehood, denial, bigotry, and antisemitism flourish, as it were, in a shrink-wrapped container that helps to extend its life that would otherwise spoil too rapidly.”

This Friday, January 27, marks the anniversary of the liberation of Auschwitz-Birkenau. The United Nations Holocaust memorial ceremony, in memory of the victims of the Holocaust, will take place in the UN General Assembly Hall.

This year’s theme, Home and Belonging, is to remind “us of our responsibility to respond with humanity to the victims of atrocity crimes, to counter hate speech, antisemitism, Holocaust distortion and denial, and prejudice – to do all we can to prevent genocide.”

H.G. Wells, the author, and social commentator said, “Human history becomes more and more a race between education and catastrophe.”

Some 90 years have passed since Adolf Hitler was appointed German chancellor, in effect preparing the start of the Nazi genocide against the Jews.

Today, for the hate mongers, Holocaust falsehood, denial, bigotry, and antisemitism flourish, as it were, in a shrink-wrapped container that helps to extend its life that would otherwise spoil too rapidly.

Today, H.G. Wells’ comment becomes more meaningful in a society, through time, that categorizes the Holocaust as nothing more than another volume of history. For Jews, it is indeed a race between education and catastrophe.

And as the Holocaust becomes for many nothing more than a distant memory, H.G. Wells’ comment becomes more significant as we attempt to hold on to the very essence of what it is to be a Jew. Antisemitism, hate, and intolerance continue unabated. There is no letter “L” for love in the word antisemitism, nor in the word education.

In a new survey commissioned by the Conference on Jewish Material Claims Against Germany, the Jewish Chronicle (UK) today stated the “new study reveals one quarter of Dutch millennials and Gen Z believe the Holocaust was a myth or exaggerated.” They added, “The Study also shows the majority of Dutch adults don’t know the Holocaust occurred in the Netherlands.”

Simply put, as many Dutch Jews will tell you, it is in the Dutch psyche to refuse to recognize that these truths exist.

This is even more remarkable when it is a known fact three-quarters of the Dutch Jews were murdered during WW2, the highest number of Jewish victims in Western Europe. 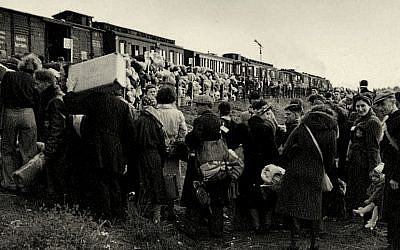 Dutch Jews board the train that is to take them to Auschwitz. Photograph from 1942 or 1943.
Photographer: Rudolf Breslauer. Source: Wikimedia Commons. Rechten: Public domain

How was the situation in the Netherlands different from that in Belgium and France?

Different occupying regimes. A civil occupying regime was imposed in the Netherlands, characterized by the strong influence of fanatical Nazis and the SS. They considered the Dutch to be a “Germanic brother nation” and tried to win people over to Nazism. This applied less to the Belgians and certainly not to the French.

Today, the race between Holocaust education and catastrophe and the need to inform is self-evident throughout society, regardless of where we live.

To quote Conference President Gideon Taylor: “Survey after survey, we continue to witness a decline in Holocaust knowledge and awareness. Equally disturbing is the trend towards Holocaust denial and distortion… To address this trend, we must put a greater focus on Holocaust education in our schools globally. If we do not, denial will soon outweigh knowledge, and future generations will have no exposure to the critical lessons of the Holocaust.”

About the Author
Simons is an author, writer and social advocate. He publishes an online international news service, now in its 15th year, dealing with issues relating to intolerance, hate, antisemitism, Islamophobia, conflict, and terrorism, as well as an online community news site. As a diplomat, he served as the Honorary Consul of the Republic of Rwanda to Canada, post-genocide era. He has lectured and designed courses in the areas of therapeutic management, religion in politics, and communications. He recently published his sixth book.
Related Topics
Related Posts
Alan Simons