A new volley has been fired in the ongoing story of the rotten state of the Associated Press’s Jerusalem Bureau. Former AP staffer Matti Friedman has made more explosive revelations, this time in a long, detailed article in the Atlantic.

In today’s ADHD society of 140 character tweets such a long article may challenge a few people but it deserves our complete attention. There are two stand out charges in the piece for me:

Just as before, because these charges are being laid by a former employee now turned whistleblower, they carry a hefty weight. It seems they’re causing a huge upset at the Associated Press.

Following the Atlantic piece, the AP’s media relations director, Paul Colford rushed out a statement and embarked on a furious quest to address “inaccuracies” in Matti’s piece and those who’d amplified the charge about NGO Monitor. He turned his attention to the Jewish Press who, just as we had at Israellycool, focused quickly on the blacklisting of Dr Steinberg:

Colford sent a link to the statement, explaining that he has “addressed the falsehoods” in Friedman’s Atlantic article, including his “bogus claim about AP and Prof. Gerald Steinberg that you have singled out in your article.”

The part of Colford’s official AP statement relevant to the charges concerning NGO Monitor is this:

_ There was no “ban” on using Prof. Gerald Steinberg. He and his NGO Monitor group are cited in at least a half-dozen stories since the 2009 Gaza war.

Upon further questioning, Colford gave nine articles where Steinberg or NGO Monitor are mentioned. After sterling work by blogger Jeff Dunetz and others, tracking down all the articles, Matti’s original point was intact. Back to the Jewish Press:

What Colford did eventually provide was a printout of articles with AP bylines in which Steinberg had been quoted. In all, there were nine articles (in a subsequent email Colford listed another AP article citing Steinberg. That one, dated 2014 and about the NGO GreenPeace, had nothing to do with Israel.)
Of the nine articles in Colford’s printout, two were published before Operation Cast Lead. Of the remaining seven, two were about Iran, one was about Pakistan, and one was about (yet another) new U.S. Mideast peace effort.  Of the remaining three, one was written in 2012 and one was written in 2011. Both of these were harshly critical of Israel, and had nothing to do with Operation Cast Lead.

That leaves one article.

The last one was similarly dismissed. Not only that, another former AP reporter in Jerusalem, Mark Lavie, weighs in to confirm the ban and recount how a quote from Steinberg was removed from an article he wrote in 2009. He then, to my mind, drops an even bigger bombshell:

That editor then told him that AP reporters “can’t interview Steinberg as an expert because he is identified with the right wing.”

So the entire spectrum of “right wing” opinion is not quotable by the AP? Does this not rule out a huge swathe of support for Israel ever being reported by the Associated Press?

Matti Friedman has now reiterated the claims this morning with a Facebook post (also passing on a link to the Jewish Press):

In responding to me, the AP’s media people seem to be using the Philip Morris Handbook for Amoral Corporate Damage Control – charge “distortions and half-truths” to obscure the fact that you actually have to acknowledge serious errors, throw out some vague numbers to make it all sound scientific, and smear the critic as a publicity hound. But they seem not to have read Clause 73(1a) – Don’t categorically deny something that’s pretty easy to confirm.

Moving on to the second point of unreported media intimidation. One would think that armed men bursting into a newsroom and demanding that news be taken down or otherwise reported differently would, in and of itself be newsworthy.

Especially when someone as important as the New York Times Bureau chief (Jodi Rudoren) specifically denied Hamas harassment in Gaza. She famously tweeted that “Every reporter I’ve met who was in Gaza during war says this Israeli/now FPA narrative of Hamas harassment is nonsense”.

Which, as Mirabelle has pointed out in a detailed post at Israellycool, doesn’t seem to tie up with this from the AP’s statement:

_ In the early days of the war, armed militants entered the AP’s offices in Gaza …  Such intimidation is common in trouble spots. The AP does not report many interactions with militias, armies, thugs or governments. These incidents are part of the challenge of getting out the news — and generally not themselves news.

The story continues to revolve around what the AP will not publish, what they burry from view. As I’ve noted before, the AP does not feed its news directly to the public: they supply stories to news outlets who pay to re-use either edited or un-edited.

There is a deafening silence from the clients of the AP, news outlets like the New York Times, CNN and a myriad of others over where they stand on the charges against the Associated Press’s Jerusalem office. I’d like to hear from every news outlet that runs AP stories on Israel: but I don’t expect the AP will be reporting it any time soon. 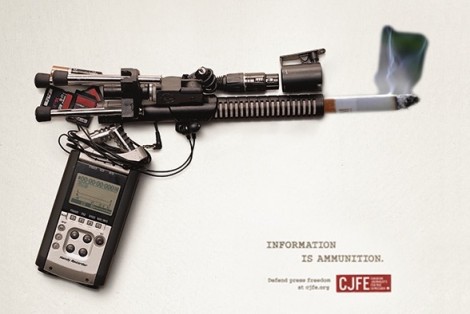 Lethal Journalism – Image created by Brian of London reusing an image from Canadian Journalists for Free Expression
About the Author
Brian of London made aliyah from the UK to Israel in 2009. For many years he has blogged and broadcast about Israel, technology and other subjects. Most recently he's focused on the experience of driving an electric car every day. Brian has a scientific PhD but today owns a business in Israel.
Comments