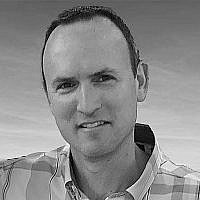 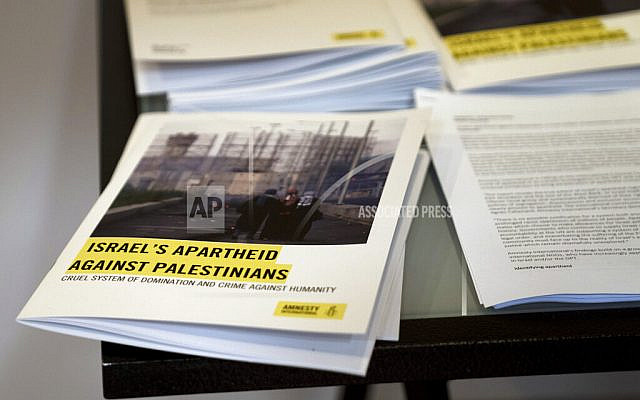 Copies of Amnesty International's report "Israel's Apartheid Against Palestinians," are available for journalists at a press conference in Jerusalem, Tuesday, Feb. 1, 2022. The London-based rights group said Tuesday that Israel has maintained "a system of oppression and domination" over the Palestinians going all the way back to its establishment in 1948, one that meets the international definition of apartheid. (AP Photo/Maya Alleruzzo)

Between January 2021 and February 2022, three NGOs, B’Tselem, Human Rights Watch (HRW) and Amnesty International (Amnesty), released reports accusing Israel of committing crimes of apartheid, effectively being an apartheid state. The three reports issued within about a one year period was part of a coordinated legal assault to delegitimize Israel – most likely in response to major setbacks to the anti-Israel community, such as the Abraham Accords that shattered the myth of Arab isolationism of Israel until the Palestinian issue was resolved. Each report makes essentially the same claim: Israel is a Jewish supremacist regime which discriminates and oppresses Palestinians simply because of who they are, and for no other reason. Palestinians are considered a unique “racial group” as detailed in the HRW and Amnesty reports. HRW explains in its section defining apartheid: “While it is beyond the scope of this report to analyze the group identities of Jewish Israelis or Palestinians, it is clear that in the local context, Jewish Israelis and Palestinians are regarded as separate identity groups that fall within the broad understanding of ‘racial group’ under international human rights law.” Amnesty concludes that: “the State of Israel considers and treats Palestinians as an inferior non-Jewish racial group.”

Importantly, the apartheid thesis by all three NGOs relies on defining 100% of Arabs in the combined territory of Israel, the West Bank and Gaza as “Palestinian.” This necessarily means the complete erasure of all Arab-Israeli identity. This point is crucial, as the presence of two distinct groups of Arabs in this combined territory – Palestinians and Arab-Israelis – would shatter the neat apartheid construct pitting the Jewish supremacist Israeli regime against Palestinians, simply because of “race.”  If the reality is acknowledged, which is that: (a) 2 million Arab-Israelis with Israeli citizenship live democratically inside Israel with full rights and participation in the highest levels of society from Supreme Court justices to equal representation in the leading schools like the Technion (acknowledging the presence of racism and need for vast improvement in the Arab sector); and (b) Arab citizens of Israel have evolved into a distinct group that by a sizable majority does not consider themselves Palestinian – then it becomes clear that the long standing conflict between Israel and the Palestinians is not racial, but political and territorial, and the distinction between Israelis and Palestinians living in the West Bank and Gaza is one of citizenship versus non-citizenship.

HRW and Amnesty similarly and incredibly do not write the words “Arab-Israeli” even once in their entire reports in what is clearly an intentional decision by both NGOs. Amnesty’s report was issued after the Arab-Israeli Ra’am party led by Mansour Abbas joined the ruling coalition government for the first time in history, yet in a report on Israeli apartheid inside Israel, Amnesty decided that this event was not worth mentioning, let alone analyzing. A statement by Mr. Abbas explaining that he rejects the word “apartheid” to describe the relations between Jews and Arabs was not cited either.[iii]

It is clear that the apartheid reports issued by these NGOs and endorsed by the anti-Israel community rely on invented definitions of apartheid and a grossly falsified narrative of the Israel-Palestine conflict. The first deliberate falsification, a keystone to the apartheid thesis, begins with the basic construct of the conflict as racially motivated pitting Jews against Palestinians simply because of their identity. The apartheid thesis is a house of cards constructed of fabrications and omissions, beginning with the deliberate erasure of Arab-Israelis and their entire experience inside Israel. This erasure is itself a form of discrimination perpetrated by these self-appointed human rights groups who are in reality political organizations obsessively dedicated to ending Israel as a Jewish state.

[i] https://www.jpost.com/arab-israeli-conflict/only-7-percent-of-israeli-arabs-define-themselves-as-palestinian-625285 refers to 2020 poll which can be found here: http://jppi.org.il/en/article/index2020/

[ii] https://www.972mag.com/poll-israelis-positive-view-jewish-arab-relations/; another poll from 2017 by the NGO S offered four categories to Arabs in Israel to identify themselves, Arab, Palestinian, Israeli or by religion (Muslim, Christian, Druze) – 14.8% chose Palestinians (https://www.shaharit.org.il/survey-of-arab-citizens-of-israel/?lang=en)

About the Author
Salo Aizenberg is an author and writer, having published "Hatemail: Anti-Semitism on Picture Postcards" which was nominated as a finalist for the National Jewish Book Awards, and other insightful articles about the Israel-Palestine conflict. Salo owns and manages Downtown Investment Advisory, an investment firm based in White Plains, NY.
Related Topics
Related Posts