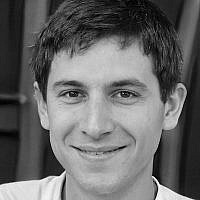 The Blogs
Jonathan Moore
Apply for a Blog
Advertisement
Please note that the posts on The Blogs are contributed by third parties. The opinions, facts and any media content in them are presented solely by the authors, and neither The Times of Israel nor its partners assume any responsibility for them. Please contact us in case of abuse. In case of abuse,
Report this post.

Israel is a rich and vibrant country, with a population that have come from over 80 countries. They have fought wars for survival while they were David and now, they fight as Goliath. When the newly minted Prime Minister, Naftali Bennett, went to New York to speak at the UN there was something missing from his speech, he ignored Palestine, proving that they are the giant that overlooks the weak and oppressed as Goliath once did. I am not the first to write about that glaring gap in his speech. Though I think I am one of the few that wonder now that the 2022 budget has passed, what does he intend to do about it?

It is understandable that there are many social and economic problems in Israel that demands the focus of the current government. The housing crisis and the pay gap are just a few of the problems that plague the country. But one needs to ask who are the people suffering from the pay gap? Who are the people that will build the houses? It is easy for the government and people of Israel to answer by saying the Arabs will build, the Arabs are ones at the bottom of the pay gap. However, where do these Arabs hail from? The Israelis and the government know where, be it consciously or subconsciously, the come from behind the checkpoints, they come from Palestine.

Just recently Bennett denied allegations that he is in the process of making peace with the Palestinians. When he was called to the Knesset to answer these allegations his brief response was “I was asked to respond… Here is my answer: There are no negotiations on establishing a terror state in the heart of the land,” which is an illegitimate response. He has yet to acknowledge the word Palestine, which is what needs to be said.

Palestine’s future is not secure because the Israeli prime minister has refused to utter the word Palestine. However, recently the Defense Minister, Benny Gantz, has said that settler attacks have almost doubled in the past couple of months. Gantz state that the strengthening of the Palestinian Authority (PA) and allowing for economic and civil measures on a level “that has not happened for years” is a policy that is in Israel’s interest, according to the Jerusalem Post. The defense minister has set out to protect Palestinians from Israeli settlers, he wants to strengthen the PA. There is seems to be a cognitive dissonance within the government.

It is a fact that Palestine and Palestinians exist, it is a fact on the ground, and it will not change. The defense ministry has acknowledged the governing party of Palestine, the PA, must have Israel’s backing. Yet Bennett refuses to acknowledge facts on the ground. He continues to deny the existence and control Israel has over the fractured nation. How can he lead a government that denied 98% of Palestinian building permits, according to Haaretz,  and in the same breath transfer a loan of 500 million NIS to the PA all without acknowledging that there is a Palestinian entity?

Will he be a brave leader and finally publicly acknowledge the Palestinian issue like he did with his video years ago? Or will he cower and wait for it to be the problem of the next government and attack from the sidelines, taking credit without responsibility?

Granted, Bennett is managing a weak coalition and he has abandoned his original constituency which led to him having 7 seats in the next election according to reason polling data. It is a safe game he is playing, promising to do nothing, waiting for his mandate to end and when the next prime minister comes into play, he can vote against him. Which will bring down the fragile government and send Israel to elections, again.

The government and all of its agents recognize that Palestine and Palestinians exist. No one is asking to make peace with an opponent, yet to recognize the opponent is essential.

About the Author
An international traveler, with Palestinian roots. Educated in the US and the UK.
Related Topics
Related Posts
Comments