In a rigging election in Iran, appointing Seyed Ebrahim Raisi, known as “the Butcher of Tehran”, or “Executioner 67*, (1988 executions of Iranian political prisoners), was not surprising. And in fact, it can be said that one of the pawns of The Iranian dictator Khamenei’s chess game, pointing him out, has been appointed to another position. 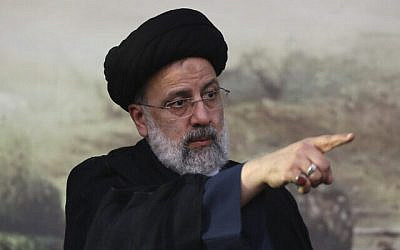 FILE – In this June 6, 2021 file photo, Presidential candidate Ebrahim Raisi, points during a campaign rally in Eslamshahr, southwest of Tehran, Iran. The presidential election on Friday, June 18, is likely to be a coronation for Raisi, a hard-line candidate long cultivated by Supreme Leader Ayatollah Ali Khamenei. (AP Photo/Vahid Salemi, File)

Who is Ebrahim Raisi?

Raisi is among the clerics active in the killing of political prisoners who were given a special mission to execute political opponents after the End of the Iran-Iraq War on the orders of Ayatollah Khomeini. After being ordered by the regime’s then-supreme leader, he quickly stepped in, along with several other clerics, and was ruthlessly unimaginable in less than two months in hanging thousands of political prisoners under the title of Death Board. (One of the most notable points in this inhumane operation is that a large number of political prisoners executed by Raisi and the Death Board were finishing their prison sentences and otherwise buried the bodies of those executed mercilessly in mass groups.) 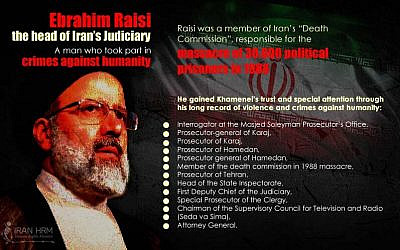 Raisi was a member of the Death Committee, responsible for the mass execution of political prisoners in 1988

The leaders of the Islamic Republic applauded Raisi after the mission, and one year after the death mission, he was appointed to the Tehran Prosecutor’s Office and held the post for five years. Khamenei (the regime’s second supreme leader) has since set Raisi in various positions, including Qods Province and the Country’s Inspection Organization. Until recently was the first deputy of the judiciary and ultimately the head of Iran’s judicial organization.

During these years, he played a prominent role in suppressing the press and detaining and torturing journalists.

Ebrahim Raisi was finally president on June 18, 2021, during an election engineered by the Revolutionary Guards, the Office of the Supreme Leader, and fundamentalist clerics by an unprecedented Iranian people boycott to mark another chapter in the history of the Islamic Republic.

Raisi’s role in the region

Raisi’s rise to office in Iran known as the “Executioner of Tehran” will pave the way for a faster atmosphere in the Middle East, and in other words, coinciding with some other disturbing events in the region could be a sign of the development and continuation of insecurity in the Middle East.

These days, with the withdrawal of U.S. forces from Afghanistan, the Taliban has also intensified its advance on Afghan soil.

According to official Afghan sources, nearly 50 of the 370 total districts in Afghanistan have fallen to the Taliban. The Taliban themselves say they control 80 per cent of Afghanistan’s provinces, and speculation suggests that the violent group will soon control all of Afghanistan.

More interestingly, Taliban attacks have intensified as the tenor of the elections in Iran heats up and Ibrahim Raisi’s rise to power.

A few months ago, Mohammad Javad Zarif, the Foreign Minister of the Islamic Republic regime, hosted a Taliban delegation in Tehran.

According to independent international experts, the Islamic Republic plays a vital role in bringing money and ammunition to terrorist groups, including the Taliban and al-Qaeda and hundreds of unnamed militant groups in Iraq and Syria. 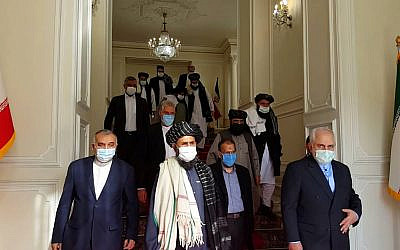 A recent report by U.S. intelligence agencies indicated that most al-Qaeda and Taliban leaders, along with their families, live in climate-savoury areas of the Iranian capital.

Few do not know that the Islamic Republic regime is the financial, weapons and logistics support of subversive groups in the world.

They were terrorist saboteurs who took over Iran four decades ago. They soon realized that to advance their affairs, they had to wear expensive suits instead of war uniforms, to say in international forums.

As stated above, Raisi’s rise to office in Iran, known as the “Executioner of Tehran,” will pave the way for a faster atmosphere in the Middle East.Although many countries are well aware that in Iran, the president has been doing virtually nothing, for several months on the orders of Khamenei, Abbas Araghchi has been acting independently from the government and the Foreign Ministry, which seems to be in the role of facilitator of the dictatorial leader’s orders.

Hassan Rouhani, whom some in the West and free societies mistakenly referred to as a moderate, has at least no listen to the dictatorial system in the ayatollahs’ approach. Raisi, as the new president, will listen to the orders of Iran’s 82-year-old supreme leader. 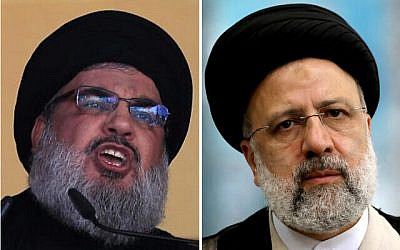 Iran’s foreign and even domestic policy is heavily dependent on the interventions of Khamenei and his relatives in the supreme leader’s office, office, and religious palace.

Khamenei, alongside the IRGC, even interferes in economic matters and imports. In the past few years, when powerful sanctions by the Trump administration had weakened his system, he had ordered the regime’s central bank not to spend a cent of foreign currencies on imports. His decision caused famine for the country’s ranchers. The price of the general interest in poultry, meat and eggs in Iran soaring sharply and long queues for grocery shopping.

Khamenei wanted the remaining dollars in the regime’s foreign exchange reserve fund for more essential tasks, including funding Hamas and terrorist interventionist groups such as Yemen’s Houthis, Hizbollah, Islamic Jihad, the PMU, the Taliban and dozens of other terrorist groups in the region.

This has caused the remaining money in the regime’s reserve fund to be spent not on starving the people but for a new adventure and paying the regime’s mercenaries.

The Essence of the Islamic Republic is evil. 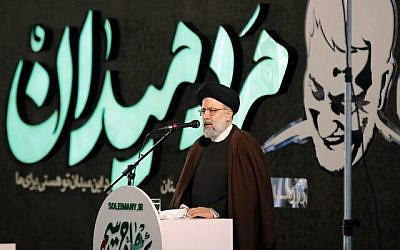 Iranian judiciary chief Ebrahim Raisi speaks during a ceremony on the occasion of the first anniversary of death of former Quds force commander Qasem Soleimani in Tehran, on January 1, 2021. – Raisi warned that Qasem Soleimani’s killers will “not be safe on Earth”, as the Islamic republic began marking the first anniversary of the top general’s assassination in a US strike. (Photo by STR / AFP)

Raisi’s rise to office in the Islamic Republic will encourage the world’s terrorists more than ever before, and he is a person familiar with the maze of executions and killings. As a result, critical pawns of his administration will make it easier to provide relief to weakened terrorist groups. Raisi’s like-minded people in the Islamic Republic have been issuing death sentences and prison sentences for many years. As a result, it is not possible to expect feedback of their behaviour at home to be foreign, even though they have already spent their lives killing Americans and Israelis, even though they have not been spared punishment.

Although there is no doubt that Khamenei and the IRGC control politics and government in Iran, it should not be overlooked that Raisi and his team are inherently interested in engaging with Israel and infiltrating Arab countries, in the new administration, these individuals will be the Supreme Leader’s powerful arm for the development of evil.

It seems that in the current situation, the atmosphere in the Middle East and The Persian Gulf region will move towards greater insecurity and the development of evil with the support of the Islamic Republic government. The Raisi government will spend all the country’s resources equipping terrorist groups instead of Iran’s expansion and development to satisfy the dictatorial leader of the regime. 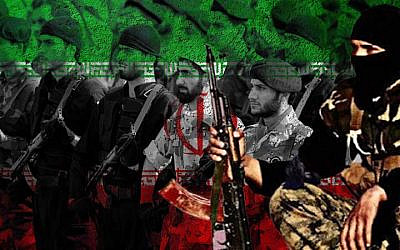 The money-splashing of the Islamic Republic’s leaders for murderous groups is not exclusive to Shia groups. Still, it will also finance al-Qaeda and the Sunni Taliban to expand the fight against murder and terror worldwide.

The Tehran regime’s empty coffers, which are now looking forward to Biden’s grace to lift sanctions, require more money to pay the raging and wages of hundreds of terrorists affiliated with his gruesome murderous organization. But not for Iran’s development and prosperity and the elimination of hunger and deprivation of people, but for the financial recharge of terrorist fighters worldwide who receive their salaries in dollars from the Islamic Republic.

Currently, many terrorist groups and organizations are operating under the mullahs’ rule worldwide, the most important of which are Hamas, Islamic Jihad, Yemen’s Houthis, Lebanon’s Hezbollah, Iraq’s Hezbollah, the Hashd al-Shaabi, the Taliban, Kat. Hizbollah battalions, al-Aqsa battalions, Harakat al-Nujaba, Fatemiyoun Battalion, Zaynab battalions, Asaib al-Haq, Badr Army, Saraya al-Islami, Saraya al-Kharasani, Kataib Sayyid al-Shuhada, etc. Paying them from Iran’s civil and development budget imposes millions of dollars a month on the Iranian economy. At the same time, many provinces in Iran do not have safe drinking water and schools.

I believe that the new president of Islamic regime is in favour with the regime’s nuclear ambitions and its campaign of global terrorism and yet I believe the world would be a safer and better place without the Islamic Republic.