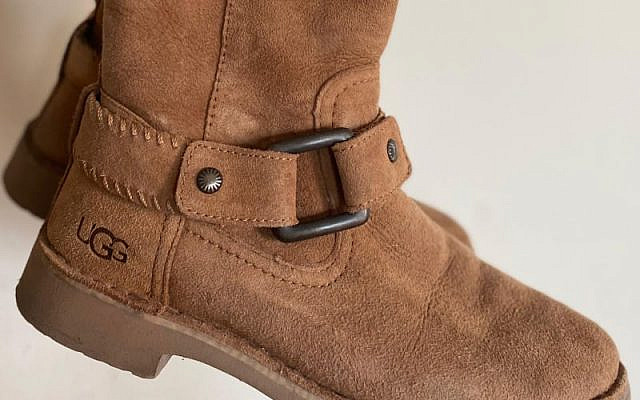 Last year, there was a controversy over whether Uggs brand boots and shoes were “kosher”. Why would there be an issue with clothing and footwear needing to be “kosher”?

A garment that is a mixture of Shaatnez, combined fibers, shall not come upon you.

The prohibition of kilayim (mixture of species) in garments applies only to wool and linen. No other kinds are forbidden to be mixed. Wool is restricted to that of a ewe or a ram.

The same applies to linen and hemp (kanbos, a fibrous plant) hackled together- if the greater part is hemp it may be mixed with wool, since hemp is not classed as linen.

Are shoes subject to the laws of kilayim?

In the Talmud, Beitzah 15a, Rav Papa said: Ardalin, undershoes, are not subject to the laws of kilayim.

Rashi explains that he saw in Tshuvot HaGeonim that Ardalin were placed under the shoes and goat leather was attached beneath them. The section near the heel was sometimes made of wool. According to Rav Papa, even if it also contained linen, it would not be considered kilayim as it was very hard.

Rambam points out that the skin of the heel is very hard and does not warm up the way that the rest of the body warms up. If it doesn’t warm you up, it doesn’t count as kilayim.

Uggs are for sure not Ardalin as they are very soft, not hard and they warm up the foot. So although there was discussion in the Talmud, Rashi, Tur (Yoreh Deah 301) and Rambam about Ardalin, a part of shoe not being susceptible to kilayim, it was definitely not in the Ugg family.

Since shoes traditionally have been leather, this has not come up very much until now.

What did they find to think that Uggs may be a problem?

There were seven styles of Decker’s Brand Uggs and slippers that a Shatnez lab in Lakewood, NJ tested and found to be problematic:

However, according to the lab in Flatbush, Brooklyn, although there was a trace of linen, it was already batel before it was put into the shoe (like we saw in the Mishna above in Kilayim that if the majority is not wool or not linen and is spun together with another fabric it becomes nullified) so there is nothing to worry about. The lab in Williamsburg said that you only have to be concerned about something which has issues in at least 10% of the products that it produces. Seven styles are a drop in the bucket compared to the amount of Uggs footwear that has been produced over the years.

Unless you have one of the seven styles listed, you have nothing to worry about. Even if you have one of those styles you could follow the leniencies of the Flatbush and Williamsburg labs. If you want to be strict, you can get the Uggs tested to see if your pair even has linen or you can choose to stop wearing them.

So the answer is: Most Uggs are kosher as far as the laws of Shaatnez go. If you are uncomfortable wearing products that come from animals, then that is a whole other story.