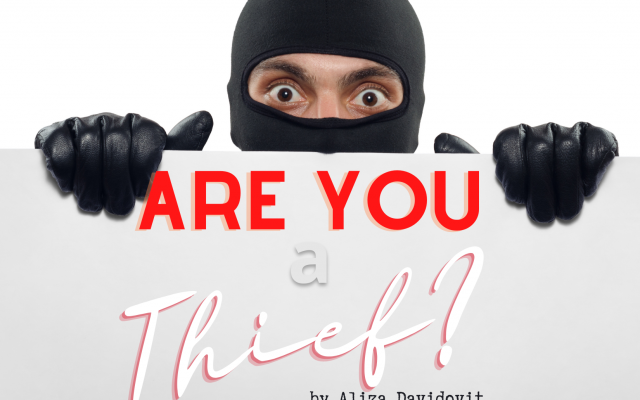 President Richard Nixon made famous the sentence, “I am not a crook.” Yet, each of us could easily claim this sentence as our own mantra since most people think of themselves as decent, honest people, and certainly not as thieves!

We all well know that the Torah commands us not to steal, as do the laws of the land. As such, most people would not walk out of stores with expensive trinkets which they inadvertently slipped into their pockets and for which they “forgot” to pay. But the funny thing is, many of us will pluck a few grapes in the grocery store or grab a few nuts and pop them into our mouths. And the fact is, friends, we are not as honest as we may think we are. Our minor thefts are not benign, nor can they be easily or morally justified. We can’t play politics with G-d.

A deeper look into the Torah commandment of not stealing reveals that this law is much more encompassing than it appears. On the scales of Divine justice, the stolen grapes may tilt the balance painfully against mankind. The Biblical account of Noah teaches us that G-d decided to destroy the world via a flood because “…the earth had become filled with robbery” (Genesis 6:11).

But this robbery wasn’t of the same audacious nature as that of the famous Harry Winston jewelry theft in Paris, where armed robbers disguised as women stole over $90 million of jewels and watches. The Torah is referring to a wrong that is too petty, too small, to be tried in a court of justice … but if committed continuously, these wrongs can gradually ruin and bankrupt your fellow man.

If someone goes to a market and tears off a grape and eats it — not much damage is done. However, the next person then comes along and does the same thing, and so on. It is not long before the bunch of grapes, or nuts or olives are diminished both in appearance and quantity — and the owner really has no one to blame for the theft. Nonetheless, the damage is done and justice is obfuscated. Hence, this is a sin for which the Generation of the Flood was punished. We are commanded to pursue justice, not distort it.

There are those among us who would never sample items before paying for them, after all, the grapes aren’t even washed. But many of us are guilty of obtaining our desires through cunning and manipulation. Well, here is a definition of stealing you may not have considered: When we manipulate another person, we are guilty of stealing his or her clarity of mind, innocence or emotions. This type of behavior is called geneivat ha’daat: “theft of the mind.”

For example, it is prohibited to invite a person for dinner just to look kind and show good will if you know that they will turn you down. It is forbidden to pretend to be interested in buying an item and stealing a salesperson’s time by tricking them into believing you intend to buy it.

The Talmud states that there are seven types of thieves, and the worst is the one who “steals the minds” of people (Tosefta Bava Kama 7:3). It is simply prohibited to imply something that is not true to influence another person’s behavior. As the Rambam taught: “It is forbidden to say one thing with your mouth while believing another thing in your heart.”

Leading someone to believe something that is not true is not only morally wrong and tantamount to stealing, but can also cause a chain of events which can ultimately result in a victim’s death.

Imagine such tragic scenarios as where a heartbroken individual may have given up her precious time and displayed emotional vulnerability because a manipulator dishonestly implied that he would marry her.

Imagine someone who spent his last dollar because a smooth talker implied that the success of whatever it may be was guaranteed.

Imagine putting your well-being into the hands of a schemer who pretends to be competent, be it a doctor, a PR person, a real estate agent, an intern, an employee or an athlete.

The preceding are all considered stealing and are forbidden by Jewish law. When taking the aforementioned into consideration, perhaps most of us are no longer passing the Honesty Test with an A-plus.

Without putting our hands in someone else’s purse or pickpocketing them, we can also steal from another by speaking about them, lashon hara. And in contradistinction to secular libel law, this holds true even if what is said is true.

“Life and death are in the power of the tongue” (Mishlei 18:21). When we speak ill of others, we are essentially killing them and stealing their good name and success by poisoning the many paths they may intend to walk down in life. How can a person have a fair chance to succeed if demeaning and damaging words knock down his/her opportunities even before he or she has a chance to grab for them? What is stolen by ill words can never be recompensed.

Some of us are proud not to be backstabbers and tell people what we think right to their face. But it is also forbidden to demean others. Using words in a hurtful and condescending manner toward another human being steals their dignity and their confidence without which a man is robbed of his ability to face life’s challenges with healthy courage.

Simply put, it is stealing to deny someone their time, dignity, reputation, money, or justice. Even coveting what belongs to another is tantamount to robbery. So know, desiring your neighbor’s car is bad enough under the ever-present eyes of G-d. You don’t have to steal it to be guilty of wrongdoing.

But with Hassidic optimism Reb Zusha says that even thieves can teach us something. In fact, there are seven things which we can learn from them, one of which will help ensure that we stay honest. It is their mindfulness to detail. After all, a good crook doesn’t want to get caught. The biggest heists can take years to plan. If we would guard our behavior with the same attention to detail as they plan their crimes, we would never misbehave on any front, least of all take from another what is rightfully theirs.

As the saying goes dear readers, “In order to live well, you either have to have a clean conscience or no conscience.” Choose wisely.