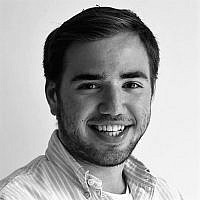 The Blogs
Josh Seitler
Apply for a Blog
Please note that the posts on The Blogs are contributed by third parties. The opinions, facts and any media content in them are presented solely by the authors, and neither The Times of Israel nor its partners assume any responsibility for them. Please contact us in case of abuse. In case of abuse,
Report this post.

Jonathan Arkush’s public suggestion that Jewish students should avoid the London School of Economics (LSE) troubled me as the President of Union of Jewish Students, as a representative on the Board of Deputies, and also as a proud alumnus of LSE.

What happened at LSE this week was appalling. It is unacceptable that the School allowed the events to unfold in the way that they did, with Jewish students being the target of antisemitic abuse. It is even worse that the School ignored the concerns raised by the Jewish Society President on behalf of LSE’s Jewish student population.

We know the result of this lack of care: A supporter of Mr Falk, Gilad Atzmon, made horrifying comments about Jews at the event in the audience. The one that sticks out for me was the statement that ‘Jews were expelled from Germany for misbehaving.’ Undeniably, the concerns of Jewish students at LSE were legitimate and the university failed in its duty to protect Jewish students by allowing him to speak.

Evidently, my issue with Mr Arkush’s Tweet is not about whether or not there are problems for Jewish students at LSE. Indeed, to deny that such problems exist would be a falsehood. However, Mr Arkush does a disservice to the Jewish students currently at LSE, as well as the allies they have made throughout the Students’ Union and in the University itself, who stand up and fight for the welfare of Jewish students on a regular basis. 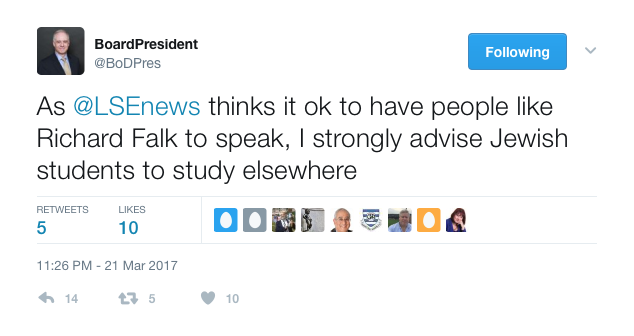 At this point we must draw a distinction between the University and the Students’ Union. Both the LSESU Jewish Society and UJS have a very close relationship with LSE Students’ Union, and to treat them as one and the same is grossly unfair. LSE Students’ Union proudly hosted the first ever Antisemitism Awareness Week on a UK campus in conjunction with the LSE Jewish Society; a week that educated all of LSE’s multidenominational student population about what discrimination against Jews looks like, and how it manifests. The leadership of LSESU regularly attend Jewish Society events and have often popped in to say hello and remind Jewish students that they are there to listen to and address any concerns they may have. This is not the behaviour of hostile peers, but rather it is that of friends and allies.

These close relationships did not come about by chance or by luck; they are the result of many years of hard work by successive Jewish Society and Israel Society Presidents, along with a multitude of other Jewish students, working together to build productive, mutually beneficial and genuine friendships.

On the contrary, as last week’s events have shown, the university itself – distinct from the Students’ Union – is less supportive to Jewish students. Over the years there have been challenges for Jewish students at LSE, from societies hosting individuals that glorify terrorism, to placing impregnable obstacles in the way of hosting certain pro-Israel speakers. LSE as a university certainly has some questions to answer when it comes to how seriously they take the safety of Jewish students.

The president of the Union of Jewish Students’ response to the BoD chief’s suggestion.

For Jewish students to run away from LSE, as Mr Arkush suggested, would be to accept silence in response to those crucial questions. It would mean throwing away the close relationships that the Jewish Society, UJS and all of LSE’s Jewish students currently treasure, with people who consistently listen to and support Jewish students. Most importantly, it would also end all chances of working to build similar relationships with the university itself. Professionally as the President of UJS, and personally as a graduate of LSE and ex-Israel Society President of that same institution’s Student’s Union, I believe that would be a grave mistake.

University becomes a home for many students, especially for those who have moved away from home to study. You wouldn’t invite someone who treated your children with disrespect into your home, and you certainly wouldn’t ignore your children when they protested. Likewise, LSE has a duty of care to their students; we must recognise that only by staying at the university and making our concerns heard, loud and clear, can we ensure this is fulfilled.

I know that I don’t speak only for myself when I say that Jewish alumni of LSE are proud of their institution. We have always been a key part of campus life, winning awards both in academia and for contributions to student life. We run in elections to represent our Jewish and non-Jewish peers on campus, and three years ago, Jay Stoll, a Jewish student, was elected General Secretary of the LSE Students’ Union. LSE without its Jewish students would be a very different place, and unlike Mr Arkush, it is not a vision I want to see enacted.

I spent my three years at LSE wearing my Kippa proudly, and I gladly engaged in conversation surrounding Judaism or Israel. This doesn’t mean that Jewish students always feel entirely comfortable at LSE; there are challenges for Jewish students at LSE as at other universities. However, these are best addressed by staying in the room and fighting. To imply that LSE is so hostile to Jewish students that they cannot study there ignores all the fantastic work that Jewish students have done – and will continue to do – at LSE, both in their J-Socs and beyond.