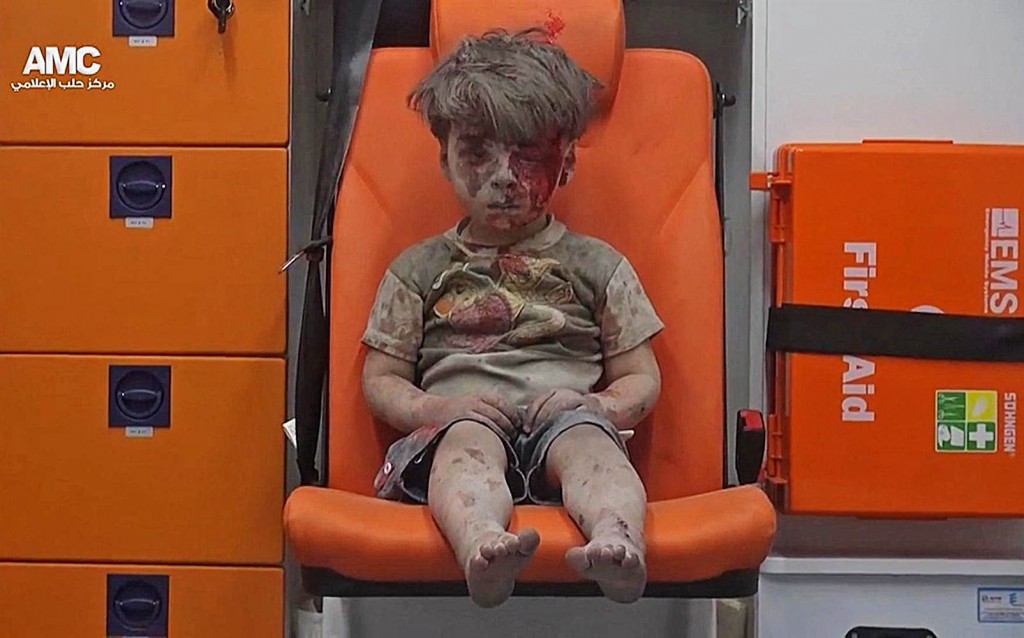 Aleppo’s Children: Omran Daqneesh Is One of Thousands Suffering

On October 6, 2016, Staffan de Mistura, the UN’s Special Envoy for Syria, offered to physically accompany 900 al-Nusra Syrian rebel group fighters out of east Aleppo, pleading emotionally before them to leave in a bid to prevent more civilian bloodshed. The UN estimates the number of civilians trapped in the area at around 275,000 people, 100,000 of whom are children.

And in the face of such devastating atrocities in Syria, which seem to only go in the direction of further escalation by the day if not by the hour, the October 6th New York Times’ editorial is dedicated to the most pressing issue in the Middle East today, which is … yes, you guessed correctly: Israel and “the building of new settlements”. The case in question, in accordance with a statement made by Israel’s Ministry of Foreign Affairs, pertains to “98 housing units which will be built on state land in an existing community and are intended to provide a housing solution for residents who will be evacuated from their homes in accordance with a demolition order issued by Israel’s High Court of Justice”. In its proposal to deal with the issue, the Times goes as far as arguing that “The best idea … would be to have the United Nations Security Council, in an official resolution, lay down guidelines for a peace agreement” between Israel and the Palestinians.

Dogma is defined as “a belief or set of beliefs, sometimes religious, accepted by members of a group without being questioned or doubted”. Dogmatic thinking is one of the greatest risks any policy maker faces, holding on to a set of beliefs without acknowledging a need to examine those every once in a while and adjust them to changing realities (speaking of the turmoil which is the Middle East today). The New York Times chooses to continuously focus on “settlements” as if its the ONLY obstacle to peace between Israel and the Palestinians, thus putting the onus on Israel alone, as if peace is a unilateral step entirely in the hands of the Jewish state. Israel has repeatedly expressed its desire for peace, and declares time and again it is “committed to a solution of two states for two peoples”. In the 1970s, it was the late “right wing” Prime Minister Begin who evacuated Israelis from the Sinai for peace with Egypt. Only a decade ago it was the late “militaristic right wing” Prime Minister Ariel Sharon who evacuated Israelis from several communities in the West Bank and the entire Gaza Strip, in the hope the move will encourage Palestinians to “think positively” about building their own entity rather than devoting all of their energy to the futility of attempting to annihilating Israel. Israel didn’t just promise to make painful concessions. It did!

For over 20 years, since the signing of the Oslo Accords, the international community has focused on the issue of “settlements” rather than focus on settling peace in the hearts and minds of the people in the region and ending incitement in Palestinian society. The result of this dogmatic thinking and criminal negligence is the emergence of new generations of Palestinians, born after the signing of the accords in 1993, who choose to wield guns and knives against innocent Israelis. It is hatred that was allowed to flourish as the eyes of the world were focused on the decoy issue of “settlements”. We know that the only path for change is through education, which might take time, but every day we wait to deal seriously with the issue is a day too late. We have already lost too much time and forfeited too many lives.

Moreover, and this is the worst part of the New York Times’ assumption: their idea that peace can be coerced on the parties or dictated by the powers that be. Peace will not come through the United Nations in New York, nor will it emerge from the green pastures of Europe. The only path to peace goes through Jerusalem and Ramallah. Only direct negotiations between the parties will yield the anticipated and hoped result of a long term, stable and sustainable regional agreement. The role of the international community is to contribute positively to the process and not to deepen animosity between Israelis and Palestinians. Only when Palestinians realize that direct negotiations is the only path, will they be encouraged to go back to the negotiating table. As long as the international community and the New York Times give them false hopes that peace can be achieved without Israel, Palestinians will only dig their feet deeper in the sand, and the farther away the dream of peace will be.