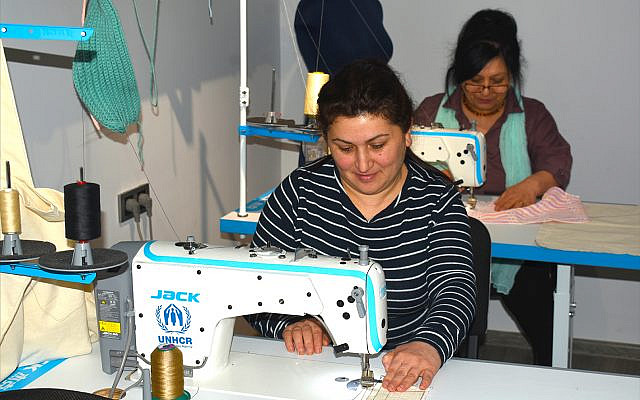 Women displaced by Armenia's most recent war with Azerbaijan sew traditional embroidery at the Resource Center for Women's Empowerment, an NGO in Hrazdan, Armenia. (Photo by Larry Luxner)

HRAZDAN, Armenia — On the ground floor of a nondescript apartment building on the edge of Hrazdan—an industrial town 45 kilometers northeast of Armenia’s capital, Yerevan—some 200 displaced women are regaining their economic dignity, one stitch at a time.

Women like Qarajyan Haykuhi, 30, who grabbed her 2-year-old son from his cradle and fled their village of Matakhis when war broke out in 2020 between Armenia and Azerbaijan. She lives on the money her husband sends back from his job in Russia. Or Liana Khachatryan, 44, a mother of five who fled her village of Talish with virtually nothing.

Qarajyan and Liana spend their days at the Hrazdan Resource Center for Women’s Empowerment, a non-governmental organization established in 2019 by Nare Hayrapetyan. There, they learn to sew traditional Marash embroidery, a type of needlepoint that was almost killed off by the Armenian Genocide of 1915 but which is still practiced by Armenian women throughout the diaspora.

The NGO began life as a refuge for battered women and victims of domestic abuse, a serious issue in Armenia. 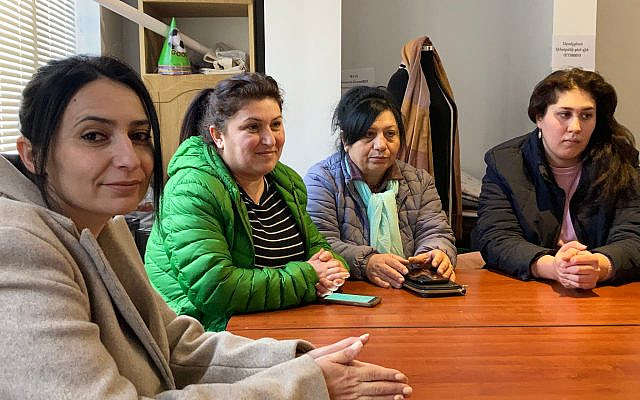 From left: Aruna Poghosyan, Liana Khachatryan, Mileta Hayrapetyan and Haykuhi Karajyan share their stories of war and displacement at the Resource Center for Women’s Empowerment, an NGO located in Hrazdan, Armenia. (Photo by Larry Luxner)

“We offer free psychological, social and legal support to the victims of domestic violence,” Nare told me over hot tea on a frigid morning several weeks ago. “It’s a big problem because our law is not a good one. It needs many changes. For example, if someone is a victim of domestic violence, she can be dragged from court to court for years until she can prove it. Meanwhile, her child can stay with the aggressor.”

For two years, that’s all Nare’s NGO dealt with, she said. “We didn’t intend to extend our focus, but then, when the war broke out with Azerbaijan, and we couldn’t just stand by. So we started this support project for displaced persons from Artsakh.” 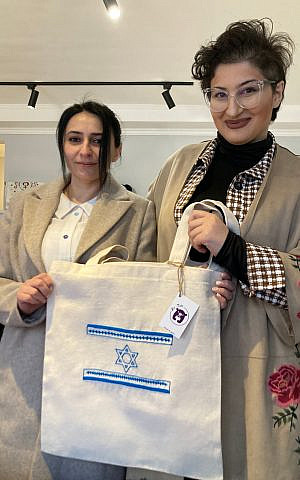 By Artsakh, Nare means the Republic of Artsakh, formerly the Nagorno-Karabakh Republic—a breakaway state in the South Caucasus whose territory is internationally recognized as part of Azerbaijan.

Slightly more than half the size of another disputed territory—the Israeli-occupied West Bank—Artsakh witnessed fierce fighting during a 44-day war in late 2020 between Armenia and Azerbaijan that displaced an estimated 90,000 inhabitants, 88% of them women and children.

Unfortunately, the war strained Armenia’s relations with Israel, a major supplier of drones and other weaponry to Azerbaijan that led to Armenia’s defeat in the war. Relations had already been sour because of the Jewish state’s reluctance to condemn the Ottoman massacre of 1.5 million Armenians during World War I as a genocide. 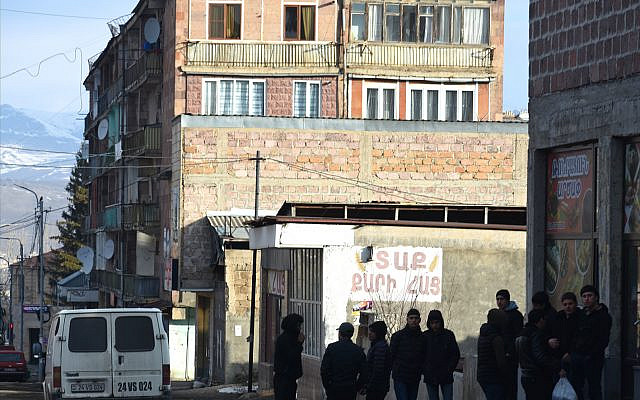 Downtown Hrazdan, an Armenian city 45 kilometers northeast of Yerevan that’s home to the Resource Center for Women’s Empowerment, an NGO that helps displaced and battered women. (Photo by Larry Luxner)

Around 36,000 displaced people from the fighting still reside in neighboring Armenia, most of them in desperate condition, according to the UN’s Geneva-based International Organization for Migration (IOM).

Over time, more than 3,000 families from Artsakh were resettled in the Kotayq region, whose main city is Hzradan, where it seems every other apartment building bears the painted likeness of of fallen soldiers from the latest war.

“After the war, we started to think about some solid projects, how to help these people stand on their own feet and generate income,” she said. “In the beginning, it was self-funded, and from time to time, we get some sponsors.”

To that end, Nare’s NGO acquired eight sewing machines, all of them donated from the United Nations Refugee Agency (also known as UNHCR). The machines cost anywhere from $500 to $2,000 each, and women come to the center to take three-month sewing courses. 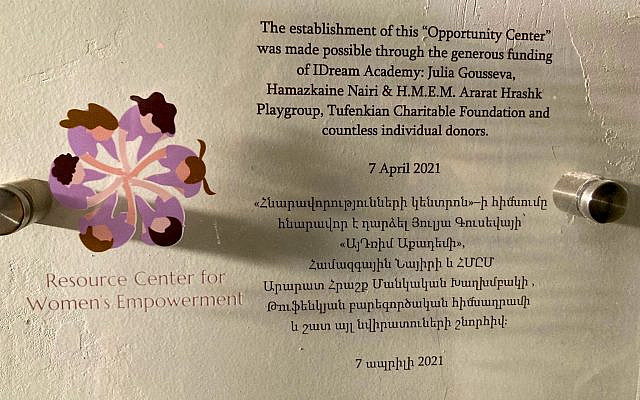 Bilingual dedication plaque graces the entrance to the Resource Center for Women’s Empowerment in Hrazdan, Armenia. (Photo by Larry Luxner)

During the course, they learn about fabric types and get trained in sewing, the initial design of skirts and shirts, modeling, and designing eco-friendly, fair trade-certified tote bags for sale to socially conscious buyers among Armenia’s overseas diaspora; local sales are promoted via Facebook.

‘A place for sewing … and sharing our pain’

Aruna Poghosyan, 35, was a history and geography teacher from the village of Qyuratagh, in the region of Hadrut. A single mother, she took advantage of a three-year scholarship offered by the Ministry of Education to teach at a secondary school near the border with Azerbaijan. The village, home to only 12 families, had no infrastructure and no transportation.

“I liked my profession very much and I always taught my students to be real patriots. With them, we visited all of Artsakh, but I always had a feeling inside that I’d never have another chance,” said Aruna, speaking through an interpreter. “Now I’m nostalgic just looking at the photos, because it’s the only thing I have.”

Two years into her contract, she and her son were awakened early one morning by gunfire.

“I understood that the war had broken out,” Aruna said. “I called my brother, who was an officer in the military. I was lost. I didn’t know what to do with the kids. So I escaped to the forest with 22 kids and one rifle. We wandered in the forest for three days until a car reached us from Yerevan. A bus brought me to Hrazdan. I’ve been here ever since.” 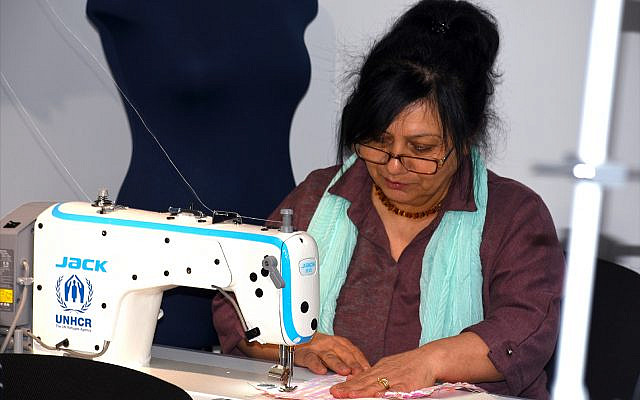 A woman displaced by Armenia’s most recent war with Azerbaijan sews traditional embroidery at the Resource Center for Women’s Empowerment, an NGO in Hrazdan, Armenia. (Photo by Larry Luxner)

She added: “With Nare’s help, I started learning Marash embroidery and sewing. I’m very happy for this because I’m starting up my own business.”

Another woman, Milleta Hayrapetyan, 53, was working in a military unit when the fighting began.

“I was making and serving meals. I hugged the soldiers because I sensed that I’d never see many of them again,” she recalled with tears. “I went to the basement of a school to take shelter. My son and husband brought me here, then went back to the front to fight.”

Milleta spends three to four hours a day with her friends at the Hrazan center—embroidering, learning new skills and reminiscing about the past.

“This community helps us to overcome many difficulties,” she said. “It’s not only a place for sewing, but also to share our pain.”