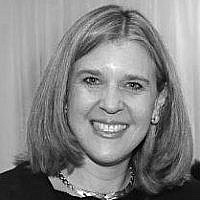 The Blogs
Minna Felig
Apply for a Blog
Please note that the posts on The Blogs are contributed by third parties. The opinions, facts and any media content in them are presented solely by the authors, and neither The Times of Israel nor its partners assume any responsibility for them. Please contact us in case of abuse. In case of abuse,
Report this post.

I’ve wanted to write this blog since last November, when my second son and the lone soldier who lives with us were both drafted into the IDF, joining our older son in “kravi” fighter units. I wanted to write about the craziness that overwhelms our home every Friday, and especially those Fridays when all three come home. From the moment the first soldier steps through the door — leaving the huge knapsack in the middle of the entryway and running upstairs to nab the washing machine before the others arrive — the party doesn’t stop. Pretty soon the other two soldiers arrive with their bags laden with laundry. And then the friends start dropping by, each back from an army unit, each armed with meat to grill for a midday barbecue. On those Fridays by three o’clock our backyard is host to a group of 18-20-year-olds feasting and joking and telling army stories, as I stand in the kitchen watching and cooking for Shabbat.

I wanted to write about the wonderful whirlwind that comes with being an Army Mom. But instead, I begin my blog disclosing the havoc that I experienced this week as an Army Mom attending her first army funeral for a soldier from the Paratrooper unit who was drafted with my younger son, shared a room during basic training, and continued with him to the Commanders course.

Since the beginning of the “Protective Edge” operation by the IDF, I have worried about my sons. As soon as the ground operations began, both were sent to the front lines – the area called “Otef Azza” buttressing the Gaza border, or inside Gaza itself. I didn’t know exactly where they were since their telephones were taken away and I had no means to communicate. I read every news report, every Facebook post, every WhatsApp message for clues to where my sons were and whether they were safe. For a while, I fantasized that they were safe if they were “only” on the border and not actually inside Gaza. I waited for reports of tragedies, knowing that if I had not heard personally it meant that my sons were safe. After a week I found out that my older son was inside Gaza while the younger one was on the border. A few days later, I found out that this war doesn’t stop at the Gaza border when my younger son’s good friend and four others were killed by terrorists who infiltrated through tunnels to Israel’s side of the border.

I didn’t understand when we got the text from our son at 7:00 p.m. saying, “don’t worry, I’m o.k.” Only the next morning, when I heard that four soldiers from the Commanders Course were killed in an incursion the day before at 6:00 p.m, did I realize what he was referring to. A few minutes later, the Paratrooper parents’ WhatsApp group reported the loss of one of our own from unit 101. What could I do? Where should I turn? I went on to the Facebook page of the soldier who was killed and saw pictures of a boy, any boy, riding his motorbike, jumping off a cliff, sitting with his girlfriend. Then I saw pictures from the army, soldiers smiling and goofing around together, pictures with my son. They were boys being boys.

Somehow, this boy whom I had met only once at the Paratrooper’s beret ceremony had now become somebody who was close to me and I needed to go to his funeral. I needed to make the two hour drive each way just to be there, to be with the family, to show my support, to cry with them.

It’s hard to explain the feeling of being at a funeral for someone I really didn’t know, to hear eulogies for a boy I never talked to, and yet to feel that they could have easily applied to my own son. The senior army officer spoke about the young soldier as a leader who never gave up, who was motivated and motivated others. His brother spoke about how he trained in high school with the hopes of becoming a paratrooper, and how proud he was when he was accepted to the training and then to the Commanders course. His friends regaled his always being the center of the group, how his house was always the meeting place when they returned for weekends, and that by the time he’d gotten off the bus from the base they’d already set up a time to meet. And his mother spoke about his words, his laugh, his inner beliefs, to which he stood true. She spoke to all the soldiers who were present, as well as the parents of those who were in combat, and said please take care of yourselves and stay safe.

I worry for my own soldiers, but I am also proud. My goofy teenagers have become men, leaders, heroes. They joined their units in order to give what they could to the country they love. Sure, they competed with friends to get into the most elite units, to get the most dangerous assignments, to beat out their opponents at anything and everything. That’s what high school kids do, they compete. But when it came down to reality, they dealt with any disappointments as adults. Even if they didn’t get their first choice units, they vowed to be the best soldiers that they could be and to serve their country in whatever way their country determines they are needed. They reasoned that a better opportunity may come along to lead from a slightly less prestigious place perhaps they would be more likely to become commanders and officers and have the opportunity to influence younger soldiers. It sounds heady, it sounds surreal, it doesn’t sound like my kids, or like boys being boys on facebook.

I watch from the side with no words to offer, because I cannot relate to their experience. I stand in awe of their courage and determination ready to help, ready to feed, baking cookies, doing laundry, not saying a word, just watching and praying that they will be safe.

About the Author
Minna Ferziger Felig is a lawyer and business professional and a co-founder of the legal recruitment agency Machshavot Smartjob. Most importantly, she is the mother of four children and of an adopted lone soldier.
Related Topics
Related Posts
Comments