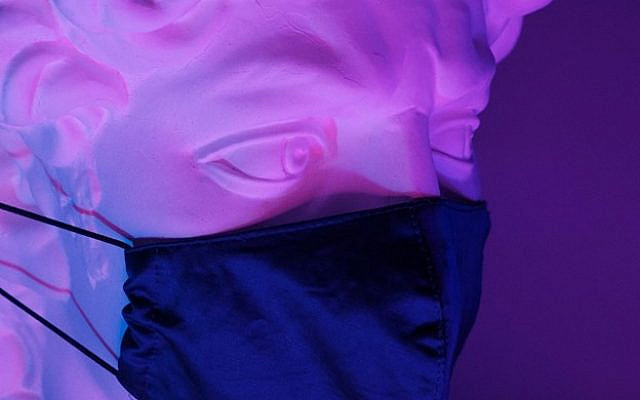 Sculpture of Apollo with a facemask. Photograph by Alena Shekhovtcova.

In 2020, I wrote about the persistence of art amidst COVID-19, and how creatives were proving themselves to be crucial in keeping people together during a time of social distancing. Now that we’re coming up on a full year of life under COVID-19, it’s time to revisit the subject and see how art has been able to flourish.

It’s tempting to dwell on the darker headlines out there. According to Americans for the Arts, the economic impact of COVID-19 on the U.S. arts and culture sector is roughly 14.8 billion — and that’s just considering nonprofit institutions. Canceled events, layoffs, furloughs, and hiring freezes are nearly universal across the industry. Brookings broke it down further and discovered that the hardest-hit creative industries have been the fine and performing arts: dance, music, theater, and visual arts.

But bright spots are starting to show. Take Times Square. On March 12th, hundreds of members of the theater community came together for We Will Be Back, a pop-up performance commemorating Broadway’s lost year and celebrating its impending return. Produced by theater stalwarts Holly-Anne Devlin and Blake Ross, the event’s sense of optimism captures the spirit of 2021. If last year was marked by shutdowns, this one will be characterized by reopenings. The COVID-19 Relief Act of 2021 also earmarks $470 million dollars for the arts. Things are looking — if not precisely good, then at least better.

There’s another side to this story, however, one of resilience and optimism. People have come together to support their favorite artists, venues, and organizations through a historic fundraising push. Smaller venues have been able to reach new audiences on par with heavyweights due to the internet providing a more level playing field. Most importantly, with a pivot to online venues for art consumption and a concerted effort in the U.S. to close the digital divide, art is more accessible than ever.

“The fun thing about having a digital event is that people can just join,” says author Genevieve Hudson. Geographic distance, admission fees, parking hassles, venue limits — all of the traditional obstacles are gone, and audiences have both grown and diversified as a result. Debut novelist Aggie Blum Thompson notes that it’s certainly strange to have the traditional avenues for a book tour closed to her. But the new avenues more than makeup for it: “the virtual book-world is on fire with events and readings. The support has been unbelievable across the board, from publishers to librarians to independent bookstores to all the wonderful readers who make it all possible.”

The cultural scene has also become more inclusive, for both audiences and artists alike. Everyday Americans facing unprecedented swathes of free time have found themselves becoming artists, bringing new perspectives and experiences into the field. Earlier this year, an art gallery in Pennsylvania opened digitally with a show entitled “What I Did in Quarantine.” Pieces ranged from first-time knitters’ projects to oil paintings from people who finally found time to indulge in their hobby.

Furthermore, as much as COVID-19 has devastated the economy, it has not dented the public’s desire to help, both through general fundraising and resources to keep artists afloat. WME partner Richard Weitz regularly hosts star-studded Zoom calls that have become a fundraising powerhouse, with over $1 million raised for COVID-19 charities, $700,000 raised for Center Theater Group, and more. Beyond the big names, there has also been a spotlight on smaller establishments: local galleries, independent bookstores, and small concert venues. Not only are neighbors consciously choosing to support their local institutions, there’s also been a general uptick in interest in the arts, as people cast about for activities to do at home.

Geographic distance, admission fees, parking hassles, venue limits—all of the traditional obstacles are gone, and audiences have both grown and diversified as a result.

Maybe you’ve held a virtual movie marathon with friends using Netflix Party. Maybe you’ve followed an art streamer on Twitch. Maybe you’ve picked up an old guitar and given YouTube tutorials a try. In doing so, you’ve contributed to the evolution and expansion of art.

These changes have brought the industry forward, and there’s no going back. When public life resumes completely, you can expect events to adopt a hybrid model allowing both live audiences and online viewers. You can expect new fans and new artists in almost every genre. And you can expect a renewed respect for the arts, now that people have seen exactly how necessary they are.

Normalcy is on the horizon. With the U.S. averaging 3 million vaccinations a day and cases dropping to the lowest rate since October, we’ve already seen some limited reopenings such as museums and pop-up theater.  Life is Beautiful, the first post-pandemic music festival in the western U.S., sold out in record time. Not only will the arts return, but they’ll be better than ever thanks to the strides we’ve made in the digital sphere.

About the Author
Annette Blum is an activist and philanthropist with a focus on global citizenship. Using art and media as dialogue-generating platforms, Ms. Blum advocates for social justice causes across the globe, and sponsors diverse advocacy-based programs. Among many board and advisory positions, Ms. Blum is a member of the Artists and Educators Board at Center Theater Group, the Clinton Global Initiative, and Religions for Peace, a U.N. affiliate program. Recently, Ms. Blum has collaborated with the Jerusalem Season of Culture program, the Clinton Global Initiative, and is a contributing writer for The Huffington Post, where she shares her experience with social and political programs and events taking place across the globe, with her specific focus on the intersection of art, advocacy and dialogue.
Related Topics
Related Posts
Comments