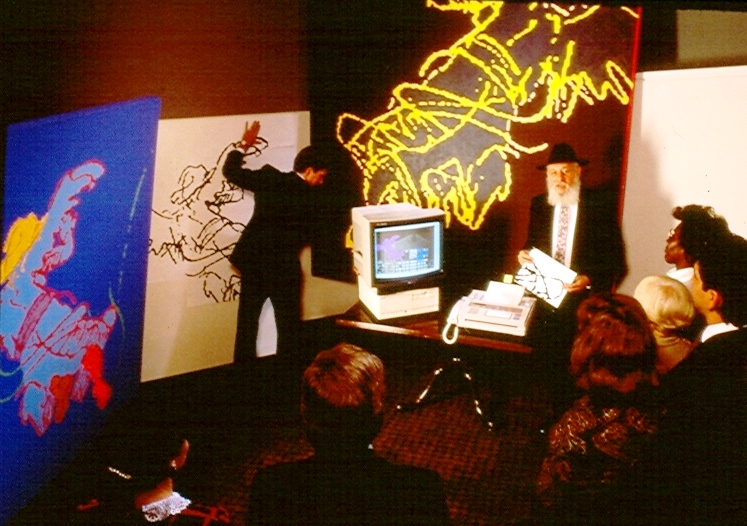 This blog post is the first of a series in The Times of Israel that explores my thoughts and experiences at the interface between art in a postdigital age, Zionism as the national liberation movement of the Jewish people, and multiple identities as an American-born Israeli artist,

The AT&T Annual Report photo above shows me sending a digitized Rembrandt angel on a circumglobal flight via communications satellites from New York to Amsterdam to Jerusalem to Tokyo to Los Angeles, returning to New York in five hours after having flown into tomorrow and back into yesterday.

“Art, Zionism, and Identity in a Networked World” was first published in Hebrew in Zipora: Journal of Education and Contemporary Art and Design. I wrote about the conceptual background for this series in my books: The Future of Art in a Postdigital Age: From Hellenistic to Hebraic Consciousness (Intellect Books/University of Chicago Press), Photograph God: Creating a Spiritual Blog of Your Life (CreateSpace), and in Hebrew Dialogic Art in a Digital World: Four Essays on Judaism and Contemporary Art.

Renew the old and sanctify the new

The great biblical miracle of liberating one nation of thousands from enslavement in the one country of Egypt after hundreds of years of exile pales in comparison with the Zionist miracle in our time of liberating millions of Jews from persecution, pogroms, and the Holocaust in scores of countries after thousands of years of exile and bringing them home to Israel. Choosing to be an integral part of this Zionist miracle, unprecedented in world history, offers me enthralling creative opportunities as an artist.

I draw inspiration from the Zionist challenge of Rabbi Abraham Isaac Kook to “renew the old and sanctify the new” as I explore the vibrant interface between the structure of Jewish consciousness, the realization of the Zionist dream in the State of Israel, and new directions in art emerging from postdigital creativity in a networked world. The wellsprings of my Zionism flow from my Jewish roots and values while the form and content of my art emerge from Jewish thought and experience in a networked world in which art, science, technology, and culture address each other.

As an artist born and educated in the United States, I chose to leave a country that I love and that gave me wonderful professional opportunities to be part of the Zionist enterprise that permits me to be more fully immersed at the center of Jewish life. Zionism seeks to ensure the future and distinctiveness of the Jewish people by fostering Jewish spiritual and cultural values in its historic homeland (World Zionist Organization, Jerusalem Program, 2004). As a Zionist artist I strive to create both an intimate dialogue with the Jewish people and a lively conversation with people throughout the world.

Art crossing over into a new reality

The biblical story of the Jewish people begins with the journey of Abraham as he crosses over from his all too familiar past to see a fresh vision of a future in a new land. Indeed, Abraham is called a Hebrew (Ivri) – one who crosses over into a new reality. Abraham is told: “Go for yourself from your land, from your birthplace, and from your father’s house to the land that I will show you.” (Genesis 12:1) This passage can also be read as: “Walk with your authentic self away from all the familiar and comfortable places that limit vision to a land where you can freely see.” Here, the dynamic Hebraic mindset is established as new ways of seeing emerge from the integration of our journey to the Land of Israel with our inner quest for spiritual significance.

The personal power of Abraham to leave an obsolete past behind and to cross conceptual boundaries into an unknown future presents a powerful message to me as a Zionist artist living in a democratic Jewish State in a postdigital age.  Today in Israel and at the leading edge of technologically advanced societies worldwide, we are beginning to cross over from the digital culture of the Information Age to a Conceptual Age in which people in all walks of life will succeed most when they behave like artists who integrate left-brain with right-brain thinking.  Industrial Age factory workers and Information Age knowledge workers are being superseded by Conceptual Age creators and empathizers who integrate high tech abilities with high touch and high concept abilities of aesthetic and spiritual significance.

Subverting idolatry with a twist of irony has been the mission of the Jews from their very beginning.  As a prelude to the biblical story of Abraham beginning his journey away from his father’s world to the Land of Israel, the Midrash tells that Abraham was minding his father’s idol shop when he took a stick and smashed the merchandise to bits.  He left only the largest idol untouched placing the stick in its hand.  When his father returned, his shock at seeing the scene of devastation grew into fury as he demanded an explanation from his son.  Abraham explained how the largest idol had broken all the other idols.  He could have smashed all the idols without saving one on which to place the blame.  An idol smashing idols gives us clues for creating art to debunk art, art that aims to undermine undue reverence for art, art that challenges the established canon of Western art.

I am interested in creating art to knock art off its pedestal by displaying a creative skepticism not just towards art’s subjects but also towards its purposes.  In his book Fixing the World: Jewish American Painters in the Twentieth Century, Ori Z. Soltes, professor of art and theology at Georgetown University, comments on my series of Digitized Homage to Rembrandt paintings, photomontages, computer-generated etchings, serigraphs, lithographs, and telecommunications events: “Alexenberg appropriates an iconic image from the Christian art tradition: Rembrandt’s angel, who wrestles with Jacob.  But he transforms and distorts it, digitalizing and dismembering it, transforming the normative Western tradition within which he works as he rebels against it.”  My painting is the cover image of Soltes’ book.

Art emerging from Hebraic rather than Hellenistic consciousness

As a Zionist artist, I am joining artists worldwide in liberating art from Hellenistic dominance since its revival in the Renaissance.  The 20th century was a century of modernism that aimed to undermine the Hellenistic definition of art.  The 21st century invites a redefinition of art derived from the Hebraic roots of Western culture rather than its Hellenistic roots. Winston Churchill writes in his History of the Second World War:

“The Greeks and the Jews are the two peoples whose worldviews have most influenced the way we think and act.  Each of them from angles so different has left us with the inheritance of its genius and wisdom.  No two cities have counted more with Mankind than Athens and Jerusalem.  Their messages in religion, philosophy, and art have been the main guiding light in modern faith and culture.”

More than three thousand years ago, King David moved the capital of ancient Israel from Hebron to Jerusalem.  Five centuries later during the Golden Age of Athens, the major temples of the Acropolis were built under the leadership of Pericles.  In my MERIWIP: MEditerranean RIm WIkiart Project, a text inviting the participation of people from the 21 Mediterranean rim countries was posted on my art blog http://www.wikiartists.us in the many languages of these countries.  Only Hebrew and Greek, the millennia old languages of the indigenous peoples of the Land of Israel and Greece are still in use and continue to be written with the same two ancient alphabets.                  The Hellenistic definition of art as mimesis is reflected in the words for art in contemporary European languages: art in English and French, arte in Spanish, Kunst in German and Dutch, and iskustvo in Russian.  The roots of all these words are related to artificial, artifact, imitation, and phony.  In contrast, the Hebrew word for artist (oman) is spelled AMN with the same letters as the word amen which means truth.  Its feminine form is emunah, faith, and as a verb l’amen means to nurture and educate.

This ancient Greek view of art as mimesis, imitating nature, arresting the flow of life, has become obsolete as new definitions of art are arising from Jewish thought and action that explore issues of truth, faith, and education as they enrich everyday life.  In Thorleif Boman’s  classic book Hebrew Thought Compared with Greek, Hebraic thought  is characterized as being “dynamic, vigorous, passionate, and sometimes quite explosive in kind; correspondingly Greek thinking is static, peaceful, moderate, and harmonious in kind.”  That it is the Hebraic rather than the Hellenistic roots of Western culture that is redefining art in a rapidly expanding networked world is argued in my book The Future of Art in a Postdigital Age: From Hellenistic to Hebraic Consciousness (Intellect Books/University of Chicago Press) and its Hebrew version Dialogic Art in a Digital World: Four Essays on Judaism and Contemporary Art. (See reviews at http://future-of-art.com.)