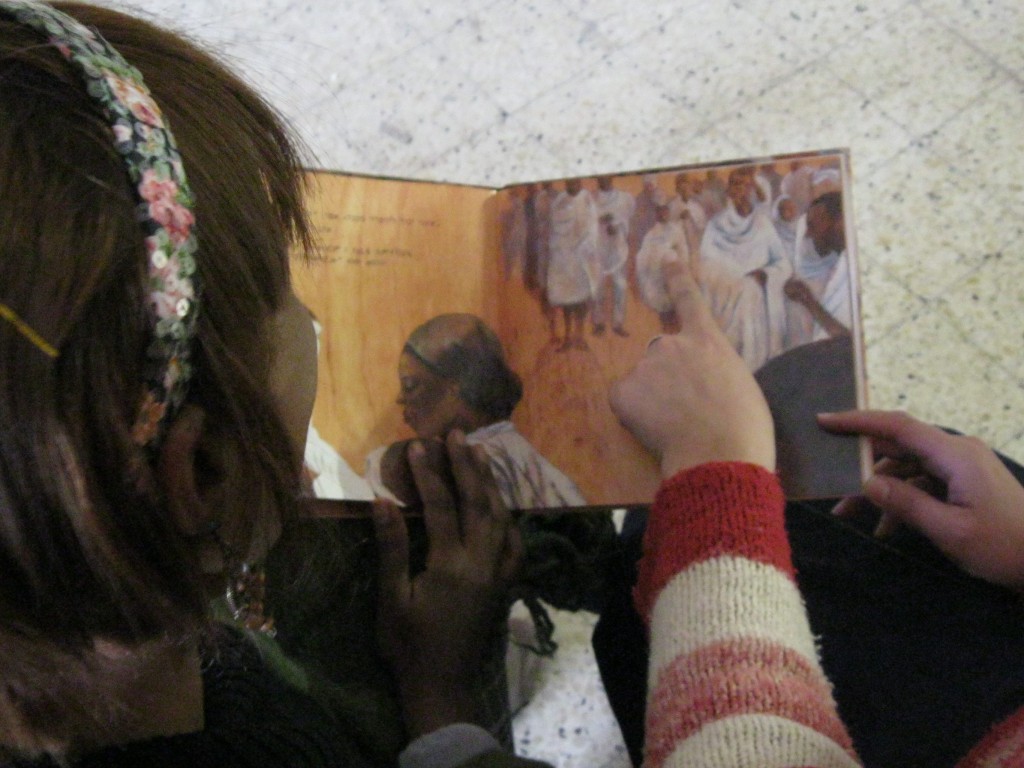 This blog post is the third of a series in The Times of Israel that explores the interface between art, Zionism, and identity in a networked world.

It explores the Zionist miracle of the descendants of the tribes of Judah and Dan who created the Tabernacle creating art together today after more than three millennia apart.  The photograph above shows my students at Emunah College School of the Arts in Jerusalem holding a children’s book created by a student whose parents came home to Israel from Ethiopia. It tells an Ethiopian fable she illustrated with paintings and designed with texts in Hebrew and Amharic.

It also discusses how art imitating the Creator rather than the creation is derived from Jewish consciousness, how spiritual art is created in a playful spirit, and art educating through visual midrash. These ideas are expanded in my book Photograph God: Creating a Spiritual Blog of Your Life http://photographgod.com.

Teaching the descendants of Betzalel and Oholiav in Jerusalem

The Torah describes two prototypic Jewish artists – Betzalel and Oholiav.   “See, I have called by name: Betzalel ben Uri ben Hur, of the tribe of Judah.  I have filled him with a divine spirit, with wisdom, understanding, and knowledge, and with the talent for all types of craftsmanship” (Exodus 31:2).

The literal translation of this artist’s name is: “In the Divine Shadow son of Fiery Light son of Freedom.”  It honors the artist’s passion and freedom of expression.  The Torah describes Betzalel’s partner, “I have assigned with him Oholiav ben Ahisamakh of the tribe of Dan, and I have placed wisdom in the heart of every naturally talented person” (Exodus 31:6).  Oholiav’s full name means “My Tent of Reliance on Father, Son, and My Brother,” integrating the contemporary with its past and future.  Father, son, and brother stand together with the artist in a common tent in mutual support of one another.  Betzalel represents the psychological power of the artist and Oholiav the sociological impact on community.  Working together, they create a shared environment of spiritual power. 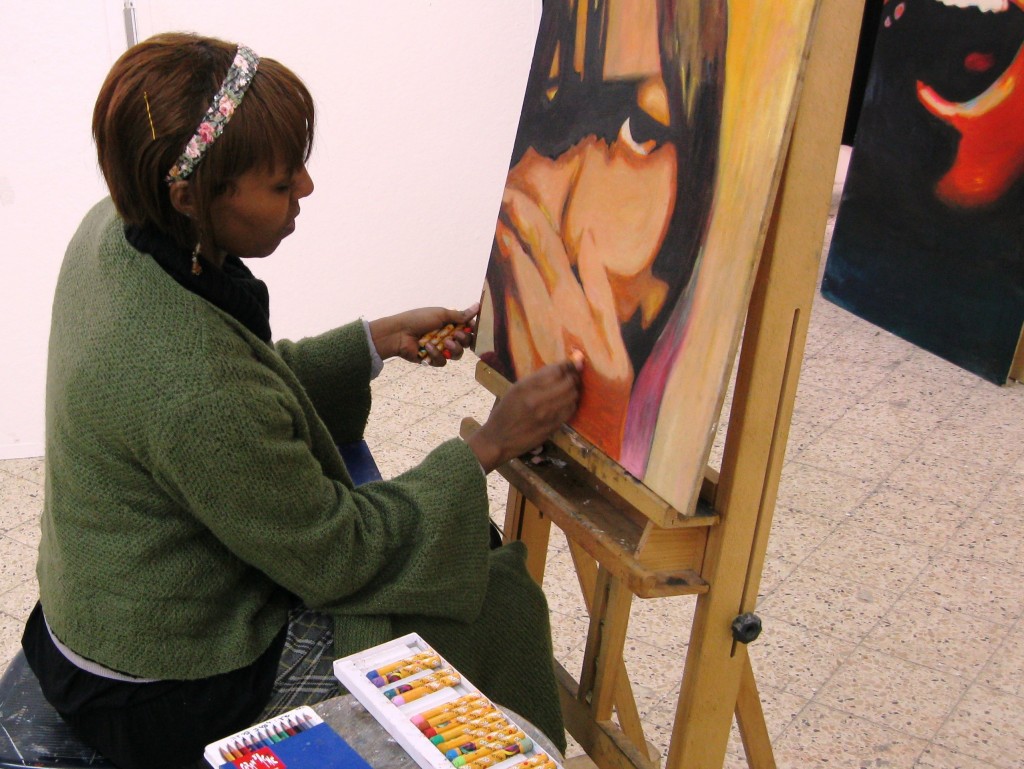 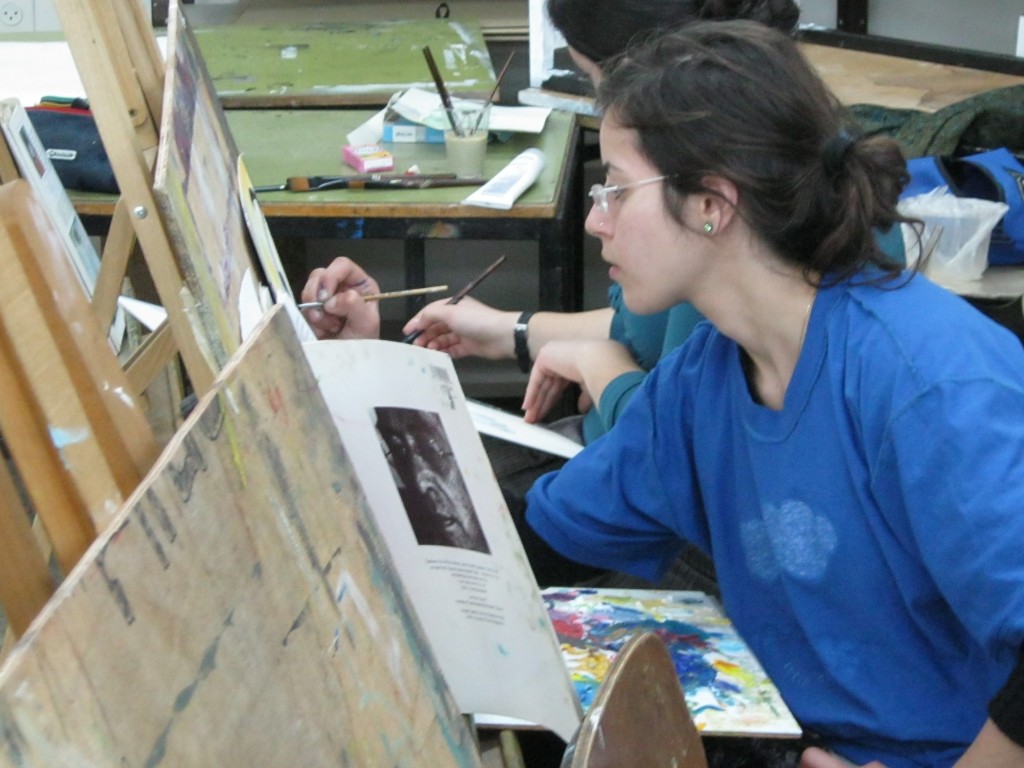 Art imitating the Creator rather than the creation

I am interested in being an active partner of the Creator of the universe in the on-going creation of new worlds.  As a Jewish artist, it is not the Hellenistic vision of a complete and ideal nature to be copied that is the primary artistic value, but it is the emulation of the process of creation itself that is valued.  Therefore, I studied in depth the creative process in art and science from a psychodynamic point of view that I present in my book Aesthetic Experience in Creative Process (Bar-Ilan University Press).

Two millennia ago, the Roman governor over the Land of Israel asked Rabbi Akiva, “Which are greater and more beautiful, human creations or God’s?”  The governor was disturbed by the rabbi’s response that human creation is more exalted than divine creation.  While the Roman was questioning the rabbi’s unexpected response, the rabbi served a plate of wheat grains to the Roman and took cakes for himself.  The puzzled Roman asked, “Why do you take cakes for yourself while you give me raw grains of wheat?”  Rabbi Akiva answered, “You prefer God’s creation.  I prefer the creations of human hands!”

Rabbi Abraham Isaac Kook provides a poetic manifesto for the Zionist artist derived from the deep structure of Jewish consciousness in Lights of Holiness (Orot Hakodesh). Rabbi Kook was the first Chief Rabbi of the Land of Israel and founder of Yeshivat Mercaz HaRav in Jerusalem where my son Rabbi Ron Alexenberg studied.

“Whoever is endowed with the soul of a creator must create works of imagination and thought, for the flame of the soul rises by itself and one cannot impede it on its course…. The creative individual brings vital, new light from the higher source where originality emanates to the place where it has not previously been manifest, from the place that “no bird of prey knows, nor has the falcon’s eye seen.” (Job 28:7), “that no man has passed, nor has any person dwelt” (Jeremiah 2:6).”

Rabbi Joseph B. Soloveitchik proposes that the dream of creation is the central idea in Jewish consciousness – the idea of the importance of human partnership with the Almighty in creating new worlds.  Rabbi Soloveitchik taught at the rabbinical college at Yeshiva University and served as president of the Mizrachi Zionists of America.  He writes in his seminal book Halachic Man:

“This longing for creation and the renewal of the cosmos is embodied in all of Judaism’s goals….  If a man wishes to attain the rank of holiness, he must become a creator of worlds.  If a man never creates, never brings into being anything new, anything original, then he cannot be holy unto his God.  That passive type who is derelict in fulfilling his task of creation cannot become holy.  Creation is the lowering of transcendence into the midst of our turbid, coarse, material world.”

I attempt to act as partner of the Creator during six days of the week.  However, I stop my creative work one day each week and step back to admire and honor the handiwork of the Creator of the universe.  This Sabbath Day is both a Non-Art Day and an Ecology Day.  Emulating Betzalel and his artistic collaborators who stopped building the mishkan on Shabbat, I stop my artistic activities on the seventh day to celebrate Non-Art Day.  Indeed, all Shabbat observance is defined by artistic activity, by the 39 craft categories involved in building the mishkan.  From when the sun sets on Friday evening to the time stars dot the sky on Saturday night, I celebrate Non-Art Day as well as Ecology Day by leaving the world the way I got it.  I replenish my soul on Shabbat so that on the eighth day I can resume with renewed energies the role of partner with the Creator in tikun olam, actively making the world a better place for all humanity.

Art imitating the Creator rather than the creation

As an artist, I engage the Torah in creative play through both my conceptual and aesthetic explorations. The Torah itself teaches us to approach it in a playful spirit.  In Psalm 119:174, we read: “Your Torah is my plaything (sha’ashua).” Sha’ashua is a toy to engage children in play.  In Proverbs 8:30, 31, King Solomon speaks in the voice of the Torah: “I [the Torah] was the artist’s plan.  I was His [God’s] delight every day, playing before Him at all times, playing in the inhabited areas of His earth, my delights are with human beings.”  This translation from the Hebrew original is based on the ancient wisdom on the first page of Midrash Rabba.  God as the master artist played creatively with the Torah, His plan for creating the universe. Midrash Rabba uses these two verses from Proverbs to explain the first words of the Torah, “In the beginning God created.”  God first created “Beginning” referring to the Torah as an open-ended blueprint for creating the world.  We learn this from an earlier verse, Proverbs 8:22, “God made me [the Torah] as the beginning of His way, before His deeds of yore.”  In human emulation of God’s delight, we are invited to play with the Torah as we create new worlds.

Rabbi Abraham Isaac Kook wrote a letter of congratulations on the founding of the Betzalel Art School in Jerusalem in 1906.  By way of allegory, he refers to the revival of Jewish art and aesthetics after two thousand years of exile as a child in a coma who awakes calling for her doll.

“The pleasant and beloved child, the delightful daughter, after a long and forlorn illness, with a face as pallid as plaster, bluish lips, fever burning like a fiery furnace, and convulsive shaking and trembling, behold!  She has opened her eyes and her tightly sealed lips, her little hands move with renewed life, her thin pure fingers wander hither and thither, seeking their purpose; her lips move and almost revert to their normal color, and as if through a medium a voice is heard: “Mother, Mother, the doll, give me the doll, the dear doll, which I have not seen for so long.”  A voice of mirth and a voice of gladness, all are joyous, the father, the mother, the brothers and sisters, even the elderly man and woman who, because of their many years, have forgotten their children’s games.”

Rabbi Kook saw artists at work as a clear sign of the rebirth of the Jewish people in its homeland.  Their playful spirit nurturing sensitivity for beauty “will uplift depressed souls, giving them a clear and illuminating view of the beauty of life, nature, and work.”

Not only are the Hebrew words for ‘artist’ and ‘educating’ related, but the Torah teaches that Betzalel and Oholiav are divinely endowed with artistic talent coupled with the talent to teach (Exodus 35:30-34). Creating art can be an alternative method of Torah study that beautifies the mitzvah of study through creating visual midrash. Midrash is the unique Jewish literary form that combines commentary, legend, and narrative explanations of biblical texts.  In a sense, midrash fills the spaces between the written words to reveal deeper meanings of scriptural passages.  Art as visual midrash provides fresh commentaries on biblical texts through multimedia experiences that extend the verbal exploration of text into visual realms.  ‘Context’ in its primal meaning is ‘with text’ while context is the defining characteristic of postmodern art.

In order to better understand the cultural context of my values as a Zionist artist in an era of globalization, I invited renowned art educators worldwide to redefine art and art education at the interdisciplinary interface where scientific inquiry and new technologies shape aesthetic and cultural values – local and global.  This inquiry resulted in my book Educating Artists for the Future: Learning at the Intersections of Art, Science, Technology, and Culture (Intellect Books/University of Chicago Press) http://future-of-art.com.