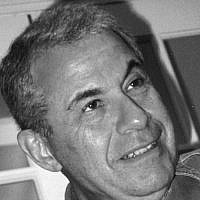 The Blogs
Norm Klinger
Apply for a Blog
Please note that the posts on The Blogs are contributed by third parties. The opinions, facts and any media content in them are presented solely by the authors, and neither The Times of Israel nor its partners assume any responsibility for them. Please contact us in case of abuse. In case of abuse,
Report this post.

I abhor the following Facebook post by a frequent commentator: “Trump did more for Jews than any other president!” This Jewish angle got me to drill down into the Trump-Jewish connection and how Jews were being played politically.

I am an American. Classifying me further is divisive.  Such class division is Trump’s strategy to get Jewish votes. Jews who fall for this are being fooled. To lump all Jews together opens all Jews to attack. You can love America and you can love Israel without agreeing with Trump or Israeli Prime Minister Benjamin Netanyahu.

I was raised as an active “kid Zionist” in Egypt. My group was Ha Ivri Hatzair. My older brothers were part of the Hashomer Hatzair. Our Zionists youth groups were outlawed when Egypt attacked the new State of Israel in 1948.  We continued to meet clandestinely. Patriots for Israel visited us. “Bill”, a big ex-Air Force American, showed up one day on his way to train the new Israeli Air Force. “Shlomo”, a Jewish sergeant in the British army, and a spy for Israel, brought regular reports on the 1948 war. The consequences of being caught were terrible. Two of my brothers joined the Haganah, the precursor to the Israeli Defense Forces. David, my oldest brother, went over to “Palestine” at age 19. To qualify for clandestine transport, he was assigned the mission of “appropriating” a serious weapon. David served in the original incarnation of  Shayetet13 and blew up railroads in Cairo, as reported by Shlomo. Simon, another brother, went over at age 16 via Italy. At age 17 he was allowed to carry a real weapon instead of a wooden rifle and ended up in intelligence.

In 1950, I emigrated to the United States. I love America. I love Israel. I want what’s best for each. I won’t let myself be pitted against one or the other or manipulated to support a politician who wraps himself in flags, props for a performance to con voters. Such a politician wants you to think of him and the flag as one. If you love the flag, you have to love him. If you don’t salute when he tells you to, you are disloyal to America. If you don’t support his courtship of Israel, you are not a good Jew.

To lock up the Jewish vote, this politician latches on to Prime Minister Benjamin Netanyahu. The Prime Minister is a superb and intelligent politician. He knows how to use such a sycophant. Not all Israelis agree with Netanyahu’s policies. That does not make them disloyal to Israel. A great many serve in the IDF and reserves or are veterans. But, the American Jewish lobby wants you to believe that if you are a Jew, you must support this politician. Otherwise, you hate Israel. They say so openly. They want you to donate to Jewish conservative lobbies that support a far-right agenda in U.S. governance. If you disagree with them on Facebook, some get unpleasant, even using four-letter words. They are small in every sense, but well-organized. They are wrong for me.  They are wrong for Israel.  They are wrong for Jews.

And now you know why I abhor the claim that “Trump did more for Jews than any other president.”