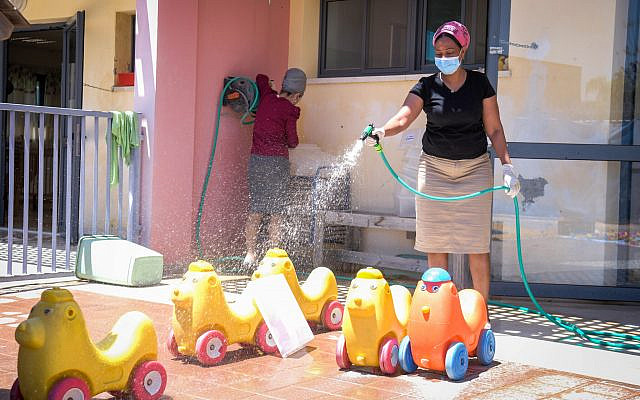 Kindergarten staff clean in the city of Modiin on May 7, 2020. (Yossi Zeliger/ Flash90)

The lifting of most coronavirus-induced restrictions has been greeted in Israel, as in most other countries cautiously emerging from the crisis, with a mixture of relief coupled with considerable uncertainty. The sense of liberation from the confinements of lockdown and the rush to resume familiar routines is giving way to an understanding that even if the immediate threat of COVID-19 is receding for now, its effects may be more lasting than one could have imagined. Not only do health concerns persist, but human security issues are multiplying. What is becoming increasingly evident is that the by-products of the pandemic may be more lasting than the disease itself.

These present immense strategic challenges, but also extraordinary opportunities. With few exceptions, reverting to the status quo ante is not feasible — just as a wholesale adoption of innovations designed to cope with the closure is inadvisable. On every front — in education, the workplace, the home, healthcare, social relations, the public arena — it has proven impossible to either restart life as if nothing has happened or to ignore the experiences and lessons of the past two months.

Adjustments must be made. How these are carried out will prove to be the true test of Israel’s ultimate resilience. Initial steps have not been promising. Traffic jams are back to pre-corona days, but public transportation is operating at half-steam. Some people are returning to work, but too many have lost their jobs and their employment prospects are dim. Certain businesses are booming, while too many others do not have the wherewithal to reboot. The reopening of the education system is not only partial and utterly confusing, but also annoying and potentially counterproductive. Medical facilities are resuming non-corona care, yet the backlog may be well-nigh insurmountable, as new demands for services (mental health, for one) soar. Economic concerns are mounting. In many areas, near-chaos reigns.

These developments are not just an outcome of lack of coordination or incompetent implementation: they are, above all, a function of strategic occlusion. The goals of reentry are poorly defined or markedly skewed. Measures in one area are not linked to those in other spheres. In the rush to return to an unattainable “new normal,” the root causes of many prevalent problems are being studiously ignored. To emerge from the coronavirus crisis both robust and reinvigorated, Israel must decide whether it is merely going to restore as much as conceivable of what was, or whether it will build on recent changes and begin to address the structural foundations of many of its current predicaments.

A closer look at what is going on in the field of education sheds light on the implications of these options. The Israeli education system entered the corona crisis with cumulative handicaps. These included deteriorating performance on key comparative measures, with especially worrisome results in basic language skills, mathematics, and English. Inequality prevailed, with pronounced differences between low- and high-income groups, between center and periphery, and between specific groups (with especially poor showings among large segments of the ultra-Orthodox, the Arab community, Ethiopian-Israelis and Mizrahim). Provisions for special needs children were inadequate and after-school programming (along with accompanying hot meal facilities) sporadic at best. The closure of the entire education system on March 13, 2020 only magnified these problems — while adding quite a few more as well.

The school year — from kindergartens to institutions of higher learning — has been entirely disrupted. For a few weeks, no alternative routine was introduced. When long-distance learning schedules were finally determined, these excluded special education and children at risk, as well as those with a host of learning handicaps. More problematically, students without computers or accessible internet connections were immediately at a disadvantage, unable to benefit from the resources available to their more privileged cohorts. Divergent domestic environments, parental skills, and supplementary incentives further exacerbated already existing discrepancies. And for all involved — from parents and teachers to students at all levels — the need to adopt to new forms of instruction proved unquestionably challenging.

The rush to reopen the educational system as soon as possible has been explained not only by the importance attributed to education in general, but also by the need to free working parents from childcare, thus expediting their return to the labor force. The manner in which this policy has been carried out has been, to put it mildly, discombobulating. Last week grades 1-3 and 11-12 went back to school, but only in staggered groups, resulting in barely 60 percent attendance. Yesterday, pre-school frameworks were opened. Those in kindergarten are expected to attend only three days a week. Day care centers, catering to infants and toddlers, have been forced to exclude some 40% of their clients, leaving many fully employed parents with no solutions for their children. Grades 4-10 are still at home, slated to go back within the next few weeks when appropriate arrangements are made for their intake. Special education facilities have been reopened, although the daily schedules of this sensitive group have been fragmented or disrupted. Only boys have resumed studies in ultra-Orthodox schools. Universities and colleges, the last slated to reopen just as the academic year is about to end, are still dependent entirely on long-distance learning.

Under these circumstances, it is hardly surprising that some parents and students are content to take what they can get, the majority remain befuddled, still more are angry, several are completely distraught, and many feel either neglected or ignored. Only a select few in this most important age category in the workforce have been released from almost full-time childcare and are able to go back to their jobs — or to begin the by-now almost Sisyphean quest for decent employment.

Even if most of these initial glitches are ironed out in the coming weeks, will these steps suffice to put the floundering educational system back on track? The answer is a resounding no. At best, they will help the institutions revert to their problematic pre-corona state, without increasing their capacity to address the new issues that have arisen in recent months. At most, these measures will only serve to exacerbate the growing inequality and inflexibility ingrained in the system.

The only way to avert this outcome is to take advantage of this novel situation to rethink both the structures and the substantive emphases of the existing framework and ensure that any immediate steps are in line with such a revised vision. If, indeed, the main objective of contemporary education is to nurture inquisitive and sensitive citizens with ample tools to pursue their diverse interests while enhancing the common good, then equality and diversity should become central educational yardsticks.

In real terms, this means reorganizing the curricula to reflect these goals, and establishing a minimal baseline for all students. It also implies that a fundamental restructuring is in order. The first, and most urgent, step requires aligning the school day with the workday. For too many years, the lack of synchronization between the two has helped to sustain gender inequality, adversely affected women’s participation in the labor market, induced widespread income inequalities and, significantly, reduced productivity. Admittedly, such a move would go against the wishes of the teachers’ unions, which have jealously protected their abbreviated work days (at the expense of their income levels), but it will offer them substantial compensation for adjusting their routines while giving a much-needed boost to the possibility of rapid and more equitable economic recovery. It will then be easier to address the knotty question of how to inject more creativity and flexibility into the various educational streams (general, religious, Arab and independent), while introducing more meaningful learning and evaluation methods in the process.

Needless to say, such a strategic redesign radiates to numerous other areas of life: the economy, social welfare, the health system, climate change, social relations, and even to the domain of politics. Indeed, the reformulation of strategies in each of these areas and the understanding of the critical linkages between them may be the best way to take advantage of the solidarity and goodwill that developed during the crisis and are central to the revision of the divisive structures and norms of yesteryear (some of these have already been sketched by independent teams of experts and can easily be extended to other spheres).

This kind of approach is the only method of capitalizing on the present crisis in order to effect significant, equitable and relevantly agile social change. The cost of launching such an approach is much lower than that involved in resurrecting flawed systems and practices that threaten to intensify economic uncertainty and augment societal disarray. This is the real challenge of these unusual times.