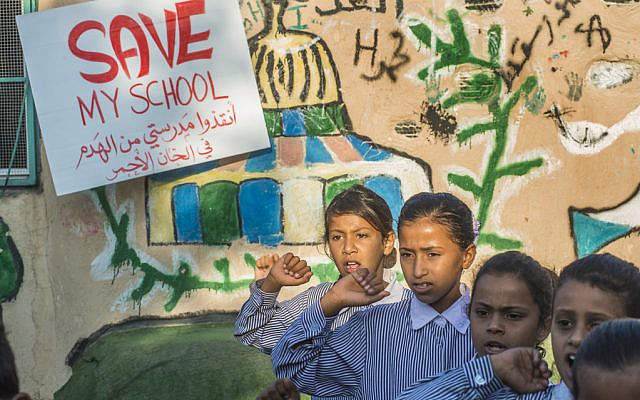 Amid reports that the European Union will unfreeze millions of euros worth of aid to Palestinians this June, experts have warned that such commendable efforts towards alleviating Palestinians’ suffering, could prove detrimental without adequate safeguards to guarantee how such funds would be dispensed, and more importantly to whom.

NGO Monitor, an organisation which has committed itself to mapping out Terror’s links to NGOs in view of denouncing the weaponization of humanitarian aid, immediately rang the alarm, reminding all decision makers that little, if anything, had changed since the ‘freeze’, by way of preventing well-known militant groups from playing the system, and thus reroute funds to support their violent agenda.

In late 2018 news broke that under EU funding the Palestinian Authority had developed educational material for school children inciting violence against both the State of Israel and the Jews, calling for pupils to “sacrifice their lives in the name of religion.” A comment published by the Jerusalem Post at the time reads on the matter: “The textbooks published by the PA in 2017, which are financed by the EU … contain, across all subjects, numerous examples of violent depictions, hate speech – in particular against Israel – and glorifications of jihad and martyrdom.”

Concerns then over the possible misappropriation of EU funds towards the promotion of such radical views led to an immediate European Parliament committee’s vote to withhold payment until such a time when all antisemitic material has been duly removed. Party to the IHRA (International Holocaust Remembrance Alliance) definition on what constitutes antisemitism, the EU has held since 2016 that “the non-legally binding definition is an essential tool for the Commission’s work on tackling antisemitism.”

The largest backer of the Palestinian Authority, the EU has been instrumental in financing the Palestinian education system, as part of its global effort to promote, in the words of European Commission President Ursula von der Leyen, “An independent, democratic and viable Palestine existing side by side in peace with Israel.”

If few will argue against the need to offer humanitarian assistance to those communities most in need, notwithstanding the decision by the EU to actively support Palestinians’ democracy-building efforts over the decades, guarantees ought to be put in place to ensure that funds are not redirected towards Terror – to do otherwise would make our Western capitals parties to unpalatable crimes.

And though antisemitism, or rather, the promotion of, which has been rampant in the Palestinian education system, a by-product of the narrative pushed by such groups as Hamas, was quite rightly flagged by the EU, such violations to the dignity of our secular democratic values pales in comparison to the agenda certain beneficiaries of EU funding have proven to push.

In a report published in the summer of 2020 NGO Monitor flagged direct links between the recipients of EU-backed humanitarian grants and well-known terrorist organisations between 2011 and 2019 – an estimated dizzying 38 million Euros.

As it were, the issue of misappropriation is not limited to the publication of hateful words in school manuals, however heinous this may be, and instead speak of a concerted and structured effort to exploit the EU financial largesse to serve illegal agendas. In view of such findings, one would most definitely encourage a more strenuous vetting process. To think that the EU’s terror list only includes the names of organisation such as that as Hamas, PFLP, Islamic Jihad etc … leaving out the names of individuals and entities tied to the above networks boggles the mind. In practice, an individual overtly tied with Hamas could be afforded a grant under the EU funding system just as long as his or her name does not appear verbatim on one of the lists of EU restrictive measures.

And though one may understand that in view of the economic hardship many communities in the Palestinian Territory face, many actors will continue to advocate expediency, EU officials would be, through obstinate negligence, not only perpetuating terror, but somewhat normalising its activities by plugging its networks to that of the global humanitarian community.

Following her meeting with Palestinian Prime Minister Mohammed Shtayyeh earlier this week, EU President von der Leyen announced that a previous freeze on 2021 funds would soon come to an end and all monies disbursed accordingly. Little was said, if at all, of her office’s dedication to strengthen its patronage efforts beyond the promise that “EU vetting rules make the participation of entities, individuals or groups of individuals affiliated, linked, or supporting terrorist organizations incompatible with any EU funding.”

“I am very glad to announce that the EU funds for 2021 can be disbursed rapidly. All the difficulties are gone. We have made clear that the disbursement will take place. So I am happy to announce that here today together with you,” von der Leyen confirmed at a press conference.

It serves to mention that such ‘unfreezing’, came, as emphasized by the Palestinian Premier “without conditions” – hardly what any observer may have expected, especially in light of the recent violence terror’s protagonists have unleashed onto not only Israel but the world Jewish community by way of attacks and threats of further violence against their interests.

Our commitment to provide humanitarian assistance to Palestinians and apply ourselves to accompanying them in their democratic aspirations cannot exist in a vacuum, and the urgency of communities’ needs – however dire they may be, cannot and should not justify laxity; not without running the risk of endangering not only our legal standing but our society as well by propping up Terror.

Pragmatically speaking the European Union also stands the risk of disparaging Israel’s political goodwill towards its capitals at a juncture of time when the bite of Russia’s energy crisis requires the intervention of alternative partners.

If Israel, Egypt and the EU signed a Memorandum of Understanding in relation to the supply of gas this June – yet another important milestone towards normalisation, any threat to Israel’s national security, by omission or lack of oversight, is likely to impede progress in forging new ties and new energy networks, away from Russia’s influence.

The takeaway here is that our collective humanitarian efforts should always prioritise due process, and not fall prey to the fallacious argument that expediency saves lives.